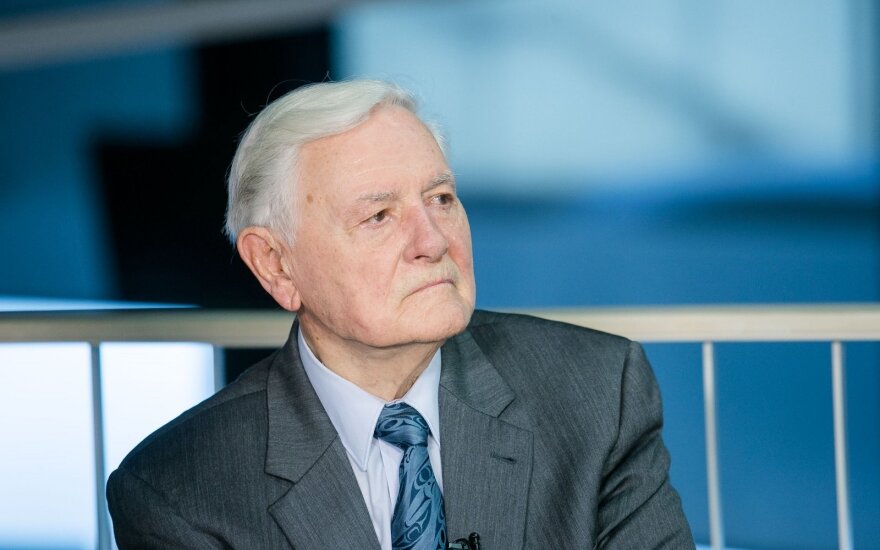 An international policy conference hosted by former President Valdas Adamkus will be held in Vilnius on Tuesday. Its goal is to gather the best minds of the Eastern region, to renew regional leadership and help establish robust security for the Eastern region. The new initiative was discussed with former President Adamkus and members of Seimas, former ambassador Žygimantas Pavilionis.

- Mr. President, what is the goal of this initiative?

V. Adamkus: Tensions abound across the world everywhere you look, be it Europe or Asia, or even intercontinental links. We are most concerned with the East. The European Union should be a firm gathering of European nations, but it is fracturing. We clearly see the British stance, doubts over the situation in Poland are arising, it is unclear what the next step will be. What is most important, being a part of the Eastern region, is that we are concerned with security and how to establish it in the region. Currently there is no feeling of leadership in the Eastern region. Now is exactly the time to seriously talk, speak up where and for what we stand, thus ensuring our own safety. The EU is split into diverse regions – south, internal and etc. Let's be honest, does the Southern region care about the Baltic States? Other examples can also be presented. Our goal is to attempt to consolidate strength in Eastern Europe, specifically join the Baltic States, Poland the rather detached Scandinavian states. This would form an important core for Eastern region leadership, which would be able to speak in a united voice even in the EU itself. Many things have happened that are being downplayed and kept silent. The matters I am most concerned with are the Crimean occupation, the occupied areas of Georgia that have been completely forgotten by everyone. It is unclear how effective applying sanctions is against Russia. The question is whether we are truly concerned with effective regional safety. Finally it is a question of not just regional, but the safety of the entire EU.

- Mr. Pavilionis, you are one of the chief organisers of this conference. Do you plan to make this into an annual foreign policy forum?

Ž. Pavilionis: I believe we can all agree that such a forum needs to be held annually. So that we would gather the best minds, the best strategists and halt further Russian encroachment. Russia has been winning on various fronts for eight years now. The hopes sparked in both Kiev and Tbilisi have faded somewhat. There are many fires on the frontline, but the recipe found in the president's time, when chaos abounds and there is a lack of leadership, would also work now, the region need only unite. Let us join our ideas, join our best leaders and seek to present recipes to President Trump and Chancellor Merkel which would inspire them. We cannot expect that they will take charge in this region just because we think so, that will not happen. We have to prepare it for them. Once President Adamkus and President Kaczynski prepared a full plan of energy security which later became part of the Lisbon Agreement, later American policy. But is this the only sphere we can lead in? Perhaps we can consider how to counter Russia on various fronts. If we do not do it, Russia will come through all sides.

- Mr. Adamkus, there is much talk of the incoming Zapad exercises. More than 100 thousand troops will participate. There are those who claim that tens of thousands of Russian troops will remain in Belarus. How do you view such a scenario?

V. Adamkus: You remind of the Lithuanian case. 10 thousand Russian troops remained in Lithuania, following which the country was erased from the map. To me it appears that considering such a possibility, I doubt Lukashenko is so naïve as to not understand this from historical lessons. I do not believe that he could be traitor to his nation and would allow the Russian troops to remain, returning Belarus to the Russian zone of influence. I believe that Lukashenko will be resilient and will oppose Putin's plans.

Ž. Pavilionis: I will make a few historical allusions. President Adamkus at the end of his term was the president who said that Crimea would be next after the events in Georgia in 2008 when the West essentially did nothing about Russian tanks and forgave the occupation. It was described as the Munich of the 21st century. At the time no-one listened to the president, Russophobes isolated him. The same happened in Crimea. The USA definitely saw what was being prepared and allowed it. And then reacted. We cannot allow this creeping Russian occupation to move forward. We have to unite and understand that when Russia or other countries spark other conflicts, be it North Korea or Syria, we must hold the world's attention centred on our region. Trump's new representative for Ukraine Kurt Volker is coming here, we are partially to thank him for our NATO membership. For example he has the idea to arm Ukraine, offer adequate military support as deterrence. And this way, to gradually push Russia out of those territories with sanctions. Half the conference will be dedicated to Ukraine. Former presidents are to participate, mister Yushchenko, as well as current foreign policy makers; we will discuss. Our role is particularly significant in Ukraine. We want to find joint decisions so that we can halt Russia's encroachment on our territories.

- Mr. President, are you also of the opinion that Lithuania is not sufficiently visible in the region?

V. Adamkus: Facts speak for themselves. We no longer see the same sort of activity as during the events in Kiev or Georgia. We are passive observers now. Yes, we do speak up in protest, stating it is unacceptable and we will not recognise it, but we have to keep this question alive in the international community. We have to speak in one voice that we do not recognise it and if need be we will provide support. Ukraine lacks modern weaponry and other equipment. We are hearing from American congressmen that Ukraine will not be provided weaponry and such. The spread of such an idea is a danger. Instead of supporting an active position, we would only speak of sanctions. As for them, they have their highs and lows, some work, others don't. Meanwhile the Kremlin continues to plot in peace. The manoeuvres proceeding near our borders could be the beginning of larger aims.

Ž. Pavilionis: I would also like to highlight the educational and moral aspects of the conference. K. Volker was recently the director of the McCain Institute and they had a programme – moral political leadership. They wanted to nurture moral leaders. We would very much like to inspire the young people who volunteered in organising this conference, to teach that which President Adamkus did in his time. Though the situation in Kiev and Georgia looks hopeless, hope, vision and intellectual capacity to join the region and propose solutions can go very far. Who thought that American gas would reach us when we began on the terminal? Nobody did. We had other visions, we had a nuclear vision, but stopped it ourselves. It took much time to overcome various challenges, but we succeeded. While our body may look small and the situation hopeless, believe because it is the power of the mind, the power of vision. If you are a member of the EU and NATO, you have ample contacts. You can pick up the phone and make calls. If you need to close down Astravyets, make calls. Is Prime Minister Saulius Skvernelis demonstrating such leadership right now? No.

- Nevertheless, if such a conference become tradition, what goals would it have to pursue in the long term, Mr. Adamkus?

V. Adamkus: I do not believe it should be called in my name. To my understanding this conference has to contribute to Eastern regional leadership. If this happens, it would commit all the states in the east to stay vigilant and raise, rather than permit. Take Georgia again, its territory is annexed. Everyone calmly went silent, everything has been hushed up while Moscow rubs it hands in satisfaction. If everyone's silent, perhaps afterwards we will make another step. As such the goal is to keep an honest commitment to democracy and freedom alive for all time. And if need be to react in unison rather than start considering what sanctions could work. If I was successful in gathering and keeping these states together and this level and commitment in defending not only their own security, but maintaining that of all of Europe, we would maintain a confident, democratic and safe territory, allowing the people to work in peace and create the future of tomorrow.