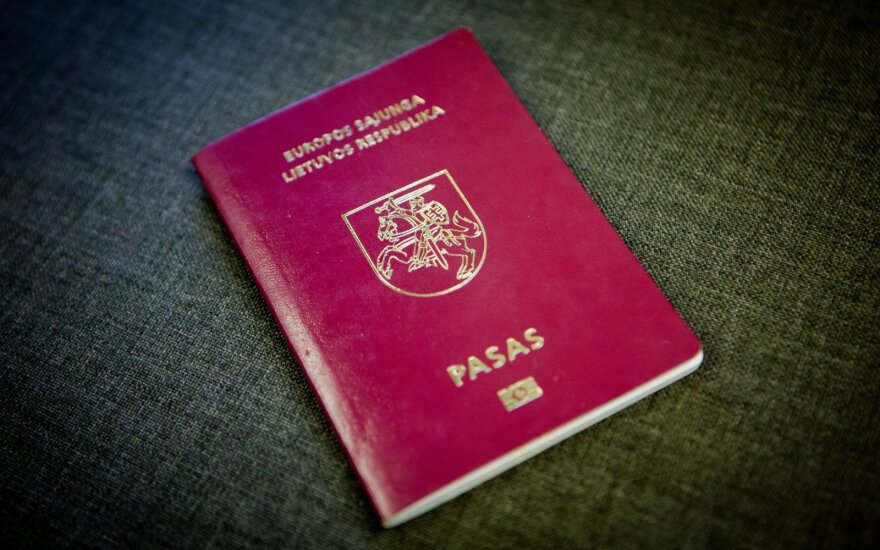 Knowing how actively Lithuanians abroad participate in elections, we should not expect that they will actively speak up on dual citizenship, Foreign Minister Linas Linkevičius told LRT Radio. According to him, it will be those living in Lithuania, who will have to decide on the matter. Lithuanian World Community chairwoman Dalia Henke also highlights this. According to her, solely the votes of those living abroad would not suffice if everyone, who had the right, would vote, lrt.lt writes.

According to MP Agnė Širinskienė, of all the dates being considered, that of the presidential elections would be the most suitable. According to the member of Seimas, so far a decision has not been made whether the voting should be held over one or two days.

"The workgroup is leaning toward a two day referendum during the first and second round of presidential elections. It was calculated logically, why we wish to do so. We have data that around 8% new voters come for the second round. That 8% is a truly significant number," A. Širinskienė says.

According to her, the referendum votes received over the two rounds of voting would be summed. The MP highlights that in such a case, the security of the ballots would have to be ensured: "Security measures will definitely have to be put in place to leave no doubts over the validity of the presidential elections and the referendum itself."

Lithuanian World Community charwoman Dalia Henke reminds that the LWC spoke of three conditions related to the referendum already in 2015. Firstly – to reduce the referendum barrier, secondly to establish electronic voting and thirdly that all parties and top institutions would agree on the referendum.

"And the date should be selected so that we would be able to prepare, so that people would understand, Lithuanian citizens participating in the elections would understand what they are deciding and how important it is to Lithuania, the nation, survival. It matters now that we live elsewhere in the wide world. [...] We must make all efforts, be it in 2020 or be it the coming presidential elections or perhaps the next Seimas elections," D. Henke stated.

She is echoed by the co-chairman of the parliamentary Seimas and Lithuanian World Community Commission Rimvydas Baltaduonis. According to him, the date must be selected to help resolve the question of dual citizenship. In his opinion, while the referendum's bar was lowered, it remains high.

"It will be a significant challenge, but we also see other steps. Every serious organisation, serious company, which enters a new market or wishes to make a serious decision, must perform analysis, how people view the situation, what questions are important to them, can they be resolved or not. [...] Currently, to our knowledge, there is a study being performed, which will help answer at least part of the questions we have posed," R. Baltaduonis says.

L. Linkevičius: we must understand there are not that many of us

Foreign Minister L. Linkevičius states he supports the idea of dual citizenship. Nevertheless, the minister doubts the Constitutional Court will not rule the Seimas decision to be anti-constitutional: "But this will not change the situation because we must make a choice among two options: either do or don't. I would suggest going ahead and finally ceasing wandering in confusion because we can only resolve this through a referendum."

The minister also believes that a date must be picked for the referendum that would allow for maximum voter turnout: "The presidential elections are such a date. I would even propose to not lose courage if it would not work out. We can repeat the referendum. [...] I believe we must understand that there are not that many of us in the world."

The minister is convinced that such an understanding is growing, however whether we are prepared for it will be revealed by the referendum results.

"If people have concerns or doubts, let them ask those questions. I believe that we have sufficiently many strong arguments in favour. We must only be more active in expressing them. [...] We must realise that we need not point fingers and blame one another. If we lose, we all lose," the foreign minister said.

He emphasises that we should not hope for Lithuanians abroad to be overly active in voting on dual citizenship. According to L. Linkevičius, it will be those living in Lithuania who will have to decide: "With all respect, knowing the activity of voting abroad (of course their opinion is incredibly important), it will probably be the votes of those living here which will prove decisive. It is usually like that. As such, we must campaign intensively in Lithuania as well."

"If we look historically, how such a high bar appeared, [...] simply when Lithuanian independence was re-established, there were concerns of threats from Eastern countries. Specifically article 12 regarding dual citizenship and limitations appeared in an atmosphere of fear when we still had the Soviet military here, which could have exploited the right of dual citizenship. Specifically because of that. [...] I believe that over 30 years of independence the situation definitely changed."

In A. Širinskienė's opinion, we now have the opposite situation, where we wish to tie fellow countrymen to Lithuania with stronger bonds. "I truly hope that the Constitutional Court, which reads the Constitution in a certain historical context, will read it in a contemporary context, not that of 1990. [...] If not, perhaps it will be ruled that we can lower the bar for the whole first section," A. Širinskienė said.

According to D. Henkė, not only the referendum bar matters, but the wording as well: "Up to now our jurists, the Lithuanian World Community has stated that the Lithuanian Constitution was written incredibly accurately and there is no need to change anything there. For this we have the citizenship law, which already mentions nine of ten exceptions, based on which more than 25 thousand Lithuanian citizens also have other citizenships."

She states that in order to resolve the question of citizenship linked to people, who departed Lithuania after 1990, it could also be done by amending the citizenship law: "But we placed this aside and are proceeding with Seimas rulings, with the president's rulings, with the cabinet's decisions and say that we will not sacrifice unity for citizenship and that we are going together."

Divisions among Lithuanians abroad as well

When it was pointed out that divisions on dual citizenship are also present among Lithuanians abroad because first wave emigrants criticise those departing now, R. Baltaduonis states that those, who already have dual citizenship, should not be critical.

"It is easy to say that dual citizenship is unnecessary when you already have it and make use of all the rights and duties of the citizenship. To me the argument comes across as weak then. To unite two or three generations – that's a challenge. [...] We see that certain communities have already built that bridge. And specifically the communities that have done so are the strongest, most creative and can contribute to the thriving of Lithuania," R. Baltaduonis assured.

D. Henke also states that it should not be expected that it will be Lithuanians abroad who will suffice to vote in dual citizenship. According to the LWC chairwoman, while it is often said that there is more than a million Lithuanians abroad, only a part of them have the right to vote.

"I wish to remind of the numbers, of the Lithuanians living abroad, only 301 thousand have the right to vote. [...] this is VRK data. We must have this number in mind all the time. [...] Some say that those abroad just need to vote and everything will be sorted. No. Those living in Lithuania will decide, Lithuanian citizens will decide," D. Henke emphasised.

A. Širinskienė stated that while the Seimas is usually noted for varied opinions, a majority is forming regarding dual citizenship: "I believe that the majority will be capable of making decisions which will be favourable to the dual citizenship referendum. [...] Now the main priority for both cabinet and Seimas should be the question of dual citizenship."

The Commission for Coordination of Affairs of Lithuanians Living Abroad is meeting on Tuesday for...

The Lithuanian World Community (LWC) expect the Constitutional Court to rule in favor of the...

The Seimas of Lithuania has lowered the threshold for the adoption of constitutional amendments on a...