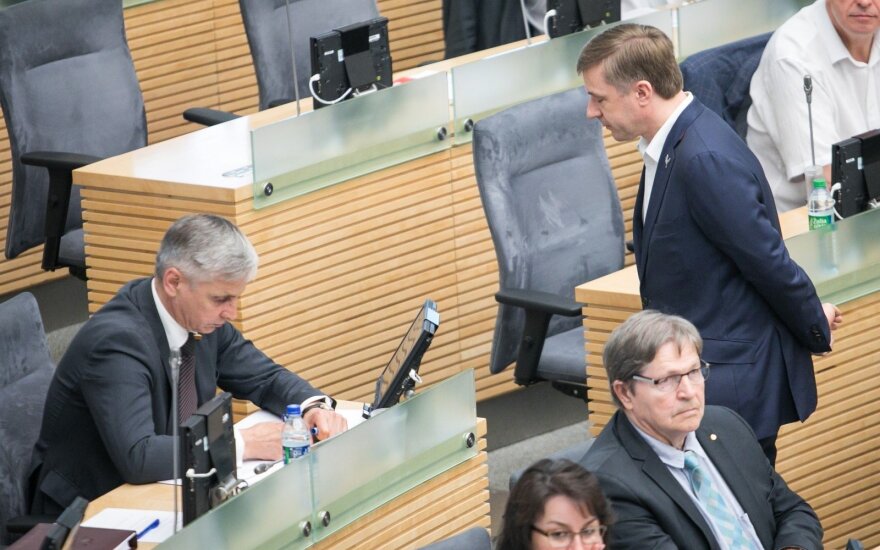 Seimas "Farmer" group member Povilas Urbšys has been removed from the parliament's prefect gathering. Group prefect Ramūnas Karbauskis assures there will be other decisions regarding the politician.

Gathering on Thursday morning, the Lithuanian Farmer and Greens Union (LVŽS) Seimas group decided to remove the head of the State Government and Municipal Affairs Committee P. Urbšys, who is a non-partisan member of the group, from the Seimas prefects' gathering.

The main objective of the Seimas prefects' gathering is to discuss the Seimas session work programme, meeting agendas and approve them, coordinate matters of Seimas committee and group work organisation, propose solutions regarding these questions to the Seimas and management, also to present suggestions to the Seimas speaker. Every group appoints one representative per 10 group members to attend the gathering.

After removing P. Urbšys from the gathering, the "Farmers" delegated party member Viktoras Rinkevičius instead.

According to LVŽS leader and group prefect in Seimas Ramūnas Karbauskis' statement to Delfi, this decision regarding P. Urbšys is not the last to be made regarding the politician.

"Everything depends on Povilas' continued behaviour and such, but so far the situation is unchanged, thus the group will continue to think, how to resolve it," the LVŽS leader said.

Delfi reminds that R. Karbauskis urged P. Urbšys, who has been frequently critical of both the "Farmer" leader and the group's decisions, to resign from the group already last week. P. Urbšys is delaying this, stating that he seeks to safeguard the LVŽS group from wrongful decisions.

When asked why the LVŽS group is not stepping in to expel P. Urbšys itself, its prefect told Delfi there's no hurry.

"P. Urbšys' actions are well thought out and intentional. The decision to simply remove him from the group in one go would be too little of a reaction to what he has been doing for a number of months. There will be decisions, which will show one after another, what the group thinks of his views on work. We are in no hurry," R. Karbauskis said.

According to the LVŽS leader, recently he has had a number of questions regarding P. Urbšys' honour, particularly after recent information that the Special Investigation Service (STT) Panevėžys office, which was previously led, performed analysis and uncovered risks of corruption in the city. The city is led by Rytis Mykolas Račkauskas, who is a representative of the civic movement Kartu gathered by P. Urbšys.

"The investigation shows that P. Urbšys knew and knows, what is going on in Panevėžys and did nothing to change it despite having all the tools at hand. As such, we could see, could hear and understand because people talk, but we did not have factual proof. Now it appeared and I believe that P. Urbšys' reputation has collapsed. It was not us, who did this, it is revealed by investigations because an individual, who talks of wanting to protect something from wrongful decisions, should answer to the people of Panevėžys himself, why the government, which he "raised" is corrupt," R. Karbauskis said.

When asked about his removal from the prefect gathering by Delfi, P. Urbšys responded that this way the group has "freed him from the need to get up earlier."

"On the other hand, I would not want it to be the sign of the group becoming hostage to one person. The group prefect's dissatisfaction with me first began when I made a clear statement regarding Greta Kildišienė, proposing to not mix personal affairs with state matters and secondly when the initiative on the commission on agricultural affairs was proposed, when I stated that if we are drawing others into the light, perhaps we too should step into it," he said.

According to P. Urbšys, he remains in the group because he wishes to safeguard it from "wrongful decisions in regard to questions of land and fertilisers."

When inquired about the STT investigation in Panevėžys, P. Urbšys said at the time that the "STT is politicking."

According to the institution, during the analysis, corruption risks were uncovered.

"Public procurement principles were breached, the right of economic entities to fairly compete in public procurement tenders was limited, the prestige of municipal controlled companies was decreased. Through such actions, a system of abuse and disregard for the law has been created," STT Panevėžys office head Žydrūnas Krampalcas specified.

Seimas’ secret: what is the Kubilius commission actually for?