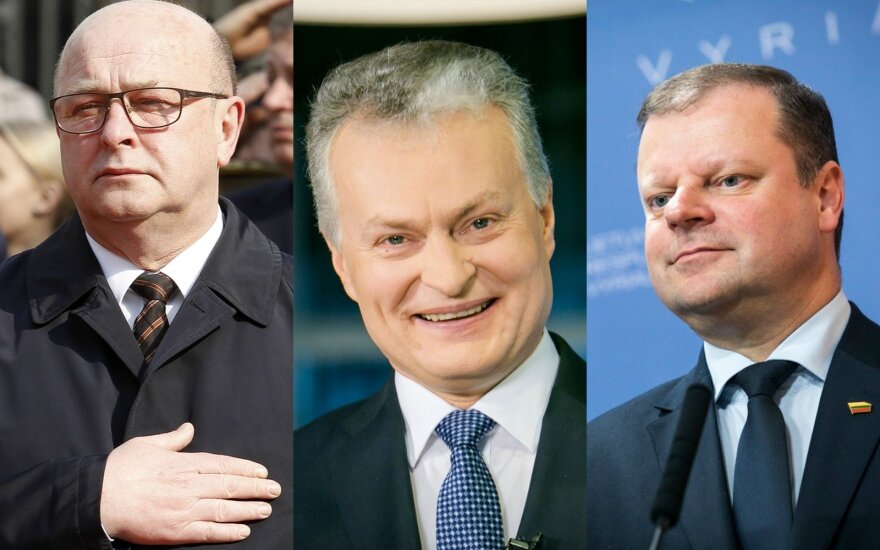 Current surveys on the presidential elections will likely have little to do with the final results, sociologists Rasa Ališauskienė and Vladas Gaidys tell LRT.lt. Political scientist Jūratė Novagrockienė also claims that the current ratings of Prime Minister Saulius Skvernelis assures him of nothing: "It doesn't have to be the one with the highest ratings who wins. Many people are still undecided, furthermore an unexpected candidate may appear and defeat everyone."

The September 8-17 survey by Vilmorus shows that if the presidential elections were held right now, most support would go to Prime Minister S. Skvernelis (15.6%). In second place is Kaunas Mayor Visvaldas Matijošaitis, with 9.3% support. Not far behind is the advisor to the SEB bank president Gitanas Nausėda (8.5%), next is MEP Vilija Blinkevičiūtė (7.1%)

Meanwhile a survey commissioned by the Delfi news portal from the company Spinter Tyrimai on 19-28 September shows that S. Skvernelis would receive support from 13.5% of respondents, G. Nausėda – from 9.9% and V. Matijošaitis - from 9% of respondents. Following this top three, there is European Union ambassador to Russia Vygaudas Ušackas, who would be supported by 7.5% of respondents, Ramūnas Karbauskis, the head of the Lithuanian Farmer and Greens Union (LVŽS) with the support of 7.2% of respondents and V. Blinkevičiūtė – with 6.2% support.

The head of cabinet S. Skvernelis himself has stated that he has already made up his mind whether he will participate in the May 2019 presidential elections, but has not revealed what he decided. This week, talking of the upcoming presidential elections once again, the prime minister stated that the LVŽS will have a presidential candidate, but did not reveal if it will be a partisan or non-partisan candidate. "The prime minister's position is also one I never thought I may occupy. This work is certainly hard, requires much responsibility, but is also interesting. Very interesting. This is why I am currently positioned here, what comes next, time will tell," S. Skvernelis told LRT Television.

Meanwhile sociologists and political scientists say that the aforementioned surveys and numbers are only a starting point for now and will likely have little in common with the final results of the 2019 presidential elections.

V. Gaidys: the runners are not yet at the starting line

Chaos – this can be said about the results of the newest presidential election surveys. According to the head of the company Vilmorus, sociologist V. Gaidys, when asked who of current Lithuanian public figures could aim for the post of president, respondents pointed out an entire 59 names.

"The start hasn't been announced, so far the runners are not yet at the starting line. People have named 59 names, there's a wide variety. S. Skvernelis receives 15.6% of the vote in the list. This is not a large amount, while he is on television almost every day. Overall he was at his zenith a year ago. His ratings have been declining for half a year and have stabilised now, but are not rising. Furthermore he definitely is not in the most convenient position – he is accountable for everything that goes wrong. Kaunas Mayor V. Matijošaitis is not far behind S. Skvernelis, with support from 9.3% of voters," the sociologist analysed the results.

While there are many names being mentioned, according to the executive director of the company Baltijos Tyrimai, sociologist Rasa Ališauskienė, voters lack options – people currently do not know who is actually preparing to run for president.

"Because of this the voters are pointing to whoever is most talked about. Why is S. Skvernelis first? Because he has been mentioned as a candidate for some time now. If people saw who parties are supporting or who is going independently, the results would differ. For now this is only preliminary numbers, a starting point, but this will likely have little to do with the final results," R. Ališauskienė commented for LRT.lt.

According to the sociologist such a distribution of votes as is currently shows that there is no clear political leader: "There is no-one who would fit the [presidential] archetype. S. Skvernelis and V. Matijošaitis who are being talked about are more farmer type people, representatives of executive government, while at least in the public sphere there is no clear political leader, who also knows foreign policy well, to be seen."

Political scientists: someone we do not even know of yet could win

The head of the General Jonas Žemaitis Lithuanian Military Academy Department of Political Science J. Novagrockienė and Vilnius University Institute of International Relations and Political science lecturer Mažvydas Jastramskis say that a candidate the public is not even familiar with yet could win in the presidential elections. According to them, potential in other sectors needs to be considered, who is currently working in foreign institutions and such.

"Often an unexpected candidate who can win appears. This could be the case now. They could defeat everyone. Furthermore the survey leader S. Skvernelis has also not declared he will participate. Much is also decided by electoral campaign organisation and how undecided voters will vote. They can be decisive in a different candidate winning. It does not have to be the one with the highest ratings that wins. I do not believe that S. Skvernelis' ratings are assured," J. Novagrockienė told LRT.lt.

Political scientist M. Jastramskis believes that the number of undecided voters in the Lithuanian public is very large. "In the presidential elections, which are very much based on personalities, the voters' decisions can be decided by very short term factors. [...] Speaking of these surveys, it could happen that one of the top five will win, but someone who does not yet know they will run could also win. I believe that with half a year left, one needs to have ratings of at least 5-6%, it must be clear half a year ahead of the elections that the person can participate in the elections. Otherwise it can be difficult, effort will have to be made," the political scientist said.

R. Ališauskienė concurs with this, stating that candidates will find it difficult to move ahead without 6-7% of the vote. "In principle one can win the elections from zero in half a year, but then there is need for an excellent and very active campaign. Albeit there are now many limitations, it is currently harder to run for president than in the time of Rolandas Paksas," the sociologist added.

M. Jastramskis guesses that most candidates will announce their candidacies with half a year left to the elections. The political scientist believes that within parties there will also be struggles who to raise as candidate to president. "It will certainly not be the case that with half a year up to the elections, we will know who the parties will support. Overall the question stands whether they will raise their own candidates. 1997 was the last year when the Conservatives supported their own candidate," the TSPMI lecturer reminded.

He notes that the current list of names is definitely long and those who have around 3% of the vote can easily be surpassed by others. "The ratings currently lack names such as Aušra Maldeikienė, whose potential is hard to measure. [...] I would not go ahead and guarantee that these names are the ones we will see in the race. There are no clear leaders, there is no-one who currently has support from 20% of voters. As such there can definitely be many who seek to participate," M. Jastramskis stated.

According to the political scientist, there is no single factor which will prove decisive for the elections. "Everything will depend on political processes, government work, how party popularity fluctuates, who will appear to be competitive candidates. There are many variables and everything could be decided by the details. While I am interested in the elections, I currently have no idea who will win them," the TSPMI lecturer told LRT.lt.

Sociologist V. Gaidys agrees that accidental mistakes at the finish stretch could be decisive.

"There were elections where a candidate caught the flu and it was difficult to appear on television. This happened between two rounds and had a massive impact. Earlier presidential elections were very clear, the winner was decided from the start – Dalia Grybauskaitė had strong appearances during both election rounds. Meanwhile the other candidates acted passively, as if everything was decided already. Even the journalists had little interest in the other candidates, half a year up to the elections it was eerie silent. Meanwhile now there is talk about the elections and candidates on radio well ahead of time. This time we have a completely different situation, there are numerous candidates and no single one is dominant. This will be an interesting election," V. Gaidys promises.

Lithuania's political parties lost 6,386 members since last October, although tendencies over the past...

V. Matijošaitis to defer deciding on participating in the presidential elections until only a few months remain

Scenarios for how S. Skvernelis may act