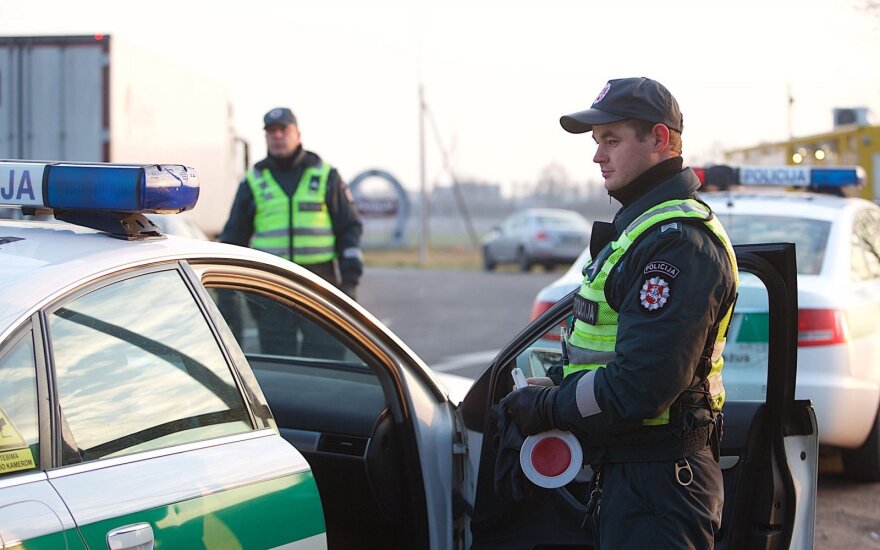 With the heads of the Interior Ministry and Police Department boasting that the police reform initiated several years ago has met expectations, representatives of police labour unions point to issues in the reform, Lietuvos Žinios writes.

The union representatives point out the declining quality of pre-trial investigations and state that certain crimes are not being investigated at all, just formally recorded. Apparently, only crimes, which reach the public sphere and news media, receive more attention, while the rest are sometimes just left to their own devices and with this, public security is on the decline.

The leadership of the Interior Ministry (VRM) and Police Department (PD) retorts that officers' wages have risen almost twofold over two years of reform, officers' equipment has improved, reports are reacted to more rapidly.

No lack of problems

According to the head of the Lithuanian Police Labour Union Roma Katinienė, police officers are not opposed to reform, have offered proposals of their own, how to improve police work, however there are glaring flaws in the colossal reform package.

"One of the goals was to reduce the number of police officers. This succeeded, however not overly fairly because the largest decline in officers was in the regions, rather than district centres. With the reduction of officer numbers, public security has not improved and the remaining officers' workloads have increased. Investigators are each responsible for up to 50 preliminary investigations each in the large cities," R. Katinienė said. According to her, with the removal of criminal intelligence departments in police stations, there is no one left to collect information about crime-prone groups, no steps are taken to break them apart. This way, the prospect for increased crime rates opens up.

The police union representative explains that the universal police officer model has not met expectations either and with the removal of the precinct and juvenile affairs inspector posts, there is no one left for preventative work, which has led to a rise in juvenile crime. With the reduced number of police officers and moving jobs into vehicles, the security of officers themselves is no longer adequately ensured. "Many of the problems were identified at the onset of the reforms, but they are not being resolved thus far," R. Katinienė explained. She observed that resolutions to the problems and sometimes even investigations are initiated when the news media takes interest or it reaches the public's ears.

Vilnius District Pre-trial Investigation Institution Union chairman Vitalijus Jagminas also pointed out the numerous business trips of the PD's leadership and the funding for it. According to the union leader, members of the senior police leadership take several tens of business trips a year during which they receive tens of thousands of euro in expenses. Meanwhile equipment for regular officers, he states, remains poor. "There are public demonstrations of purchased new vehicles, but if you open the trunk of a police car, you will only find an axe, well perhaps something more like a rope and shovel. These are what we are left to work with. As for, for example, the promised bulletproof vests, those have still not been made available," V. Jagminas said.

Police Commissioner General Linas Pernavas is far more optimistic regarding police reform and police results last year. According to him, over three years of reform, some 90% of goals have been reached. Last year was also successful in implementation: the number of police crews has risen from 200 in 2016, to 350. In addition, response times are more rapid (response times to category A events have improved by 30 seconds), more attention is dedicated to violent crimes. Apparently, officer equipment has improved as well – they have been receiving new vehicles, new uniforms, other equipment, their wages have been rising.

Drawing in specialists to work on the police force is also no longer an issue. Several years ago, police work was unappealing – a rookie officer would receive 375 euro after tax and drove a rickety vehicle. Now, with wage increases and new vehicle procurement, the situation has changed. "Several years ago we would only receive one applicant to five job positions, while today we have five applying for one job – this has not occurred in Lithuanian police history," L. Pernavas emphasised.

According to a VRM press release, Interior Minister Eimutis Misiūnas also emphasised that the police system reform is "one of the few systemic reforms, which have been implemented to good effect." Apparently over the past two years, officers' wages have near doubled, their equipment improved and reaction times are more rapid. "I view the reform as successful, currently other statutory services are going down the same path. And it is only those who do nothing, who don't make mistakes. The positive results of the reform are evident, however we also see remaining risks," E. Misiūnas mentioned.

The minister stated that the reduction in officer numbers without an increase in work efficiency is concerning. Workloads for officers are rising, which leads to potentially reduced work quality. Since the number of officers on the streets has risen fifty percent, events are responded to more rapidly, however E. Misiūnas admitted that it is not as fast as was expected.

Based on information of the Integrated Penal Process Information System provided by the Prosecutor General's Office, the amount of cases where prosecutors ruled to not continue preliminary investigations has increased. In 2016, the number of such cases amounted to 1.1% of all cases, while last year it was 4.1% of all cases. According to the minister, "The unbalanced pursuit of simplification in process actions and the regulation of their control based on internal legal acts retains the risk of not registering criminal activities or qualifying them as administrative breaches."

"Last year saw a decrease in theft rates of 25%. The question arises, what this number means. Do people not believe that the officers will investigate the theft and thus do not contact them or is it an actual notable decline in crime rates, which should be boasted of. If it is the former, the threat of a feeling of invulnerability rising exists," E. Misiūnas noted.

Seimas Legal Affairs Committee (TTK) chair Agnė Širinskienė of the "Farmers" stated that apparently not all officer unions are critical of the police reform. "I believe that the ongoing police reform is successful," she assured. According to the MP, all the reforms are linked with work optimisation and the police reform is no exception. As such, the number of officers has declined significantly and this allowed large savings, which led to increased wages to the remaining officers as well as better equipment.

TTK member, deputy prefect of the Lithuanian Social Democrat Party Seimas group Julius Sabatauskas admitted to Lietuvos Žinios that the PD's plans are truly ambitious. It is planned that in 2020, the lowest wage for an officer would be a thousand euro, officers would be better equipped, better working conditions would improve, all the while public security would also increase.

"The intention is to achieve this with internal resources, however it cannot be done ad infinitum. We cannot allow the number of officers to decline to such a level that there's no one left to work. Pay raises for officers is a good thing, however it is bad when it is done without considering work results, but instead a contrivance is done – adding bonuses to everyone's wages. In such an environment, experienced officers are not motivated to work well. A clear and motivating payment system should be established," the MP emphasised.