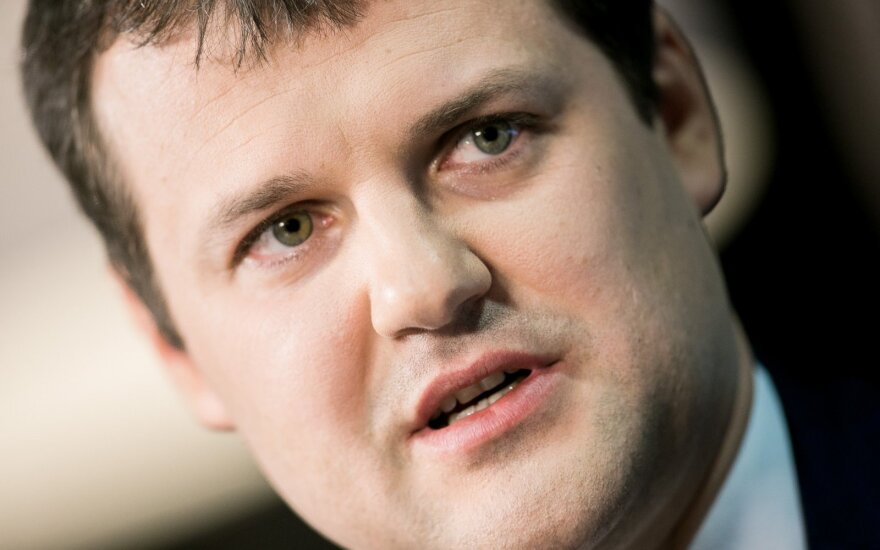 The newly elected social democrat leader Gintautas Paluckas on Saturday presented his conditions, according to which he would like to continue working with Farmer and greens Union, which is a partner in the coalition.

Firstly, Farmers’ should take over some of the priorities of Social Democrats, which are suggested for the Government’s program and plan. Secondly, G. Paluckas wants to establish a clearer communication between partners of the coalition: to make the meetings more formal, establish that they would take place constantly, and not only when someone is displeased.

G. Paluckas, on Saturday was elected as the new leader of Social Democrats but will take office only on 6th of May.

On Monday, a meeting with the Prime Minister Saulius Skvernelis iwas planned, and on Monday, G. Paluckas answered journalist questions.

Mr. Paluckas, how are you feeling?

I am feeling good. Truthfully, a little tired because the election campaign was extremely intense in every sense but I am happy to have won. I do understand that I have a big responsibility to implement the changes that I have promised during the campaign, in order for the Social democrats to get back their name as a left party and could expect trust from the voters in the future.

What are your promises, could you repeat them?

Firstly, the people who speak on behalf of the Party, will have to change. Both the Board and the Presidium of the party will change. A few principles will be complied with: gender equality, certain responsibilities and accountability with the branches and regions of the party.

Also, social democracy will eventually come back to the agenda of the political party and democracy to the party structures. Here are the main things that I talked about during the campaign and have received basic support on.

Prime Minister S. Skvernelis said that the farmers will not review the coalition agreement. Does this mean that you will retreat from the coalition?

On Monday I will speak with the Prime Minister, we will look at the range of questions: not only the coalition agreement, which is important, but also our, the Social Democrats, political priorities in the coalition and simply communication. Despite the fact that we are small in the coalition, we would like an equal relationship and decision-making when considering projects. And we should not run after them and comment publicly where there is no rational basis and on what the coalition is not yet agreed on.

What are the specific terms and conditions, which will be given to the Social Democrats, so the party would remain in the ruling coalition?

There are two conditions: our, as Social Democrats, the political priorities in the Government agenda, program and action plan. Second, the relationship and communication format. This must be continued: coalition meetings, management meetings, rather than occasional, when the tensions are too large when seeps into publicity. There is a need to normalize relations, to adapt some of the priorities of Social Democratic policy into the Government program, action plan and everything will be fine.

Which actions of the term were incorrect or false?

The farmers did not do so much that they could be called false, because there was just so little that was done. But with regard to the reform of the education system, educational institutions network restructuring, the question whether to lengthen the school year or not, is not a good thing. In the opinion of Social Democrats, we need to address wage issues, staff payment issues, and etc. In fact, both we and Farmers Green talked about it during the election. We would like these things to begin. The lengthening of the school year? That is fine but it's not really a priority.

When will you meet with Ramūnas Karbauskis?

I will meet with S. Skvernelis on Monday, and with R. Karbauskis we will not meet yet, but hopefully in the near future.

Are you feeling positive in terms of the preservation of the coalition?

I am a positive person in general, but if today we conducted a referendum inside our party after the election campaign, I can clearly say that probably we would leave the coalition because we are not satisfied neither with the position nor with those decisions, that we are not able to influence in the coalition. It will be necessary for both sides to try for this coalition would be productive.

The reform of the Social Democrats on forest enterprises is looking through another prism - through the prism of regional policy. We won’t support those reforms, which destroy jobs in the regions. Any optimization, efficiency improvement, stopping theft and similar things for us are acceptable but if centralizing everything in Vilnius jobs in the regions will be reduced, that is not acceptable for us.

Are you willing to redistribute ministerial portfolios?

Portfolios are already distributed, no one keeps them on the counter, there is nothing to distribute.
What are you going to do with the Labour Code, just before the election you expressed a different position than the majority.

For the Labour Code there will not be a lack of tensions because we are, after all, the authors of the political project, the authorship is a little depressing: both as a party and as a group. Before commenting more I really want to talk to the group. My personal opinion on the Code is that we would really, really need to think about an agreement with the trade unions and to have a common position. Today we can see the preparation, a code that is taken into pieces: a part that is acceptable, the Tripartite Council approved them but it should be considered in complex. Therefore, the group will want to talk on the position.

How will you cooperate with the group, keeping in mind that you're not a member of the Parliament?

Very simply: I will come to the meetings and we will communicate and collaborate.

Who will provide you with a pass to the Seimas?

There is no problem. Political party leaders have the privilege to request permission to the Parliament from the Chancellor of the Parliament. You do not have to ask one of the groups of the permit to the Parliament. Otherwise I think it's one of my strengths that I am not a member of the group and I can see those things very clearly through the prism of the party representatives, I will communicate with the party, because the group is rising from the Party, not the Party from the group.

Are you satisfied with the current Social Democratic Ministers?

I am satisfied with their activities until they will not satisfy me. I can say frankly: Yes, I would like to make our justice Minister talk a little more seriously about human rights. I will need a little help to understand the Social Democratic Minister's policy on the matter. I will not comment on other Minister activities. Linas Linkevičius works really well, and Mindaugas has just completed the election campaign, I think it would be unethical for me to evaluate his work, because I could be accused of subjectivity.

Is there a place as your right hand for M. Sinkevičius, or will he be offered the post of a Deputy?

At the Social Democrats, the position on the left rather than the right is more appreciated. In fact, I will keep two principles when forming the team: six deputies - men, six - women and all future deputies will have to get delegation letters from the department, and from the regions in order to create mutual trust, accountability, responsibility and communication. Given the tremendous support Mindaugas has in Kaunas region, I think that Kaunas will support him.

The same question is about Algirdas Butkevičius?

A. Butkevičius will be a board member, because all former chairmen are board members. His experience and institutional memory will not disappear.

Does the fact that between you and M. Sinkevičius was a small difference, increase the risk that a party may split?

No, there is no such risk, the Social Democrats have that trait: we can discuss sharply, fight sharply but at the end of all the fighting, things will calm down because we are well aware of the future struggle or competition will not harm me personally, but the whole party.

Do you think it possible that M. Sinkevičius was harmed by the fact that the former candidates for party chairman supported him specifically? They stressed the fact that you were convicted.
I do not know who harmed or helped but the election campaign itself was not very nice, it was very intense. There was a lot of activism, which, to say the least, is at odds with reality. I think it has consolidated the ranks of my sponsors. I do not know whether this was detrimental to Mindaugas but the support after such intense agitation only grew for me.

The support of Gabrielius Landsbergis helped or harmed you?

You know, I cannot prevent Gabrielius’ support that was spread through Facebook, he is a free man. But his support has caused great discontent in Social Democratic ranks as Social Democrats certainly will never allow the Conservatives to elect a chairman for them.

Can you identify the specific people, who should change in the leadership?

I really do not want to name anyone because, as I said, I will consult with the divisions, departments can recommend someone one or the other person, where I might not see a big advantage but this is a democracy and we decide together.

However, I see two people from the older generation, who have special qualities, and would like to see them in the team. Gediminas Kirkilas because of his strategic thinking, institutional memory, and for a variety of wide-ranging skills, and then Vilija Blinkevičiūtė for her public support for the Social Democratic position and other things.

How long have you been a member of the Young Conservative League, and how did this happen?

I was a member of the League of Young Conservatives for three months of 2001. It happened very simply: as all people, who are studying and trying to find themselves, to participate in activities. I really liked the Young Conservative League activities at the time, they were very active but eventually the values differed because I am a Social Democrat.

M. Sinkevičius says that second place is not a defeat for him. He considered that G. Paluckas arguments were simply more convincing for the party members.

Skvernelis thinking about a “rainbow”?