Two candidates forging ahead in the race for Grybauskaitė‘s post 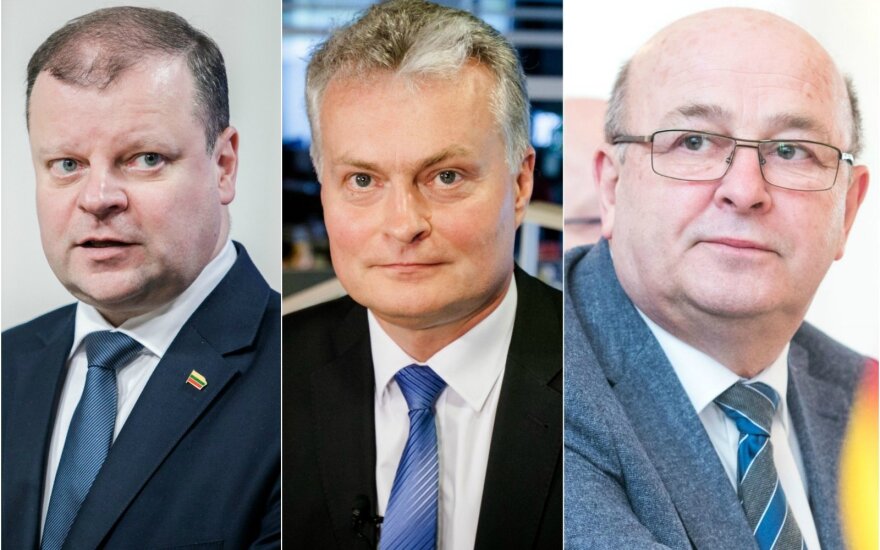 Voters looking around for Dalia Grybauskaitė's successor in the post of president so far sympathise with candidates who are similar to here, noted for their technocrat image. Nevertheless, certain party candidates could still turn the situation upside down.

According to a public opinion and market research company Spinter Tyrimai survey conducted on commission by the news portal Delfi in November 16-24, 2017, if the presidential elections were to be held this coming Sunday, there would be a close showdown between Prime Minister Saulius Skvernelis and economist Gitanas Nausėda, with the two being separated by only 0.2%.

S. Skvernelis would receive the support of 12.2% of respondents, while G. Nausėda – 12%. Kaunas Mayor Visvaldas Matijošaitis would take third place with support from 9.5% of respondents.

Summarising the results, political scientist, Lithuanian Military Academy professor Juratė Novagrockienė concluded on a visible trend – voters would prefer a technocrat president. According to the political scientist both G. Nausėda and S. Skvernelis are viewed as executives with expertise in their areas.

"Their situations are rather different because S. Skvernelis receives many political points for being the prime minister, being very visible. Meanwhile G. Nausėda would appear to have gathered his political capital because he has been providing neutral, respectable and detailed commentary on the economic and sometimes political situation. Both have formed the image of an expert individual," J. Novagrockienė said.

According to the political scientist, perhaps voters are inspired by the example of the current head of state – she takes interest in state economic affairs, domestic issues.

"Compared with Valdas Adamkus, it is a completely different style of leadership because V. Adamkus was more interested in the creation of a cultural, general image, trying to coordinate the interactions of the various political parties," J. Novagrockienė said.

V. Matijošaitis who is lagging behind the leaders a little is also characterised as being good at setting things in order, knowing how to care for Kaunas, according to the political scientist.

According to J. Novagrockienė, MEP Vilija Blinkevičiūtė, who is in fourth place with 7% support, remains highly rated due to political inertia. She crafted her image during her tenure as minister of social security and labour, did not appear in any scandals over the time, thus her ratings remain high.

The political scientist highlighted that all these candidates are linked because they are fairly well known, however currently fairly low profile. Nevertheless, J. Novagrockienė notes that there is still much time to the 2019 elections, thus is still early to make conclusions based on current surveys.

Mykolas Romeris University docent Virgis Valentinavičius stated that the line-up of ratings leaders may appear completely differently when the parties present their candidates because the support for the current leaders is not high, reaching only around 12% at most.

"When we combine the votes of I. Šimonytė, V. Ušackas and Ž. Pavilionis, we see that when the Conservative Party candidate for the presidential elections appears, they will already have more support than S. Skvernelis. We will see a consolidation of votes in the future. There will be strong Conservative and Social Democrat candidates and keeping in mind that the portion of negative evaluations for S. Skvernelis is rising in the ratings, his chances to perform in the presidential elections are modest and increasingly so with every passing day," V. Valentinavičius said.

The political scientist pointed out that G. Nausėda and V. Matijošaitis who can be found among the current ratings top 3 are notable for one common trait – they are linked with major business. The first is linked to the banking sector, while the second has his own multi-million euro business.

V. Valentinavičius was uninclined to view prospects for Lithuania being governed by a businessman positively.

"In my personal opinion, the last thing Lithuania needs is a businessman in the post of president. Businesses already have vast influence on policy in Lithuania, the number one priority of a string of cabinets has been to improve business conditions over the welfare of the people, thus if we also have a businessman president, in this respect the situation will turn truly catastrophic," he said.

The presidential election context frequently is accompanied a discussion of the two Lithuanias – the wealthier residents of Vilnius and other major cities and the remainder, who struggle to make ends meet. According to the political scientist S. Skvernelis and V. Matijošaitis are more candidates of the second Lithuania, while G. Nausėda is very clearly one of the first Lithuania.

The public opinion and market research company Spinter Tyrimai held a public opinion survey on commission by the Delfi news portal on November 16-24, 2017. Citizens aged 18-75 participated. The survey was held as a standardised interview.

The research was performed across Lithuania, at 65 selection points distributed to represent the territory of the whole state. 1005 respondents were interviewed during the research. The distribution of research participants is proportionate to the number of citizens in the country's regions. The research error margin is 3.1%.

Lithuania's President Dalia Grybauskaitė remains the most favoured politician of the country,...