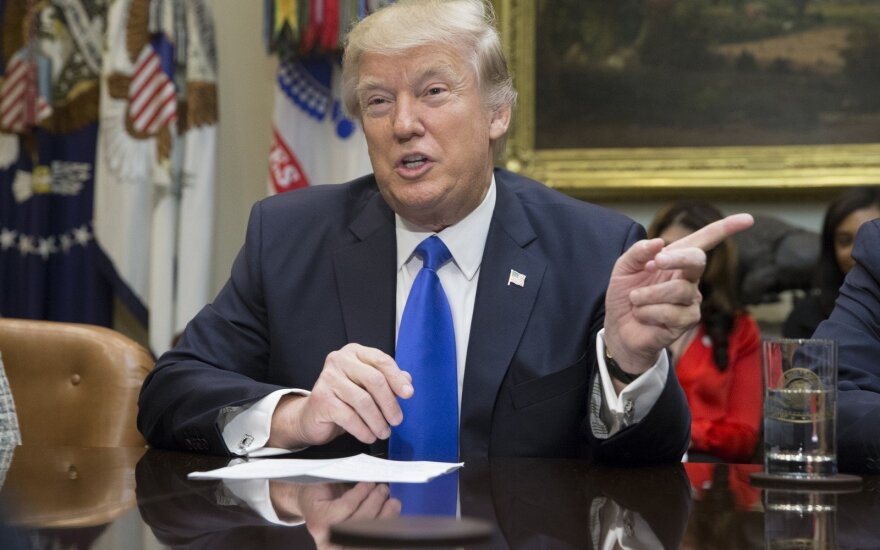 If the transatlantic US-EU train continues to steam ahead in its current direction, it risks falling into the abyss, the head of the Vytautas Magnus University (VDU) faculty of Political Science and Diplomacy department of Regional studies Sima Rakutienė told LRT Radio. According to Vilnius University professor Tomas Janeliūnas if some of US President Donald Trump’s plans come to fruition, for example states being made to take care of their security individually, it would cause threats in Europe, LRT.lt reported.

European states are unaccustomed to independently maintaining their own security

With a few days left to the highest level meeting of European Union leaders in Malta, Donald Tusk has released a public letter. In it he discusses the main threats facing the Union. Writing on external threats, the head of the European Council mentioned several: a stubborn China, Russian aggression on Ukraine, the wars and terror in the Middle East and Africa. However the media’s attention was most caught by the lines that identify the new US president’s claims as equally threatening.

Related articles
Grybauskaitė; EU must rely more on itself amid Trump's 'unconventional diplomacy'
Vilpišauskas. Can the EU survive without US support?

According to S. Rakutienė a number of Donald Trump’s statements and actions have left European politicians concerned.

“D. Trump praised Brexit, the United Kingdom’s choice to withdraw from the EU. He even urged other countries to follow the example and regain the identity. The Europeans were hoping that the claims made by Donald Trump during his campaign and even his positional fluctuations would cease on becoming president. Now we see that his attitude has remained and unfortunately it is destructive toward mutual relations,” S. Rakutienė said.

According to her, currently Trump sees the EU as simply a development tool for Germany, adding that “After EU leaders strongly condemned his decision to ban arrivals from seven of the largest Muslim countries, D. Trump immediately responded by criticising the euro. Meanwhile the euro is actually held to be one of the most important achievements of the EU.”

Another concerning claim by D. Trump is about NATO. Vilnius University Institute of International Relations and Political Science (VU TSPMI) professor Tomas Janeliūnas stresses that Trump’s thoughts about NATO could be the most disconcerting.

“D. Trump believes that NATO is outdated as a security organisation, that the states themselves should take greater responsibility for their own security (speaking of specifically European states). If this would mean a US withdrawal from NATO affairs, it would no doubt be a great shock to both us and all other European countries,” Janeliūnas explained.

According to him no European country is truly used to maintaining its security independently, noting that “We have to admit that in essence no [EU] country (not even the larger EU states) is used to taking care of its own security affairs separately, individually. In this case the US often took leadership in resolving international problems, initiating sanctions or military action, interventions, when it saw fit.”

According to the expert an attempt to create a security environment where the Americans no longer play the main role would truly be painful. “This would grant an opportunity for other states to raise challenges and establish increased power. Of course we are primarily thinking about Russia who could use such a situation, such ambiguity, perhaps a transition period, when they would feel that the Americans are unwilling to radically react to any outbreaks of aggression from the East. Of course all of this raises the risk of increased instability in Europe,” Janeliūnas said.

The head of the European Council, D. Tusk wrote of the seven decades of consistent US policy toward Europe. Tusk is concerned regarding potential shifts in this policy, with its starting point being the Marshall Plan presented in 1947.

T. Janeliūnas reminds that the USA got involved in ensuring European security specifically after World War II, offering specific institutions and measures to strengthen cooperation. According to Janeliūnas this cooperation encompassed everything from economics, the reconstruction of post-war Europe to ensuring security, when the greatest threat was posed by the Soviet Union.

“Over seven decades both the institutions and the practice formed into a partnership where the USA was the leading partner in primarily security. With natural economic expansion the EU and US became the largest trade partners in the world in terms of mutual trade flows. It is natural that together these two partners began to form an idea, ideological and moral policy which set the basic rules for the functioning of the entire international system,” the expert explains.

He adds that if the new US president chose to withdraw from such cooperation and such partnership, naturally it would not be just bilateral relations that would fall apart. “The whole international system changes because the whole perception of who the main foundations controlling the international system are changes,” Janeliūnas said.

According to VDU department of Political Science and Diplomacy lecturer S. Rakutienė currently US-EU relations are undergoing fundamental change, explaining that “We can view this as a significant shift in transatlantic relations and, as for example analyst Uri Friedman stressed on theatlantic.com, that one of the EU leaders identified the US presidential administration as one of the core external threats to the EU shows a fundamental change in global politics because so far the transatlantic relations were based on strategic partnership.

Rakutienė highlights that D. Tusk stressed in his letter itself that we are seeing a shift in US foreign policy. “What the USA did for 70 years and what it pursued in foreign policy, that’s how it could be erased. This is a warning message, a strong signal,” she notes.

Following D. Tusk’s letter on the new US administration, the Lithuanian President and Minister of Foreign Affairs have yet to comment. According to T. Janeliūnas, we first need to realise toward where D. Trump’s policy leads.

“The position of Lithuania may perhaps not have a big influence in this case because some sort of emotional expressions would definitely not make for improved Lithuanian-US relations. Currently it is overall more important to realise where current US presidential policy leads, what negative consequences we may face due to it and how we can prepare for it,” Janeliūnas said.

One of the most important tasks according to the expert is to attempt to convince the Trump administration that neither NATO, nor the EU have outlived their use and that maintaining European-US partnership is crucial in order to maintain global order and stability. “Such positive actions which invite greater cooperation would be far more beneficial,” Janeliūnas stated.

S. Rakutienė notes that while D. Tusk’s letter identifies the US administration as a threat, the letter concludes with an accent that the Americans are nevertheless our friends.

“D. Tusk is simply warning that without a strong hand global peace and order cannot continue. To paraphrase we can claim that if the transatlantic train continues on this track, it could fall into the abyss. I still believe that ways and means will still be pursued to communicate with influential US politicians, republicans, perhaps the Congress and to truly pursue ways to change current tensions which are now not only tension, but in fact a critical state,” Rakutienė stressed.

D. Tusk finished his letter with a phrase often used by Americans – “Strength in Unity”. It would appear that European politicians are waiting with concern to see if the new US president will adhere to this motto.

To note, during the recent meeting of US and UK leaders the two responded positively on bilateral relations.

The European Union should rely more on itself in the face of US President Donald Trump 's...