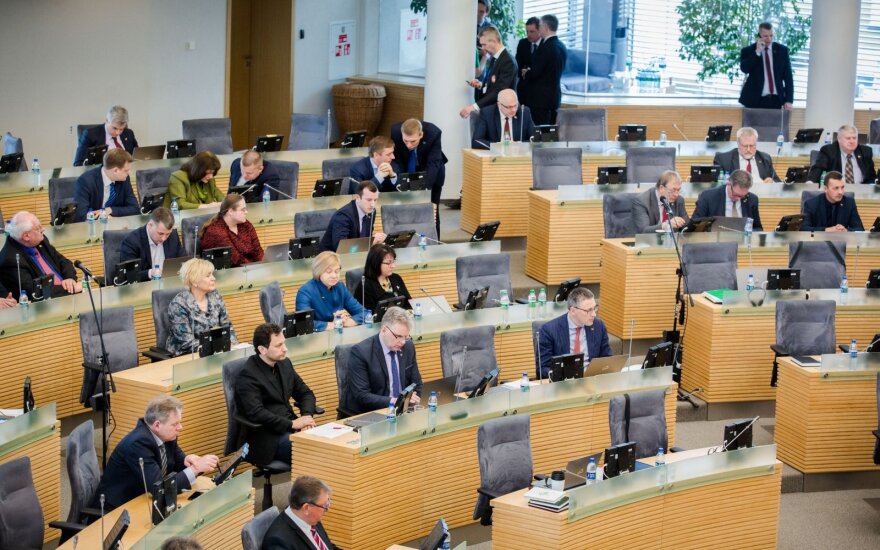 Lithuanian citizens are usually asked, who they would vote for if the elections would take place in the near future. However, when they're asked the opposite, which party has no chance and what people have the worst "allergy" to.

Ainė Ramonaitė, professor at Vilnius University Institute of International Relations and Political Science, is the head of Lithuanian national election studies project where the political behaviour of Lithuanian population is studied.

Because of this, after the Parliamentary elections scientists ordered post-election public opinion survey, which was carried out by „Baltijos tyrimai" in 2016 November 11-December 10.

Related articles
It‘s dropping fast: it has been worse only for the Conservatives
Poll: Kaunas Mayor Matijošaitis' popularity is on the rise

The study, among other questions, an interest was shown, how likely is it that the person being questioned would vote for one party or another. If it's very likely, a person marks 10, if not at all likely, the he marks 0.

In this way it's possible to identify the potential and ceiling of the parties.

According to the survey, 36.2 per cent of respondents said that their vote for the Lithuanian Poles' Electoral Action - Christian family union would be very unlikely. However, this result isn't surprising because the Lithuanians traditionally are don't usually vote for the party that represents the Polish minority interests.

But it gets more interesting: 28.5 per cent and 26.2 per cent of respondents said that they would never vote for the Labour Party and "Order and Justice".

Of course, it was perfectly illustrated by the Parliamentary elections. They Labour Party suffered a complete loss because only two of its members got into Parliament, and Order and managed to win eight seats with their list in single-member constituencies.

Political scientists A. Ramonaitė states that this phenomenon is unexpected and interesting, especially in the case of the Labour Party because this political force had a well-organized structure, a large number of members but suffered a loss in the elections and became non grata party in Lithuania after the Polish election campaign.

To the question as to why this happened, the professor mentioned the retreat of the former leader, Viktor Uspaskich.

"I think that one of the main reasons is the withdrawal of V. Uspaskich. The party held on his personal charisma and his ability to start the machine as a business machine. Apparently, after his withdrawal the machine stopped operate smoothly" explains A. Ramonaitė.

According to the scientist, it's necessary to take into account the correlation between how people like the party leader and wanting to give them their vote. The survey shows that in here the Labour Party with their leader at the time Valentinas Mazuronis differed from the Liberal Movement with Remigijus Šimašius: the connection between wanting to vote for these two parties and liking their leadership is weak.

In other cases, the correlation between wanting to vote for the party and liking the leadership was fixed, including the Homeland Union-Lithuanian Christian Democrats and their leader Gabrielius Landsbergis.

Also, the Homeland Union-Lithuanian Christian Democrats are usually the second most disliked party after the Lithuanian Polish Election Action but so far, the respondents were asked to evaluate how much they like or dislike a party. This time the question was changed and they were asked about the likelihood that a person will vote for the party. According to A. Ramonaitė, the questions are similar but not identical, so it's impossible to answer if the Conservatives improved their image.

After the Conservative go the Liberal Movement, 12.5 per cent of respondents wouldn't vote and the Social Democrats – it's impossible that 12 per cent would vote for them.

The least negative points got Farmers and Greens Union, only 5.3 per cent. A. Ramonaitė said that the secret key of Farmers in the elections was that they didn't have a negative label or enemies.

When evaluating the results of the survey, Professor A. Ramonaitė said that it was interesting to see how different the Farmer Green and Social democrat voters are, who generally are quite similar.

According to her, the main difference of the party's potential voters is how they assess the state's economic situation, when they were asked whether recently Lithuanian economy has improved a lot, improved, worsened or got worse a lot. People, who thought that economy improved, tended to vote for the Social Democrats and those, who said that the economy got worse, chose Farmers and Greens Union.

When they were asked to evaluate the Social Democrat possibilities to recover if they lost the elections to the Parliament, A. Ramonaitė said that the party still has potential: Social Democrats have a stable electoral base where the importance is not the leader but the party itself. "There is a hint of ideological prejudices" says the professor.

At that time, even though the Liberal Movement is considered neutral, the tendency to see the electorate to evaluate a lot worse. For example, when they were asked whether it's likely to vote for a liberal, more respondents chose to evaluate from 0 to 5.