Dr. Giedrius Česnakas, Faculty of Political Science and Diplomacy Vytautas Magnus University
aA
There are a range of proven tactics that the West could use to destabilise Vladimir Putin's regime in Russia but the question is whether Western countries believe such action would lead to a Russia more favourable to Western interests. 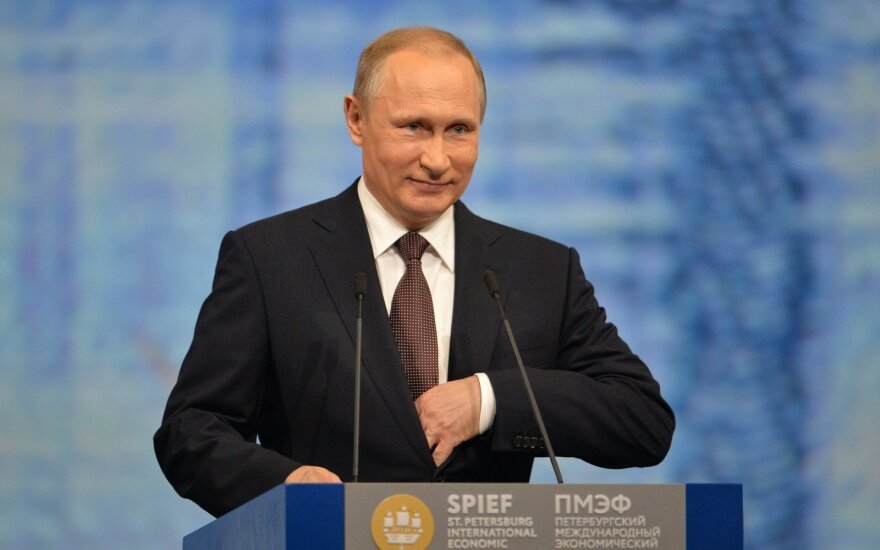 Russia’s annexation of Crimea, support for the fighters in the Eastern Ukraine, and declaration that the United States and its allies seek to “retain their dominance in world affairs” by “containing Russia” while NATO is “creating a threat to national security” (Russia’s National Security Strategy 2015) suggests a return to the past - the Cold War era. The militarization of Russia, the US' growing focus on European security, increasing NATO defense expenses, and the limitation of political and economic contact between the West and Russia only strengthens the Cold War discourse.

However, Russia is not the Soviet Union. According to the Stockholm International Peace Research Institute (SIPRI), Russia’s defense spending is only 11% of the US' spending (in US dollars), while in 1988 it was 86%. Its economy and population has shrunk significantly after the dissolution of the Soviet Union.

The US has been successful at establishing alliances in Europe, Asia and the Middle East, and it is becoming an even more desirable partner around the world. Meanwhile, Russia has no real strategic partners. It leads the unviable Eurasian Economic Union, the CSTO “quasi alliance” members are in favour of very limited participation, and Moscow has already recognized that it cannot exert powerful direct influence on member states of the CIS.

Russia can increase its influence in the international system only by rogue policies. Russia tactics are to create conflicts in the post-Soviet space and then participate in mediation, putting itself on a par with the US and Western European states. The unpredictability of Russia should be referred to as the unpredictability of President Vladimir Putin, who is contributing to increasing instability in the Euro-Atlantic region. This instability could lead to a major clash between the West and Russia, and just one tiny miscalculation is enough for that to happen.

So how can Putin be defeated when he seems to be redefining the security system in Europe?

History would suggest that defeating Putin means defeating Russia, and experiences of the Reagan years can be applied today.

The first strategic goal would be to keep oil prices low. Oil and gas supply an average 50% of Russia’s government revenues. Low oil prices constrain the Kremlin and forcs it to focus on domestic economic issues, as they create social pressure for the government. The government is forced to cut spending, and while it keeps military spending high, spending in other areas decreases. Moscow has to burn through its reserve funds in order to keep government spending at an acceptable level.

To increase revenue, the Kremlin has to make structural adjustments in the economy, modernizing it and expanding other sectors. Moscow has not been able to diversify its economy in the last 25 years and it is unthinkable that it will be able to do so now – and that's not just because the parliamentary and presidential elections (in 2016 and 2018 respectively) are approaching.

The most important element here is that the Kremlin cannot move forward with reforms as they will undermine the interests of the Putin's close circle of loyalists who own or manage major state or private companies or occupy high-ranking political positions in Russia. Putin cannot lose the support of this circle, and the circle cannot lose Putin. The risk of uncertainty is just too high.

Restructuring Russia’s economy would release tensions, but no one knows where they might lead. This closed system can be put under pressure, and decreasing budget revenues puts on pressure. Low oil prices are here to stay because of fracking technologies and the expanding of application of these technologies.

The second strategic goal in dealing with Russia is to keep its military spending high. This will constrain the Kremlin's ability to spend on other sectors and force it continue to cut its budget elsewhere to keep spending on the military. In 2015, Russia spent nearly 14 % of its budget - the highest proportion in its history – on the military.

Moscow is increasing its spending on the military each year in order to showcase its power and it will have to keep that spending high in the future. Increasing social dissatisfaction as a result of resources being directed to the military instead of to domestic issues will force the Kremlin to invest in even more internal security forces, which it did in April 2016 when the National Guard of Russia was created. Increasing NATO spending will not allow Russia to decrease its military spending.

The third element, which can have more of a cumulative rather than a direct impact, is the sanctions imposed by the EU and the US. The sanctions make a direct impact of -1% to -1.5% on Russia’s national GDP. With low oil prices, sanctions can have a cumulative effect on Russia’s economy as it cannot borrow money to refinance its debt from private banks in the EU and the US. Because of the sanctions, Russia also finds it difficult to attract investments and sanctions have increased the capital flight from Russia.

In 2014, capital flight reached more than $151 billion. Sanctions and low oil prices led to a drop in the value of the ruble, which decreased by more than 45%, and the availability of imports of foreign goods also significantly decreased. Russia’s counter-sanctions limited availability of products from Europe as well. If the sanctions were continued, though voices to recall the sanctions in Europe grow louder, they will continue to magnify the impact of low oil prices.

All these elements will push Russia back to a situation where it will face have to cooperate with the West rather than create conflicts and tensions to attract attention. Lower government revenues because of low oil prices, an increasing need for and inability to implement economic restructuring, and high military spending reminiscent of the Soviet Union in the 1980s.

Of course it will take time for change to happen. The main question is whether or not the West wants to defeat Putin and see changes in Russia. The answer is probably no, because the uncertainty is too high.

The first thing is that no one is certain of how long this strategy should be applied for. Russian society has a proven ability to endure suffering and Putin's circle can suffer for even longer as the threat of ending up in jail or even losing their lives is just too high.

The voices of European countries who are most affected by sanctions will become louder in the future if Russia becomes more reserved. The risk of energy supplies being manipulated to many countries is still a reality and Nord Stream II would increase that dependency.

Second of all, putting too much pressure for militarization in Russia can lead to the escalation of frozen conflicts and new regional conflicts. In this way, Russia will try to reinforce its positions abroad while decreasing domestic tensions with military adventures. The outcome of such actions is very unpredictable.

Third, the level of the resulting destabilization of Russia will be difficult to predict. Destabilization can vary from a “palace coup” to a bloody revolution. Obviously, no one wants purges or revolutions in a country with nuclear weapons. The scenarios might range from unpredictable generals or civil wars on the country's borderlands (Chechnya under Ramzan Kadyrov and the North Caucasus would be the perfect places for that) to increased terrorist activities or even nuclear terrorism.

Fourth, no one knows who will come after Putin, and this fear limits actions. The dominant assumption in the West is that a new guy in the Kremlin could be even less predictable than Putin.

Fifth, there is only a slim possibility that a new Russia would become democratic, because the opposition in Russia is just too small and lacks support. History has shown that, sooner or later, everything in Russia’s government returns to a “systema” in which power is abused.

The West will have to be satisfied with Putin because the alternative risks are too great. There are more than enough politicians who think that it is possible to deal with Putin on some issues if they are not related to Eastern Europe or the South Caucasus.

The West is likely to wait for Russia’s decline in the long term, but Putin’s unpredictability will continue to create more issues in the short term.

With the NATO summit in Warsaw coming up in July, the rhetoric in many Western quarters is becoming...

A survey by the Levada Center , an analytical centre based in Moscow , has shown that 34% of...

As things stand now, NATO would be unable to protect the Baltics against a Russian attack, the...

'Sanction extensions not yet confirmed' - Linkevičius

Lithuania’s Minister of Foreign Affairs has dismissed as untrue media reports that the European...