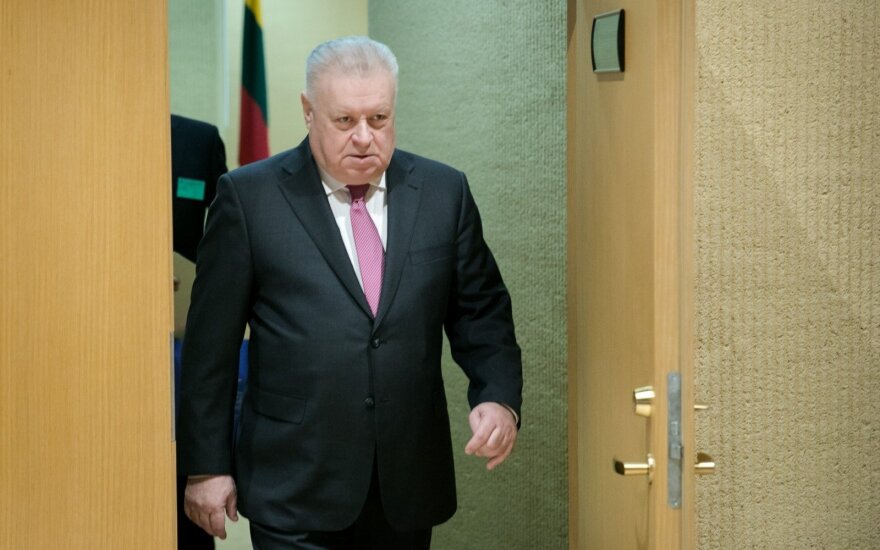 Yesterday Lithuania expelled three Russian diplomats, or rather covert operatives working under the cover of diplomatic service. Last week's statements by the president led to the belief that the number of expelled spies could have been greater, however decisions of this kind are based on objective reasons, according to lzinios.lt.

Traditionally, when a state chooses to expel staff from a foreign diplomatic mission, a number of factors are considered to decide how many foreign operatives are to be expelled and how "loudly" it should be done.

In cases such as the most recent (likely only initiated), the "cleansing" of Russian embassies in various countries is being performed declaratively because it is a response to hostile and aggressive Russian covert operations in the United Kingdom.

In other cases, when for example a spy steps over too many boundaries, they are "silently" asked to leave and the diplomatic conflict is not brought out into public sight.

In deciding how many diplomats should be declared persona non grata, the fact is also considered that an equal number of one's own diplomats will be returned, regardless of them being spies of real diplomats.

Often in such cases the opinions of counter-espionage services are consulted – it is often more beneficial to control the activities of already uncovered spies, rather than uncover new ones, especially if a large number of diplomatic staff is exchanged in one go.

The UK expelled 23 Russian diplomats, the USA – 61. Lithuania appears fairly modest with its expulsion of just 3, however we should not forget that this is just one of the measures being applied by the EU and US against Moscow and the expulsion of diplomats is already a clear demonstration of state views.

Political scientist Vytis Jurkonis tells LŽ that the expulsion of a few Russian diplomats does not mean that the unpleasantness will end for Moscow. "I believe this is not the end. On the other hand, when you look at Germany, France or even Sweden, those 3 do not look so few," Vytis Jurkonis says.

According to the expert, a joke has already spread across social media how "Finland expelled only one because fewer isn't possible," however even this international reaction is a blow to the Kremlin. "I am convinced that the Kremlin did not expect such actions because until now there were only talks and statements, but no actions or just "on paper" ones. It is important to send a signal that this time things will not be "as usual,"" V. Jurkonis said, adding that, "I have no doubt that there are "enlightened" and thus less harmful spies, who are better to monitor, rather than receive new ones and probe, which one is a spy. But either way, I am convinced that this response is not the last and the Kremlin will receive more "gifts."

Political scientist Laurynas Jonavičius told LŽ that it is mistaken to believe that Lithuania has acted overly modestly. This is revealed through comparisons of states expelling Russian diplomats. "The aim was to demonstrate solidarity with the United Kingdom rather than begin some sort of war against spies. This struggle often remains unseen and unheard. Furthermore, considering how many Russian diplomats were expelled by other EU member states, we have "rid" ourselves of relatively many. As such I would not say "only"," he told LŽ.

Defence analyst Audrius Bačiulis also stated on his Facebook profile that the expulsion of 3 diplomats from Lithuania compared to the expulsions done from the USA may lead to the impression that Lithuania remained modest, however he points out that in such a situation one must keep in mind objective circumstances. "Lithuania looks modest with 3 expulsed, but on the other hand if you expel more, we will have to close our embassy in Moscow when Russia expulses an equal number of ours," AUdrius Bačiulis wrote.

Based on the VSD-AOTD report, the Russian intelligence and security services, Foreign Intelligence Service (SVR) and Main Intelligence Directorate (GRU) and Federal Security Service (FSB) are interested in non-public information about Lithuania's positions regarding the EU, NATO and relations with CIS states.

There are also efforts to obtain data about Lithuanian policy makers, domestic policy and relations between state institutions, about party and politicians' views of Russia, businessmen interested in improving relations with Russia.

As a reminder, Russian covert operatives make use of not just typical diplomatic cover, but also operate by other means – as business, news media, academic, delegation and NGO representatives.

The report also reminds that covert operations are performed not just by the services, which traditionally did so. For example the border service, which is subordinate to the FSB, is not just an institution, which as usual in the West, is tasked with border security. It also has its own intelligence agenda in Lithuania. "Against Lithuania, as other EU and NATO states bordering Russia, Russian intelligence services aggressively and actively act from Russian territory. Russian agencies and security services choose targets in their territory from among Lithuanians visiting or working there, businessmen, diplomats, law enforcement and state institution officials, other Lithuanian citizens who have political or business connections," the document states.

Lithuania has decided to expel three Russian diplomats to express its solidarity with Britain over...