Three letters and a solution to five problems 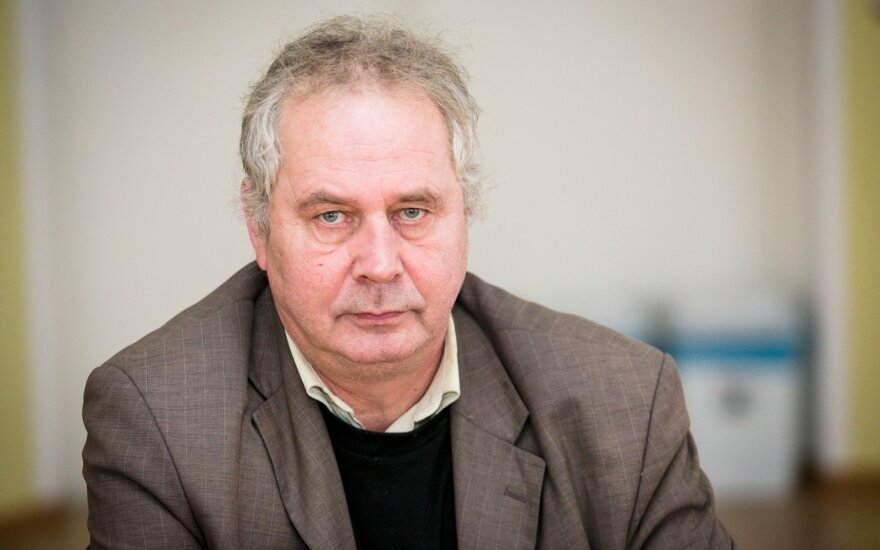 It looks like the current Seimas majority are seriously considering a debate on the problem of the three letters, i.e. w, q and x, in official Lithuanian documents. And it's not just the draft proposal tabled by the parliamentary 3rd of May group, which has garnered the approval of 70 parliamentarians, that proves this.

Another no less important symptom is the commotion from opponents of this law. This issue has long been debated yet what stands out is that in debates, is that this issue is often summed simply as being one big appeasement to Poland or Lithuania's Poles. In my opinion, the three letters are tied to three problems which this year have been troubling Lithuania:

1) They impact directly an ethnic group that has been living in Lithuania for centuries – Lithuania's Poles.

3) The solution to the three letters could be a warming up in relations between Lithuania and Poland. Yet this s issue is however for-

3) Lithuanians who due to marriage have changed their surnames which are spelled with these letters and:

4) This issue is partly linked to the problem of migration from Lithuania.

5) And, most importantly, this issue is linked directly to the future of a Lithuania-scenario election.

Let's take a closer look at this problem

The Polish national minority has a special status in Lithuania. Most of the ancestors of this community have been living in Lithuania for a long time, i.e. unlike the Russians, Tatars, Karaites or Jews they do not have an emigration aspect to them. They can be considered direct descendants of the Grand Duchy of Lithuania who, for various reasons at that time and due to enforced Polonisation at the end of the 18th century and beginning of the 20th century, become members of the ethnic Polish community. History too played its a role. Up to 1939 people living in the Vilnius area were citizens of the Polish state and could not Lithuanianise their surnames as did many people in inter-war Lithuania. Polish-sounding surnames became a part of family history. Today it is simply inappropriate to demand that Lithuanian citizens of Polish origin renounce their family history, a history which has a longer tradition than the Lithuanian state founded in 1990.

Due to their ethnicity, Lithuania's Poles became a focus of competition between Lithuania and Poland. In Lithuania there is understandably anger over the Polish Card however little is being done legislatively to meet the expectations of the ethnic group. Angry that Lithuania's Poles are unduly inclined toward Warsaw, representatives of this minority are being forced by the Lithuanian authorities to turn to the Polish government when faced with solid problems, for example when it comes to education. It can thus be established that Lithuania has not conducted an integration policy within Lithuania, but forcing its citizens to turn their backs on family is polarizing them from Lithuanians and Lithuania. Among Lithuanians, Waldemar Tomaszewski has become a symbol of the "bad Pole" yet it must be acknowledged that this politician has had a talent for accumulating symbolic capital by using the Lithuania's insurance policy.

It's no secret that unresolved national minority problems have become one of the reasons for the deterioration in relations between Lithuania and Poland. Lithuania's Polish factor in relations between the two countries has recently become even more important. If previously in Poland's doctrine of dominating relations with its neighbour was driven by two rails, then in Poland today the issue of the Polish minority has the dominant one. Today, Poland's government is ready to sacrifice good interstate relations for the sake of Poles abroad. That's recently been confirmed in relations between Poland and Ukraine which have clearly deteriorated. This change in Lithuania's politicians shows that up to now they haven't realised. It is plainly sad to read the naïve statements of high up Lithuanian officials after a rare visit to Warsaw, the Polish side has not raised the issue of spelling Polish surnames. It's as if they're signaling Lithuanians that this problem or has been contrived by Lithuanian journalists like Rimvydas Valatka or Virginijus Savukynas. In the meantime open speeches by Polish politicians on this issue are considered tactless or even a diplomatic trick and often put down to the opinion of a specific person.

This situation reflects very well the state of relations between Lithuania and Poland: there is no informal contact while at the same time possibility is lost in the unofficial space for an explanation of the other side's priorities in bi-lateral relations. If the statements of Polish politicians cannot be interpreted in, it would be worth listening carefully to the remarks of Lithuania's friends in Poland. Adam Michnik, chief editor of the newspaper Gazeta Wyborcza and receiver of Lithuania's "Freedom" award constantly emphasizes 10 times the greater Polish responsibility for the state of relations between the two countries and has not once urged the Lithuanian side for a resolution on the issue of spelling surnames.

There is of course no guarantee that the new law will break the ice between Lithuania and Poland. It will however without a doubt lend basis to Lithuania's friends in Poland seeking good relations with Lithuania. Three letters are hardly a high price to pay given the end result.

This is where Audronis Azubalis would really like to take me on urging that we mustn't betray the Latvians. But just hold on! Nobody in Lithuania is urging the legalization of Cyrillic in state documents. It would be better in this case not to follow the example of our Latvian but rather of our Estonian neighbours (and we'd really like to beat them to it) who legalized a similar law on spelling surnames, one which the members of the3rd of May group are proposing.

Finally, it's worth taking a look at the interests of a not-so-small group of Lithuanian women who have changed their surnames due to marrying foreigners. The spelling problem is actually more real for them than the Lithuanian Poles.

It's no secret that this unresolved problem forces more than one member of mixed families like this to turn their back on Lithuania. Quite a few Lithuanian Poles have done the same thing. In this way we're pushing people to leave Lithuania, often losing future skills.

We Lithuanians we need to think long and hard as to why so many world-famous people were born in Lithuania yet are using their skills abroad. As I write this I'm thinking not only of people in the Alma Mater Litvak community but about the Lithuanian Poles like Nobel Prize winner Czeslaw Milosz and others.

By getting angry at our Polish fellow-countrymen we are simply ignoring their contribution to both recent and not so recent Lithuanian history. Indeed, Polish-Lithuanian Dan Pozniak a member of the Lithuanian Polish community was the first Lithuanian Olympic champion; then there's Valdemar Novicki the Olympic champion born in Šalčininkai in 1988. Those are just a few examples that come to mind as I write this article.

I don't doubt that when it comes to the vote the conclusion of the Lithuanian Language Commission will serve as an important basis. In the conclusion, it is recommended that the three letters be legalized for Lithuanians who are married to foreigners. However, haven't the members of this commission overstepped their boundary? It will be remembered that the commission -

Opponents of the three letters most often make their case by repeating that by legalizing w, q and x Lithuanian identity will be destroyed. This is where they miss the time-tested fact of researchers that identity in seeking to keep its vitality must constantly change by adapting to new challenges.

Lithuanian identity was not destroyed at the beginning of the 20th century when the Czech letters š and ž where adopted into the Lithuanian language as was, without much protest, the non-Lithuanian letter h. The introduction of the latter letter according to linguists was associated with popularization of Herodotus and Christ (the name of Christ was at one time written with an h).

The arguments therefore of opponents of the three letters who are scare us with the death of our Lithuanian identity are simply contrived. The clearly have another aim. The debates around the letters in contemporary Lithuania are proof of a clash between two groups.

The first group calls for Lithuania to open up to the world, recognises the new realities and looks for friends and not enemies both in the world and between fellow-citizens. The second calls for "stone age" values based on who's "against" and "for" - preventing, prohibiting, regulating and punishing.

The members of this group have their heads buried in the sand and do not see the global changes taking place. Thank God we live in a free Lithuania and that we each have the right to choose. I'm for the first Lithuania. And you?