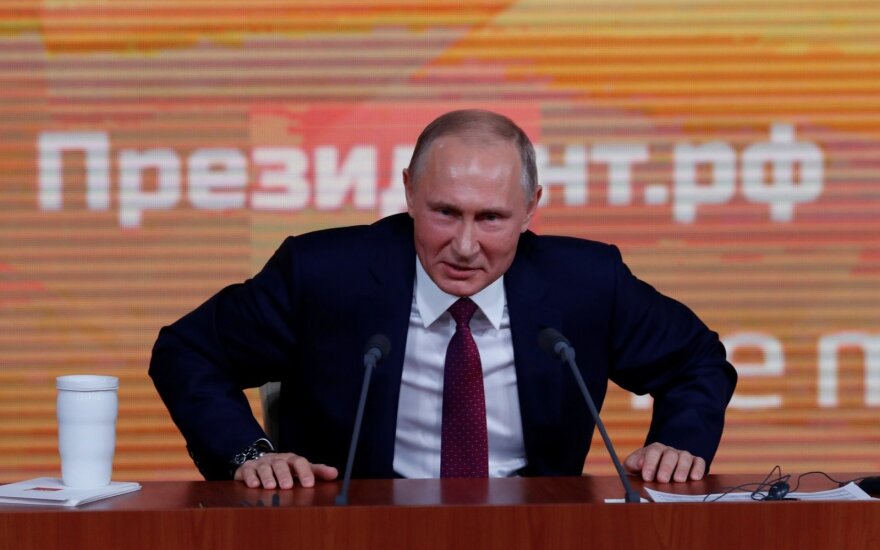 One of the most significant events for Lithuania has been the deployment of the German-led NATO battalion. This was a very concrete deterrence measure against Russian aggression, with the latter performing the Zapad military exercise next to Lithuania in autumn, calling it an anti-terrorist defence exercise, while the real exercise was of a conventional war against Europe and NATO, LRT.lt writes.

The German newspaper Bild wrote on this, based on intelligence data. And this fully confirmed our country's officials and officers' information. Meanwhile Russia has not ceased the information war it has been maintaining against Lithuania and the other Baltic States for the past few years. Attempts to slander post-war partisans were particularly notable. Locals served this purpose too, but the tone was, of course, set by Russian propaganda outlets. And when in July the official NATO Twitter account featured a brief documentary about the forest brothers, a wave of outrage arose in Moscow.

Russian television talk shows were started from the words of a Lithuanian special forces soldier about preparedness to fight.

Incited by the topic, Russian politicians and propagandists labelled the post-war partisans as Nazis, Jew shooters and all sorts of other criminals.

"They were trained by the special services of the Third Reich. Third Reich fascists," the first deputy head of the Russian Federation Council committee on defence and security, Franz Klintsevich said.

"They are those who partook in the bloody ethnic cleansings, crimes and mass murder of Jews," the director of the Russian historical memory fund Aleksandr Dyukov.

"Take Juozas Lukša – he decapitated a rabbi himself, with his hands and said that it would be done to all Jews," the host of the talk show Special Correspondent Andrei Medvedev stated.

The representatives of the Lithuanian military have warned a number of times that one of the main targets of the Russian propaganda generals is the memory of the partisans. They are to be compromised, labelled as bandits and Jew killers. This is aimed at not only slandering the Lithuanian military, but the entire alliance.

"The partisans are a part of our military. They are our military continuity under occupation. This is why they are under attack," Lithuanian military Strategic Communication Department analyst Auksė Ūsienė said.

In autumn the Muscovian efforts to blemish the name of the post-war partisan movement turned into an attack renewed from Vilnius. The author of a book about the Holocaust in Lithuania Rūta Vanagaitė stated that she found compromising information about another partisan leader, 1949 Union of Lithuanian Freedom Fighters declaration signatory Adolfas Ramanauskas-Vanagas, in KGB archives. Vanagaitė shared the information not only in her own country, but also in interviews with foreign media.

"It turned out that he was cooperating with the KGB, that he betrayed all 22 people who hid him when he was a forest brother and finally he began worshiping the Soviet Union, shouted to the court that he would fully cooperate and redeem his faults," the author of the book Mūsiškiai stated.

Pressed by facts and furthermore likely seeking to avoid a potential lawsuit, R. Vanagaitė released an open letter admitting that her opinion that supposedly A. Ramanauskas-Vanagas was not tortured, but harmed himself, was mistaken, that she regrets her rushed and arrogant public comments.

However this lady continues to travel around not only former Soviet, but also Western states where she continues her tales of Lithuania, the land of Jew killers which fears to talk and admit it, yet nowhere does she talk of her mistakes regarding A. Ramanauskas-Vanagas.

To defend from the falsification of history, the Lithuanian state is doing almost nothing. We do not have a state understanding that the presentation of state history to foreign audiences in their languages is vital.

"I believe that in this regard the state, in presenting its history, has, truth be told, done the least," MP Arvydas Anušauskas spoke.

Political analyst Marius Laurinavičius says that the Kremlin regime is seeking to harm the image of Lithuania abroad. What is most dangerous is that there are efforts to sow the seed of doubt in the Lithuanian consciousness, to diminish, erase from memory the post-war partisan struggle and then it would be possible to proceed with raising doubts about independence itself.

"The main classical hybrid warfare weapon is to prime the public so that in the case of a potential occupation or takeover it would not resist," M. Laurinavičius stated.

However unpleasant it may be, but sometimes the wiles of Russian soft power work.

The Plungė municipality saw no problem to take youths to a summer camp in Russia where they spent their free time visiting the Russian armed forces and Homeland war museums, also meeting representatives of the Night Wolves biker club which is patronised by V. Putin.

This only serves to prove that there are no bad measures for Russian propagandists and the information war will not end with the coming of a new year.

Monument to Lithuanian guerrilla commander Vanagas planned in US (1)

A monument to Adolfas Ramanauskas-Vanagas , a Lithuanian anti-Soviet resistance commander, will be...

It is proposed to put up special information boards at sites of mass Jewish graves in Lithuania to...

V. Laučius. What allows to think that on January 13 there was “friendly fire”