(1)
Garrett I. Campbell, Brookings Institution
aA
With great fanfare and “surprise” Russia once again seemingly out-maneuvered Western leadership in Syria. While much ink has been spilled debating whether President Vladimir Putin is executing a sound strategy—or is merely a tactical opportunist—it is clear that he has achieved his primary strategic goal: making Russia geopolitically relevant again and forcing the West to begrudgingly accept that it must take into account Russian interests. But there is an ulterior motive to Putin’s partial withdrawal. 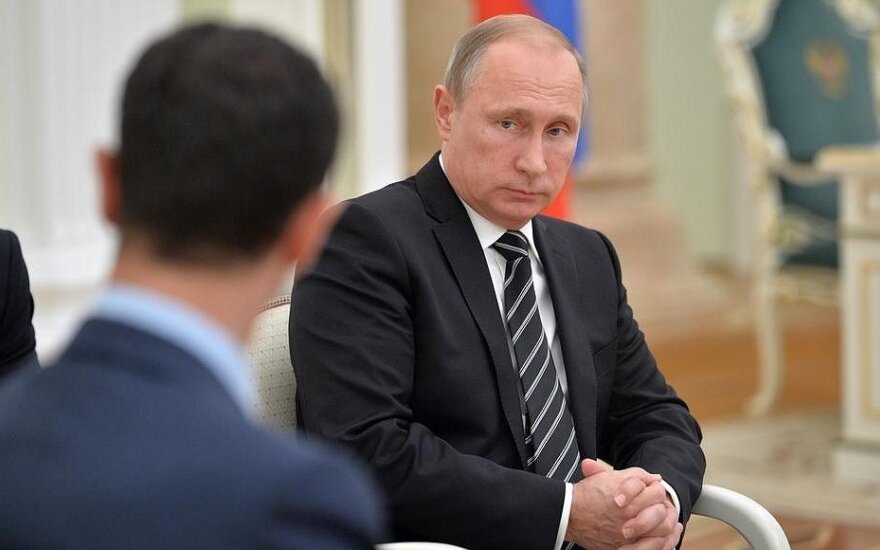 A withdrawal in name only

Hold on a minute. Yes, the Russians are withdrawing some military personnel and hardware—but by and large, it is a withdrawal in name only. Some tactical aircraft have returned to Russia, but we can’t be sure of current levels, as others are newly arriving. Furthermore, we never had precise figures to begin with. It is estimated that there were between three and six thousand Russian troops in Syria before, and what we know now is that the Russians have kept behind enough troops to support their forces logistically at both Khmeimim airbase and the port of Tartus.

Most importantly, however, is that Russia’s deployment of anti-access area denial weaponry—the weapons to prevent the establishment of a humanitarian corridor or no-fly zone—have all remained in place. Russian forces that monitor and dominate the electromagnetic spectrum, a decisive Russian advantage in both Syria and the Donbas in Ukraine, have also remained in place. It appears that the most advanced fighter aircraft, SU-35’s and 30’s have too. Finally, their advisors and artillery, the decisive factors on the ground, are still there watching over the Syrian battlefield prepared for what comes next. Five of them were reportedly killed recently by ISIS near Palmyra.

The message is clear: The remaining Russian contingent is not only capable of sustaining the war, but reconstituting its campaign upon presidential order. By maintaining its anti-access area denial capability against the West and Turkey, it ensures there will be no effort to reverse the balance of power on the battlefield or alleviate the humanitarian disaster that Russia and its allies have helped perpetuate. It sends a clear message to Turkey and others—as does their recent arming of Kurds with anti-aircraft weaponry—that Russia will continue to ensure that no one can overturn its self-proclaimed victory or undermine its re-claimed clout within the international system.

Finally, another group of important actors has definitely not departed Syrian battlefields: thousands of Iranian Revolutionary Guard Corps troops, Hezbollah fighters, a collection of Shiite militias from Iraq and Pakistan, and elements the Russians have motivated to venture to Syria to “patriotically” fight Western designs and or Islamic radicalism.

At this stage, it’s logical that the Russians would remove significant numbers of strike aircraft. They have handed over momentum to the Assad regime, rebuilt its air force and armored forces to an extent, and retrained elements of the Syrian army. Simply put, significant Russian air force presence is not currently needed.

A question of timing

By executing a partial military withdrawal just as Western and regional forces in Iraq and Syria coalesce to take on ISIS in their key strongholds of Mosul and Raqqa, the Russians have made clear that they seek to influence the West and continue to pursue their revanchist path to realign the international order. In other words, the timing of Putin’s decision was not primarily about Syria itself, ISIS, or any other Islamic threat to Russia. Russia’s Syrian intervention, contrary to official arguments, was and is not really about Syria. Putin’s lofty rhetoric before the United Nations General Assembly last September—in which he sought a global coalition to fight terrorism—was more about seizing the limelight than really advancing such a coalition. It was a ruse! Putin is now driving home the point that the fight against ISIS in Syria is Obama’s quagmire to deal with.

Russia has pursued its self-interest in Syria all along, as is demonstrated by its indiscriminate bombing campaign against the Syrian resistance and its apparently broad definition of which groups it considers terrorists. Remember, Putin has said many times that Russia does not have allies but strategic partners—Russia’s actions in Syria have shown as much. Finally, by claiming victory and withdrawing from the battlefield while on the verge of victory in Aleppo and with momentum decidedly in Iran and Assad’s favor all demonstrates a subjugation of its allies’ war aims to those of Russia’s.

So, Russia has completed a partial withdrawal from Syria that is—in terms of battlefield realities and timing—entirely in its own interests. This should not come as a surprise.

Very few believe that the current, fragile ceasefire will last—when it falls apart, Russia will play a central role at the negotiating table. As the biggest world player directly involved in the Syrian conflict, the world now recognizes it must deal with Russia in order to achieve peace in Syria. Russia has assumed de facto responsibility for the ceasefire’s success or failure, therefore its challenge is that it must see its terms through. This is highly unlikely.

Pulling forces out with media hype and ceremonial pomp and circumstance to honor their returning pilots and the families of the deceased is clearly aimed at the Russian domestic audience. It is right to honor those who serve, of course. However, the Russian withdrawal and domestic focus send a message that when the ceasefire fails it is neither the Russians' fault nor responsibility, but the fault of the Western-backed opposition, the United States, and its allies. There are just too many wildcard groups on the ground that are vying for power and land and who do not answer to Russia or to the West (or their respective allies). Russia’s ulterior motive is to prep the political battlefield for the inevitable collapse of the ceasefire and resumption of civil war. Russia must be able to legitimize any actions they deem necessary after that failure occurs. It must be able to show how the West once again failed and portray itself, meanwhile, as the aggrieved party.

The piece was originally published by Brookings Institution

Russian television has thrived for months on a diet of victories in Syria . Now that the time has...

Russia ‘has never sought peace in the Middle East’ – analyst

Russia does not seek peace in the Middle East but has far bigger global strategic intentions, says...

What does Russian withdrawal from Syria mean for Baltics and Lithuania? (1)

Russia's decision to withdraw the majority of its forces from Syria, announced on Monday by Vladimir...

Not clear Russia has achieved its primary goal in Syria, say intelligence experts

The primary goal of Russia ’s military intervention in Syria was to link its actions in Syria to...