The story of the refugee who captured Lithuania's imagination

(1)
the Lithuania Tribune, LRT
aA
Local interpreters who worked with NATO troops in Afghanistan knew they were risking their lives and the compensation many of them received turned out to be inadequate, especially after the Alliance pulled out. 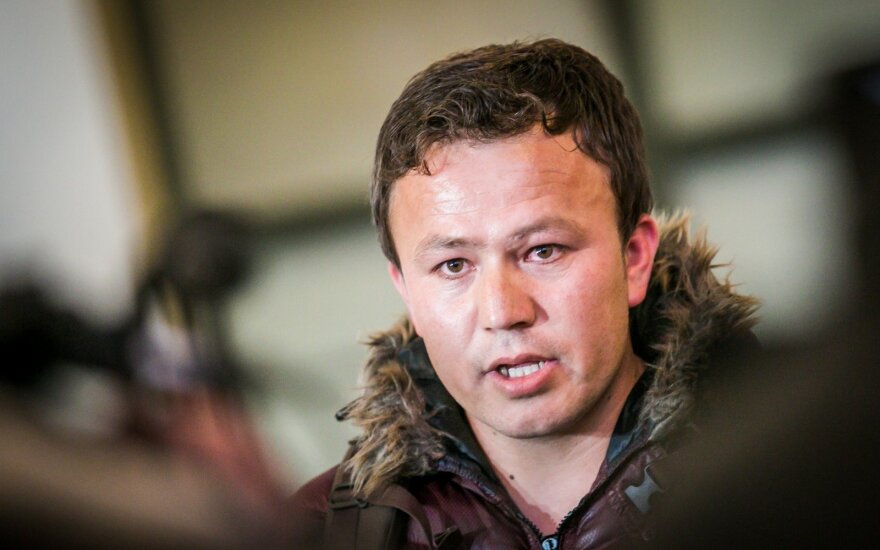 They were the eyes and ears of NATO soldiers who wanted to know the moods of the local population. But some of the local interpreters were left to fend for themselves when the Alliance cut its presence in Afghanistan and pulled out of some provinces completely. One of them was Ghor Province, the home of Basir who once assisted Lithuanian troops there. He has since had to flee his home and ended up in Lithuania last week.

Basir, who speaks Lithuanian, travelled on his own from Afghanistan to Greece. From there, the Lithuanian government brought him to Vilnius.

Lithuania's Minister of National Defence Juozas Olekas said that when Lithuanian troops were leaving Ghor, interpreters were offered the opportunity to resettle in Lithuania, but the army received about ten unofficial requests to use the offer, but not one was satisfied - all the interpreters were given monetary compensation.

Each NATO member state decided individually what to do with local Afghanis they collaborated with. The United States and the United Kingdom set up visa programmes, although the procedure is so cumbersome that some interpreters give up before even beginning on a path that could last years.

Abdul Basir Yoususi worked with the Lithuanian mission in Afghanistan from when it began in 2005. He was then 14 years old, but had to work to help support his family after the death of his father. Basir at first would clean rooms, but later learned some Lithuanian from a doctor and became an interpreter.

However, he said he became seriously afraid for his life after NATO troops withdrew from Ghor. Previously a relatively peaceful province with little support for the Taliban among the local population, it has changed considerably over the last three years.

While Lithuanians say they do not have reliable data about the situation in Ghor, Basir said that the Taliban was growing stronger in the region, as was its support among local people, voluntarily or not. People who worked with NATO missions in Afghanistan are in particularly grave danger.

Basir has received several letters with threats. In one of them, which he has had translated into English, the sender demands money, saying that otherwise Basir will be beheaded.

"I went to the police, my mother then said she had more letters. The police told us they couldn't help me, there were not enough officers to stand by my home."

This was when Basir decided to leave Afghanistan and ask for asylum in Lithuania. He said he wanted to come to Lithuania three years earlier, when the troops were pulling out of Ghor. His relatives would say even then: what will happen to you when the soldiers are gone?

Defence Minister Olekas said that about 30 interpreters who worked with Lithuanian troops in Ghor were given a choice: asylum in Lithuania, resettlement in another place in Afghanistan or cash compensation. Unofficially, at least one Afghani interpreter was given a new identity and moved to Kabul.

Basir received over US$2,000. His monthly salary as an interpreter had been up to $800. Basir said that two other interpreters who worked with Lithuanians fled to Germany a year ago.

"We agreed on our parting terms and they accepted them, although initial positions could have been different. We guided ourselves by the experience of other countries, most used this method of compensation for their services and contribution," Defence Minister Olekas said.

Some countries opted for something different, however. The United States created a special visa programme for Afghani interpreters back in 2009 and renewed it last year. Several thousand former interpreters and their family members have made use of the programme.

However, the terms are prohibitively strict. Mostly only those who used to accompany US troops on military operations got visas, and only after proving their lives were in danger. The procedure is complicated and long.

One Afghani interpreter had to wait for a visa for five years and prove to public servants he was not a Taliban spy. He finally succeeded with the help of Matt Zeller, a retired army officer who served in Afghanistan.

The UK, too, recently had debates about what to do with army interpreters. Public pressure not to leave them behind grew when one of them decided to come to Europe illegally, much like Basir, but was kidnapped and murdered in Iran.

Britain had previously denied him refugee status. Several years ago, the UK changed the rules and would only admit those who had spent at least a year in Helmand Province. Afghani interpreters turned to the courts, but in vain - those who had come illegally were sent back. Britain's opposition parties said the policy was shameful.

Another notorious case involves an interpreter who worked for Estonia. Fearing for his life, Omar, as the interpreter is known, asked for asylum in Estonia after the country's troops had pulled out of Helmand province. The Estonian government, however, refused to give him refugee status, allegedly for fear of a refugee influx.

Basir has had more luck with Lithuania. Having spent almost $7,000 on a dangerous journey to Europe, he was flown from Greece to Vilnius and the Migration Department is expected to grant him asylum or at least temporary protection shortly.

In the meantime, Basir is not entitled to any benefits and said he had to survive on a little more than €100 in his possession. Lithuanian soldiers he worked with in Afghanistan have promised to help him out.

"His biggest problem now is financial. He needs money. We told him to open a bank account, so people in the army could send him money," said Tomas Pakalniškis, a soldier who has served in Afghanistan.

Basir adds that he is worried about the safety of his wife and two-year-old daughter who stayed in Afghanistan. He said that they are moving every two days, staying at Basir's mother or his wife's parents.

He himself does not plan on ever returning to Afghanistan. He hopes to settle in Lithuania.

Photo of the week: Welcome to Lithuania

Afghani refugee Abdul Basir Yoususi was the centre of attention when he arrived in Vilnius...

Lithuanian politician-businessman Antanas Guoga has pledged to give a job to Abdul Basir Yoususi, an...