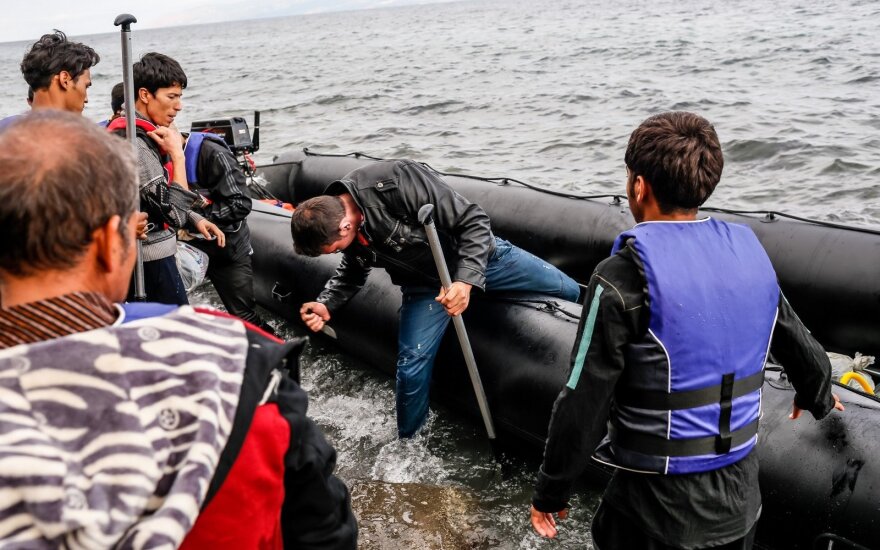 From the very start it was emphasised that Lithuania's strategy is to accept vulnerable refugee families with children, but recent research revealed that in fact the most our system is capable of is to integrate single individuals, particularly young men because they need far less resources, Lietuvos Žinios reported.

"As such of those transferred to Lithuania, the best at adapting were those who were, in essence, the most feared. They are young Muslims. As for vulnerable families, the circumstances in refugee camps were such that we received people that our system was poorly equipped to integrate and they are leaving Lithuania," Dr Karolis Žibas from the Lithuanian Social Research Centre (LSTC) Institute of Ethnic Research said.

The scientist and his colleagues have performed detailed analysis of the various integration areas of refugees. The newest and broadest research was presented in the conference Refugees in Northern Europe and the Baltics: municipal integration.

Lithuania is almost halfway to achieving its commitment to the European Commission to accept 1105 individuals. 441 individuals have been transferred from Greece, Italy and Turkey, but 256 of them have already left the country. Per unofficial data, most of them moved to Germany and Sweden.

The percentage of departed refugees from Latvia is even greater than that from Lithuania, however the researchers were interested in why so many transferred refugees leave our country, rather than integrate. The first argument, according to Dr K. Žibas is that they had already been thinking of arriving in Germany or Sweden in the camps. In this regard their transfer to Lithuania is very interesting. The government views the first, larger grant as a reason to integrate, but research shows that in fact it is a departure grant instead because after taking it people typically left.

"On the other hand we have to view the refugee integration process in the broader socioeconomic context of the country. When emigration rates are among the largest and the Lithuanian labour market is abandoned by a large portion of locals, who speak Lithuanian, have jobs, relatives and connections, it is naïve to expect that refugees who are vulnerable, have psychological difficulties, do not know Lithuanian, do not have friends, family or work will remain in Lithuania," the researcher said.

The breaking point of refugee integration, according to Dr K. Žibas, was the 2015 Lithuanian – European Commission agreement on refugee transfers because from then on, during the two and a half years, more positive shifts have occurred than over the past 10-15 years. The public has begun discussing and finally understanding what refuge is. The state is beginning to grasp what integration means. This is evident from decisions made in recent months. A trial project has been initiated which allows individuals to integrate directly in municipalities, rather than in the Rukla refugee centre. Jobs for refugees are subsidised. No less important a decision was to equalise the status of protected individuals and refugees.

"However we have only individual optimistic attempts to improve refugee integration policy. There is a lack of overall state level understanding and political will. Will we look at refugees as temporary guests and labour force or will we think of them as future citizens who can enter our jobs and at least partially resolve the country's demographic situation in the long term.

Are we talking about citizenship, political participation in state life or just about those fairly traditional and conservative integration elements such as language, cultural understanding and work," the scientist wondered, "The answers to these questions have to be presented by the state and cabinet. Then we can perhaps expect more effective integration."

Political will is crucial to, according to Dr K. Žibas, raise the question whether the Rukla refugee centre is needed at all. Is it the best place for integration? It has long been discussed that the sociocultural environment is truly limited there.

Integration happens in municipalities. However Lithuanian municipalities have minimal or no involvement in this process. It is organised by NGOs. This is not bad, the researcher stresses, but in seeking to ensure financial stability and coordination, municipalities should be involved. In other countries, such as Germany or the Scandinavian countries, everything is coordinated by the regions, they are also centres of socioeconomic resources.

"Lithuanian municipalities not only do not get involved in refugee integration due to a lack of political will from the mayor down to the administration, but also due to a current lack of strategy and guidelines. Municipalities do not have even elementary experience in working with refugees. Over the past 15-20 years we have seen the NGO sector working with refugees, while the municipalities, we must admit, currently lack language and intercultural competences, overall lack the ability to view this problematic from a practical perspective," Dr K. Žibas said.

The scientist is certain that it is also very important to involve the private sector into refugee integration processes. In many countries there are cases of the business sector exhibiting social responsibility. Employers view refugee integration not only through the economic, but also through a social prism. They strive to integrate refugees into the labour market not only because it is financially beneficial, but also because they wish to help. In some European Union countries a practice has established itself that refugees are employed by creating a certain variety control mechanism at work and a friendly environment between colleagues.

However research shows that in Lithuania there is a lack of employer involvement in refugee integration processes. Refugees are often vulnerable in the labour market. When labour is lacking, the private sector seeks individuals that can be paid lower wages or makes use of positive discrimination – state subsidised jobs.

"While employers are increasingly talking how Lithuania lacks labour, we must consider how to link the business sector with the refugee system, so that employers would see what resources are available, while refugees could work. However at the same time we need mechanisms to prevent exploitation and vulnerability, which would guarantee conditions that ensure human dignity and living conditions," Dr K. Žibas stressed.

According to the researcher, it is popular to talk about returning exploited Lithuanians, but eyes are shut to the exploitation of foreigners in Lithuania. The forms of foreigner exploitation have, in some cases, grown into human trafficking and modern slavery. In this respect refugees are also a challenge because due to their vulnerability and large numbers in many countries they are exploited.

Unwilling to stand in the same line

In a 2016 survey it was displayed that more than half of Lithuanian citizens do not want the country to participate in the refugee transfer programme. The Lithuanian public agrees that refugees face various problems, struggle to learn the language and find work. Another noted refugee integration problem is the negative views of the public, albeit dr. K. Žibas points out that the public demonstrates such views itself.

"Lithuanian citizens are rather unwilling to stand in one line with refugees for economic resources. However Lithuania is no exception. Research shows that in Great Britain, even prior to Brexit, the Brits were unwilling to line up with Lithuanians, Poles, Romanians or Bulgarians. Such is likely the nature of immigration and integration, it creates conflict over resources. Clear communication is needed to overcome this barrier," the scientist said.

According to the research data, more than 80% of Lithuanian citizens believe that refugees may increase crime rates in the country and could cause social unrest. While most arriving refugees are moderate Muslims, the public's views on refugee religious rights and practice in public or at work were also analysed for the first time. The research showed that Lithuanian citizens are uninclined to support Islamic practices in public or at work or support the construction of Mosques. On the other hand, Dr K. Žibas stresses that one must not forget that Islam is not a traditional religion in Lithuania.

Another 10 refugees from Eritrea arrive in Lithuania under EU program

Another ten refugees from Eritrea have arrived in Lithuania under the European Union's (EU) program,...

The number of refugees relocated to Lithuania under the EU's resettlement program has reached 400,...