The President and the future PM – has the axe been buried? 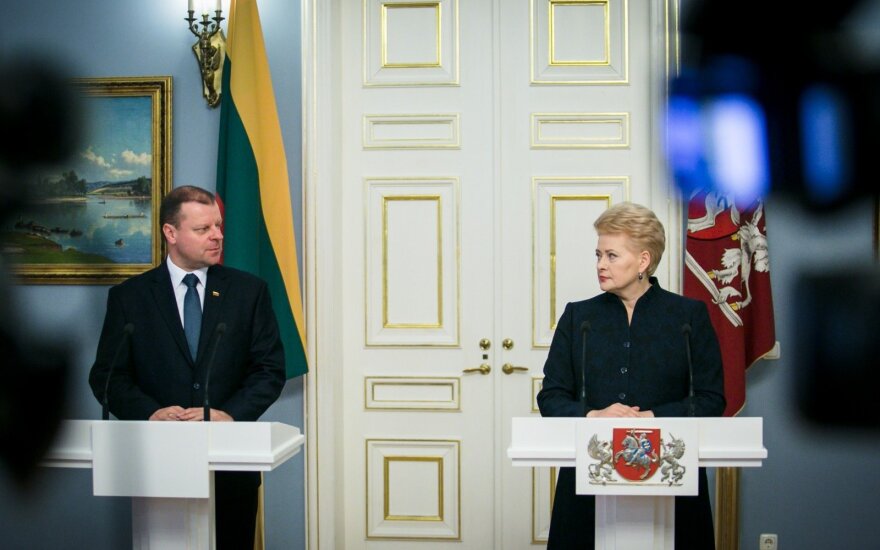 President Dalia Grybauskaitė has signed a decree that proposes Saulius Skvernelis as a candidate to the post of Prime Minister. Only the blessing of Seimas is needed now. The President, in her typical fashion, has warned Skvernelis that she will be demanding toward him and his cabinet, while Skvernelis has been unwilling to recall the bad blood between him and the President from years ago.

To the Presidential Palace by foot, just as when he was a minister. Soon to be PM Saulius Skvernelis arrived for a discussion with Dalia Grybauskaitė, among the discussion topics – the future list of ministers.

The meeting lasted somewhat longer than planned – the closed doors discussion lasted over an hour.

The President later said that in approving Skvernelis’ candidacy, she is partially taking responsibility for his and his cabinet’s work. Thus she will assist and supervise to her highest capacity.

“I want to assure the Lithuanian people that I will remain constructively demanding. So that the government decisions to not breach the Constitution and the interests of the state and the people. This much I can promise. Exactingness will remain,” stated Grybauskaitė.

The President took no questions from journalists, thus it is unclear whether all of Skvernelis’ proposals were agreeable to her. It is also unclear if the conflicts of the past are forgotten because Skvernelis clashed with the President twice during his term as minister.

Opinion polls show that it was specifically after the clashes that his popularity skyrocketed. The first time Skvernelis publically opposed the President was after a smuggler was shot at the border. The second time it was when he clashed with the President and Seimas Speaker Loreta Graužinienė after the Molotko scandal.

Graužinienė was angered that Skvernelis was rude toward her and did not provide information on the operation, while the President expressed a lack of confidence in him.

“I have to regretfully say that it is not the first time that the minister is demonstrating poor political tact, attempting to comment or not accepting, or understanding his personal responsibility,” Grybauskaitė spoke then.

After this conflict, Skvernelis gave in and tendered his resignation to PM Algirdas Butkevičius, despite the PM urging the minister to stay in his post. And as all opinion polls show, Skvernelis was once again the victor.

SocDems – there are efforts to antagonise the coalition partners

Publications which keep appearing in the media have been trying to create antagonism between the...