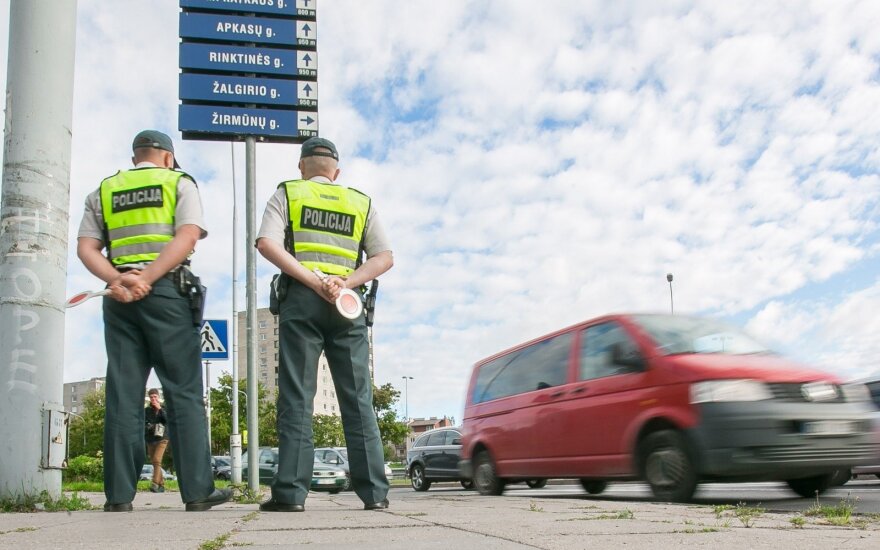 Although, police officers to LRT.lt assured that travel by car on Lithuanian roads is perfectly safe, thus there is no need to carry a knife with you. Traveller Vitoldas Milius reminds of the tragedy that shook the entire country, when a girl was kidnaped and killed in Lithuania. "It caused a lot of questions and concerns that still need to be answered. After which Lithuanians no longer need to think worry about buying a better car that might be stolen from them, but rather whether it is safe to travel in Lithuania all together" – V. Milius stated to LRT.lt.

Summer - is the time to travel. It is a time when the street in the cities become less crowded and the amount of cars traveling to several particular regions in Lithuania increase.

More recently, Lithuania survived a real nightmare after a girl driving from Plungė to Vilnius was attacked, kidnapped and killed. Although, initially based on primary data the reasoning for the attack was thought to be the car. After the tragedy several alternative tales where shared with the Lithuanian media pertaining to instances when during plausibly staged car incidents people were attacked in order to steal the automobiles. Thus, this raised the question whether or not travel in Lithuania by car is safe?

V. Milius: the belief was changed by this year's events

The chief travel editor of the magazine "Auto Bild Lietuva" Vitoldas Milius has repeatedly stated that the story of the kidnapped girl fundamentally changed the belief that the times of cars being stolen that were common in the early years of Lithuania's Independence were over.

"The very idea that those ties could once again return and anything similar that happened during those times was unthinkable. Although, decades ago almost anything could have happened not only on the roads but also everywhere. Thus, was the calling card of those times, when young men with broke noses came up to a person and demanded for him to give them all his money" – V. Milius continued.

According to, the traveller the disaster that happened several months ago has remained a secret and it is still unclear if everything that happened was just an accident or was it calculatedly planned. "There was no report issued later on, in regards to what truly happened. If there was a reason and the people did not act randomly it would be justified to state that all kinds of things happen, and there are many interests. However, if someone truly validates that this happened because of the car, I will be incredibly surprised by the fact. I, sincerely hope that during my life time someone will provide and explanation for this" – stated V. Milius.

Thus, according to V. Miulius the incident raised several questions which still need to be answered. "After them Lithuanians would no longer be left questioning whether buying a higher quality car is a good idea, if the vehicle could be stolen from you" – the traveller noted further to LRT.lt.

According to, V. Miulus because of this story some people no longer find travel by car in Lithuania safe and cosy. "Personally, I myself still find travel safe and cosy. I – am an old uncle that has lived through several different periods of time, and my eyes have seen many things. Personally, I find animals that run onto the road to be more dangerous than a possible risk of bandits." – stated the traveller that has visited more than a dozen of countries and more than a single continent.

In turn, during an interview to DELFI Linas Pernavas the Lithuania general police commissioner stated as over the last three years crime rates in Lithuania have been steadily decreasing. "In regards to specific figures in 2015 we have registered only about 80 thousand crimes, while last year we only registered about 60 thousand. Talking about serious and highly serious crimes, in comparison to the previous the crimes decreased by 13 proc. Last year." – L. Pernavas calculated. The General police commissioner further to DELFI stated that recently the public has become more conscious and intolerant of such things as the murder of Ieva Strazdauskaitė, as well as the brutal slaughter of a family in the Gaižėnų village in the Kaunas region and etc. The public according to the commissioner has become intolerant in regards to such crimes.

The chief traffic officer: travel in Lithuania is safe

According to, Lithuania's chief traffic officer Vytautas Grašys statements, travel in Lithuania is safe, and the times of racketeering are over.

"Anything can happen on the road, but I do not remember that someone was stopped and robbed on the road. Furthermore, infrastructure of the roads is very attractive in regards to possible trips and travel, thus you can travel safely. Additionally, there is more police force on the roads than before" – the officer stated.

Inclined with the statement of V. Grašys while traveling by car people need to take several very basic precautions. "We all know that travel at night has its own challenges, especially regarding the poorer visibility that can effect traffic safety. Thus, one should not stop along the road side, but rather in the specially designed and lit roadside lots" – the officer stated.

Moreover, Lithuania's chief traffic police officer V. Grašys also advised to follow general safety rules – not to leave the car unlocked and not to leave valuable items in visible places in the vehicle.

"I do not think that you need to travel with knives. Furthermore, I really do not think that the situation on the roads is so bad. Security, in Lithuania is on a sufficiently high level and I could certainly advice against traveling with knives. Carrying a self-defence gas bottle, is sufficient enough in my mind and it will not get in the way, but the criminal situation is not so bad that every time someone stops they are attacked" – stated V. Grašys.

Furthermore, according to the officer it is also important that during travel driver comply with the traffic rules, that the passengers and they themselves will always wear seat belts, refrain from driving like hooligans, avoid using their mobile phones while driving and do not rush the drive.

"If there is a necessity, you need to call the number 122 and help will be provided as soon as possible. We ensure the safe participation in traffic. Thus, making sure that everyone participating in traffic is safe. I want to assure you that police officers are sympathetic and ready to assist. Thus, if you are lost you can surely receive help from them" – further noted V. Grašys.

A few tips that are necessary to know when preparing for travel:

- Before setting off on your trip make sure that the car is prepared for the journey – check the headlights, oil, tire pressure and the level of anti-freeze flued, as well as make sure to have a full tank of fuel.

- If you are driving a rented transportation vehicle, before driving make sure to acquaint yourselves adequately with the car and its equipment.

- Make sure to plan your travel route before the trip, and make sure to check the weather forecast beforehand as well. Additionally, do not rely solely on the navigation of your phone or the cars navigation system, make sure to always have a printed route for your travels.

- Plan your trip in such a way that upon entering the city would not immediately enter a traffic jam. This will safe you both time and fuel. Moreover, phone apps such as "Google Maps" and "Waze" may be of help to you.

- Before driving to a foreign country make sure to look up its traffic rules – the basic things mostly, that are necessary to know and can be easily found on the Internet.

- Moreover, a good night's sleep before the trip as well as a good food will allow you to travel well rested and with an improved mood. Furthermore, make sure to take small breaks when travelling that would allow you to take a short walk or eat a snack, make sure to also drink plenty of fluids and breathe in the fresh air. You should stop about every two hours or around 150 km., or if possible alternate driving with a friend.

- Make sure to only stop at places where it is safe. Never leave your vehicle on the road, unless it is an emergency or you are involved in an accident.

- Make sure to prepare yourself for emergencies – keep a blanket in the car, as well as warm boots and extra clothing.

- Before leaving, make sure to protect you home. Do not inform thieves on social network when you are leaving and when you will be back. There is a number of modern technologies that allow to leave the light turned on at home when you are traveling – to make thieves think that someone is in your home. Another simple advice for travellers is to make sure to ask someone to check the house, either neighbours or family members.

- Finally, just relax. Make sure to drive calmly and do not forget to feel the joy of driving. Do not fret over other undisciplined drivers on the road – do not let them ruin your trip.

International European law-enforcement institutions have called upon the society for help in finding...

In any emergency time and first responders reaching the right location are key elements. Improving on...