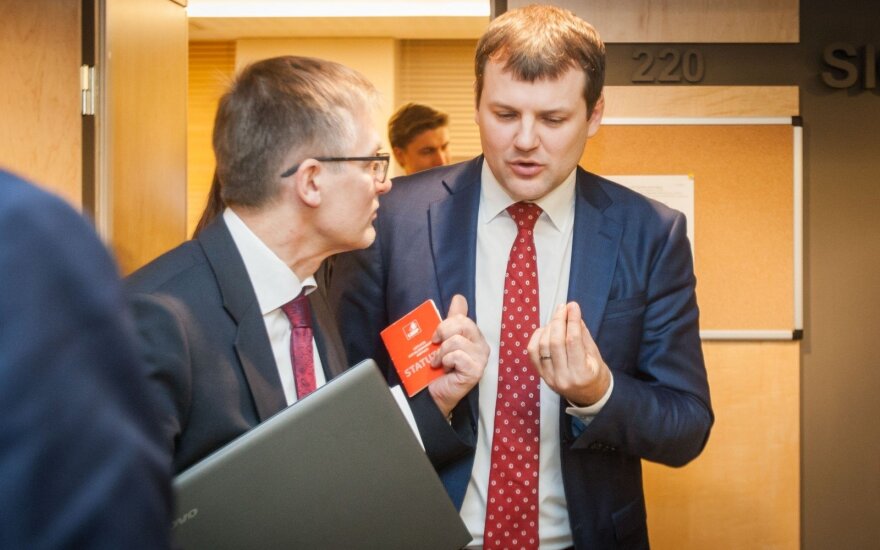 Mindaugas Sinkevičius, Zigmantas Balčytis and Gintautas Paluckas are the three Social Democrats who, according to experts, are the most likely to take leadership of the Lithuanian Social Democrat Party (LSDP). However the SocDems would likely be better off with Vilija Blinkevičiūtė in the lead, although she will likely not vie for the post of party chairperson.

Related articles
SocDems– coalition with “Peasants” not satisfactory, agreement will have to be reviewed
Sabatauskas, Palionis join race for leadership of SocDems

By February 6th the LSDP branches proposed 11 candidates to the post of party chairman. In the first ever general LSDP chairman election every party member will have the right to vote at their branch for their chosen candidate.

The new LSDP leader should be announced on May 2nd.

A. Butkevičius to remain an influential figure in the party?

LSDP Chairman Algirdas Butkevičius confirmed in mid-January that he will not seek re-election.
“As you know, I have chosen to not seek re-election in the coming party congress. The LSDP did not win the Seimas elections and I, as party chairman, accept political responsibility. I decided so even before the announcement of final Seimas election results and I will hold to my words,” Butkevičius said.

“I believe he would have chances (to be re-elected), even rather good ones because he has strong support in the party. However I agree with the stance he is currently taking – refusing to run for the office, this way yielding positions to others and providing an opportunity for new leaders to appear. However he is not abandoning his positions completely. He is remaining in Seimas which means he will remain an influential political figure and his role, I believe, will be very important for the new leader as well,” Bielinis told LRT.lt.

Meanwhile public relations consultant Mindaugas Lapinskas notes that it would only be possible to evaluate any electoral chances for A. Butkevičius in the party chairman election if the politician had held a consistent position. “However he is not among the candidates and if he suddenly did appear among them it would stress even more that he is not a decisive person and cannot make up his mind. Overall I would view his chances as fairly good, however <…> in the public there are some doubts on his decisiveness,” Lapinskas summarised.

In reflection of the list of 11 SocDem candidates, analyst for the Lietuvos Rytas newspaper Vytautas Bruveris notes that the majority of the politicians are entering the election as a means of personal advertisement.

“They are still running for the office despite understanding their chances are low. On the other hand there is no undisputed favourite, the capacities of the main candidates are equivalent. Who knows, perhaps a second tier candidate is secretly thinking that where two are fighting, the third wins?” Bruveris mused.

M. Lapinskas thinks so as well, noting that 2-3 candidates are pursuing victory in the election, while the others have other goals.

“There are those wishing to augment their fame and establish themselves as a leader in a group. The third perhaps wants to bring a message that the party needs reorganisation. This is similar to the Lithuanian presidential election, 2-3 candidates look serious, all the rest are more like Šerėnas,” M. Lapinskas explained.

According to political analyst V. Bruveris, the main candidates to the post of LSDP chairman are clear – Z. Balčytis, M. Sinkevičius and G. Paluckas, stating that “Who of them will win is hard to say. M. Sinkevičius’ prospects look to be the best, though Z. Balčytis has support from older voters in the province. The votes will spread out and one of these three will likely enter the second round. I would cautiously hazard to guess that the best prospects are those of M. Sinkevičius.”

Nevertheless Bruveris notes that no candidate is one who could bring the party back to the heart of national politics. “It is currently fashionable to seek youth in parties, thus this argument would be in favour of M. Sinkevičius, however looking at him in the post of minister in one of the most important ministries, he does not stand out. If he was truly preparing to lead one of the main parties, he would have to be outstandingly active and would need to be more visible in the political arena. Perhaps he is still gathering strength,” the analyst mused.

VDU political scientist L. Bielinis sees two serious candidates in the list – Z. Balčytis and M. Sinkevičius. “I believe M. Sinkevičius‘ chances are better because he is very active right now, travelling across Lithuania and campaigning. Meanwhile Z. Balčytis is preoccupied in the European Parliament. I would not say he is forgotten, but his inadequate activity will be an obstruction in this election,” Bielinis explained.

Public relations consultant M. Lapinskas observes that there is a lack of debate between the candidates.

“There is nothing to be heard among the Social Democrats. I do not know what they are proposing. If their fellow party members are informed similarly to the Lithuanian public, the fight will likely only happen among the most known names. Everything will depend on the activity of voting,” Lapinskas commented.

LRT.lt earlier announced that former Minister of Social Security and Labour, MEP Vilija Blinkevičiūtė is seen as a favourite in the LSDP chairman election. However that she was elected European Parliament Committee of Women’s Rights and Gender Equality chairman could significantly shift the Social Democrat chairman elections.

After becoming the chairwoman of the EP committee, V. Blinkevičiūtė stated that she has not yet decided on candidacy to party leadership, but for now the likelihood is greater that she will not pursue the post of chairperson.

L. Bielinis notes that among all the candidates to LSDP chairperson, the name of V. Blinkevičiūtė holds the most weight. “But we understand well that now, on receiving a high and responsible post, she would likely not be able to lead a party in Lithuania. I believe that she will have to refuse (running for the post of LSDP chairperson),” the expert added.

“If we are to look at the competitive environment, a female SocDem leader would look good. Just so that debates on LRT Television would not appear like a men’s bat. Looking at the competitive environment, M. Sinkevičius or G. Paluckas in the face of Conservative leader Gabrielius Landsbergis or Liberal Movement leader Remigijus Šimašius would not be an optimal option for party image. The Social Democrats could project an image of being solid, reliable and stable statesmen with a somewhat older politician, not necessarily of the age of Z. Balčytis.” M. Lapinskas said.