Rimvydas Petrauskas | ldkistorija.lt
aA
The Lithuanian dukedom was in existence for 10 years only: from the coronation of Mindaugas in July 1253 to his murder in 1263. Later two more attempts to create the Lithuanian Dukedom were known. Grand Duke of Lithuania Vytautas tried to do that at the end of his life in 1429–1430. In 1526, a new plan was born at the Council of Lords of the Grand Duchy of Lithuania to establish a separate Kingdom of Lithuania by crowning Sigismund August, the juvenile son of Sigismund the Old. Both of these attempts failed. 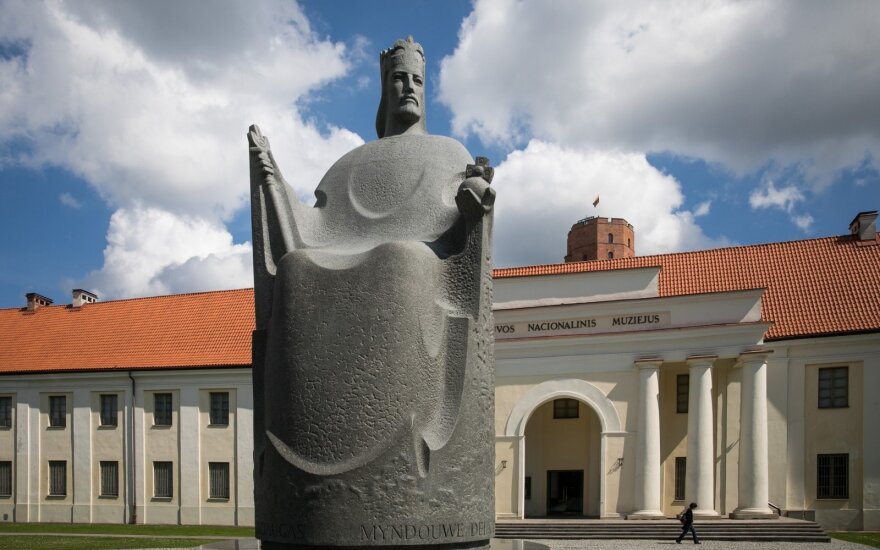 Lithuania is the last medieval dukedom

The institutional conception of a Christian dukedom and the Christian King was established in the Latin Western world in the Middle Ages, which related the exaltation of the King to the ceremony authorised by the Pope (sometimes by the Emperor) and accompanied by the anointment of the (Arch)bishop. This procedure was initiated in 754 when Pope Stephan II crowned Pippin the Younger, the King of Franks in Sen Deni. In the mature Middle Ages this procedure of founding dukedoms and coronation spread all over Europe, from the Pyrenees to Scandinavia and Central and Southern Europe. The first half of the 13th century witnessed the last intensive stage of the development of this tradition when in 1204–1253, with the Pope's blessing, and sometimes with his own hands, one after another Peter II of Aragon Spain, Kaloyan the Romanslayer of Bulgaria, Stephan of Serbia and Mindaugas from Lithuania were crowned. It was Mindaugas who was destined to become the last newly anointed King (the simultaneous exaltation of Galicia–Volhynia Duke Daniel Romanovych remained unfinished). Despite different attempts, no more dukedoms were established in Europe in the Middle Ages.

The issue of the rank of the dukedom was solved at the international level therefore the international situation was an important factor. In Mindaugas' case the political conjuncture was favourable to the birth of new dukedoms. At the beginning of the 13th century we see the new, as later tuned out, the last wave of founding Christian dukedoms. After the death of Holy Roman Emperor Frederick II (1250), Pope Innocent IV intensified the political actions by strengthening the positions that were weakened during a long-lasting conflict with the Emperor. Mindaugas' envoy Parbus accompanied by the intermediaries of the Livonian Order, found Innocent IV in Milan, during the Pope's solemn journey to Rome. Blessing of the new dukedoms in the peripheries of the world was a long-established tradition of the Holy See. It is not surprising that at the same time the Pope negotiated with Mindaugas' neighbour and his political rival – the Orthodox Duke of Galicia-Volhynia Daniel Romanovych over the coronation. Intermediation of the Master of the Livonian Order Andreas von Stirland and efficient diplomacy of Mindaugas determined a rapid course of the events: not only the coronation of Mindaugas and Morta on July 6 1253 but also assurance of the continuity of royal power. In 1255, Pope Alexander IV permitted to crown Mindaugas' son too – the heir to the throne. However, in case the continuity broke, the name of the kingdom and the royal title could be lost. The Pope and other Christians understood the murder of Mindaugas and his legitimate offspring as the end of the "Christian kingdom". True, it could have been re-established, as once even the Roman Empire was re-established. Therefore Pope Clemens IV in his Papal bull of 20 January 1268 to King Ottokar II (Czech: Přemysl Otakar II) commissioned him to "build the throne of the kingdom in it (Lithuania), as it was done under the rule of the late Mindaugas".

The main motive in seeking to obtain the crown was the issue of the exclusive rank. The coronation ceremony singled the person being crowned out of all others who could put claims to political power. It is not in vain that anointment and the coronation are accentuated in the privilege written in the year of the coronation of Mindaugas to the merchants of Riga: "Anointed with the holy oil we were promoted to the rank of King of Lithuania and we put the King's crown on." Having been spiritually adopted by the Pope, Mindaugas found himself in a different spiritual and political reality. In this sense the process of the creation of the Lithuanian nation and the State of Lithuania resembled ethno-genesis and the formation of a political organisation of other European countries in which the major role was assigned to the structure of the Christian Church that still remembered the antique tradition and to the organisational model created by it. On the other hand, a successful spread of Christianity was possible only where stronger political formations existed. We find this universal tension in Lithuania in the middle of the 13th century. Mindaugas, assisted by his soldiery, started expansion from the inherited domain, which spread in the present South Lithuania. His power, however, encountered a serious problem of legitimisation. The royal baptism of Mindaugas and his surroundings in 1251 resolved a twofold political problem of the Lithuanian Ruler. The Papal bull of the Pope Innocent IV of 17 July 1251 declares that "we accept the kingdom of Lithuania and all the lands which with God's help you snatched from the hands of non-believers or will be able to snatch in the future into Saint Peter's right and ownership". In this way Lithuania acquired the status, which England, Hungary, Poland and the Teutonic Order had. The danger to become a part of the political system of the Order or another state in the future was eliminated.

The King is killed but the idea of the statehood survives

On 6 July 1253, according to the coronation ceremony established in the Middle Ages the Bishop of Chelmno (Culma, Kulm) Henryk crowned Mindaugas and his wife Morta. New royal power enabled Mindaugas to establish the position of a sovereign ruler in the family of the Christian kings of Europe, to stand out among other leaders who made claims to power inside the country. Therefore the baptism and coronation influenced strongly the process of the creation of the Lithuanian State. The dukedom remained a temporary episode in the history of Lithuania, Mindaugas and his direct descendents who could make claims to inheriting the crown were killed, the coronation did not acquire continuity. However, despite later political upheavals and the country's relapse to paganism, the monarchy remained the main form of power though in the international sense the recognised status of the kingdom was never reached again.