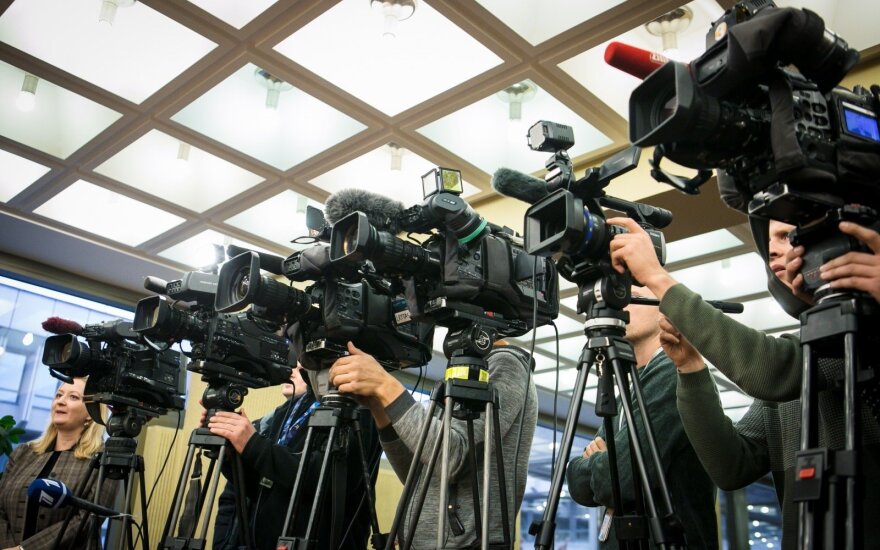 The Lithuanian Farmer and Greens Union (LVŽS) and its leader Ramūnas Karbauskis have recently often spoken about the media attacking them being “corrupt”, though during the Seimas election campaign they spent almost twice as much as any other party on article commissions. Analysts note that the articles commissioned by the “Farmers” were notable for their aggressive rhetoric and the foundation of the information provided was to cast a shadow on all those in government previously, Lzinios.lt reported.

Several days ago LVŽS Seimas group leader and party Chairman R. Karbauskis released a text titled “Our achievements will speak for us” and in it declared that there is a pre-made plan where the media is acting against him and his party, with funding for it supposedly arriving from affluent interest groups which want to obstruct changes in alcohol control and other spheres. “There are many excellent journalists in Lithuania and I respect their efforts to inform the public and constructively criticise the government. However certain individuals who call themselves journalists discredit not only themselves, but all of news media,” the head of the LVŽS said.

According to financial statements released by the Central Electoral Commission (VRK) related to political advertising, during the Seimas elections the LVŽS spent more than any other party on news media and public relations expenses – 1.124 million euro.

“The LVŽS electoral campaign was notable for its aggressive rhetoric. One of the most favoured methods was R. Karbauskis statements which strongly attacked opponents. This party based its campaign not on negative information, but on escalating negative news, even if some of them, say problems caused by alcohol or children in harm’s way had a real basis. The purpose of all these messages was to cast a shadow on those who already were in government,” communications consultant Arijus Katauskas told Lietuvos Žinios.

Of the more than 1.1 million euro spent on political advertising, the LVŽS did not pay most of the sum by the end of the elections – 874 thousand euro. LVŽS vice Chairman Tomas Tomilinas earlier told Lietuvos Žinios that these debts are to be covered over the next few years with the dotations granted to parties that enter Seimas – more precisely via tax payer’s money.

The “Farmers” commissioned most of their advertising on television channels and in the major internet portals, they also commissioned articles in various publications. One of the first LVŽS commissioned articles appeared in the newspaper Ūkininko Patarėjas. Last April a text was published in it – Saulius Skvernelis – a non-seasonal person – which cost the party 4174 euro. Over 30% of the newspaper’s stock is owned by R. Karbauskis. Earlier the LVŽS leader claimed that raising questions regarding his wealth is yet another attempt to use negative rhetoric against him.
LVŽS “fed” voters with texts up until autumn presenting the party’s candidates, congratulating with various celebrations and informing of events. Articles of a broader spectrum appeared in late September last year. “By passing the new Labour Code, the majority has spat on the people” – such was the title of an article published by R. Karbauskis in in Kauno Diena, criticising the then Seimas majority’s decision to reject President Dalia Grybauskaitė’s veto regarding legislation regulating labour relations. This cost the party 2651 euro.

With just a few weeks left the LVŽS commissioned texts on this topic in several publications at once. The newspaper Lietuvos Rytas featured the article “The majority has betrayed working people”, at a cost of 2174 euro. A similarly named text “The majority has cynically betrayed all those working” in the newspaper Vakaro Žinios cost 1810 euro.

Commissions in the thousands

On October 1st, with a week and a half to go until the Seimas elections, the LVŽS paid for articles on the same topic in a number of publications. Lietuvos Rytas published an article valued at a thousand euro “They are intentionally lying to you”, where information that the “Farmers” negotiating with other parties on a coalition deal already was denied. “Rumours of a supposed LVŽS coalition agreement with the Conservatives are being spread by the Social Democrats, while the supposed LVŽS agreement with the Social Democrats – by the Conservatives. This is done in order to make the people, who are disappointed with the parties which have been in government many times before, not vote for the Lithuanian Farmer and Greens Union, which could break down the decades of Social Democrat and Conservative domination,” the publication stated.

Soon, after the TS-LKD commissioned a presentation of its electoral programme New Plan for Lithuania in the media, its announcement cost 116 euro in the regional newspaper Kalvotoji Žemaitija and 2541 euro in the publication Savaitė and at the same time the LVŽS commissioned the text “For your judgement – a plan of real change for Lithuania”. This publication cost 2134 euro in Lietuvos Rytas, 2525 euro in Kauno Diena, 1215 euro in Vakaro Žinios, 1379 euro in Vakarų Ekspresas and only 339 euro in Alytaus Naujienos.

With only three days left to the second round of Seimas elections, a group of publications featured R. Karbauskis’ text “A matter of conscience and honour” where the “Farmer” leader apologised to voters for the supposedly surfacing talks that “the LVŽS will receive votes from uneducated provincials, who do not understand the vision of Lithuania’s future”. “I apologies to those who support us, toward whom such talks are directed because politicians who speak so are truly afraid that after decades of stagnation, real change may begin in Lithuania, that it will no longer be party clans or family ties that will provide opportunities to seek employment in state institutions or companies,” the politician wrote.
This text was commissioned for 4254 euro in Kauno Diena, 2304 euro in the newspaper Klaipėda, 1883 euro in Vakaro Žinios, 1341 euro in Sekundė and 701 euro in the Biržai region publication Šiaurės Rytai.
More than 3 thousand euro was paid by the LVŽS for the “research” published by Lietuvos Rytas and Vakaro Žinios named “Corruption schemes in heating infrastructure”.

The text “How lies are made into fighting implements” was commissioned for 1341 euro in Sekundė, 3829 euro in Kauno Diena, 2161 in Vakaro Žinios and 1966 euro in Vakarų Ekspresas.

Not stooping to the same rhetoric

“At the time the LVŽS representatives acted very aggressively, criticising everyone and claiming that it matters not whether it be the Conservatives or the Social Democrats – if either is elected, there will be no changes and the LVŽS is the only choice. This strategy of theirs was completely complemented by information distribution and theme arrangement in the public sphere. As we can see the decision was beneficial to them,” A. Katauskas spoke of the electoral period.

According to him, the texts commissioned by the LVŽS were intended to shape public opinion. “They were, in essence, doing what they now accuse the media of. The difference is that during the electoral campaign the information presented was a matter of advertising channels which sell space and not news media. Currently the label of corruption is being imposed on specifically news media. Here the “Farmers” “forget” that they themselves purchased the opportunity to criticise their opponents and are trying to defend by accusing journalists because they can no longer use the same method,” the communications consultant explained.

According to Katauskas, during the electoral period, criticism through commissioned articles is possible and the appearance of texts commissioned by parties is overseen by relevant state institutions. “The current LVŽS position in regard to news media is far more dangerous. If a political party has the funding to purchase advertising space, let it proclaim its stance, but there will still be more objective content in the media nevertheless. In this case the party is attacking all of news media, disregarding the potential repercussions. Without critical news media, there would no longer be anything that could present inconvenient questions to politicians and people would lose the chance to obtain holistic information, thus we would have a situation rather similar to the East,” he stated.

According to analyst Rimvydas Valatka, it is better not comment on the accusations levied by R. Karbauskis and his supporters at the news media because by getting involved in such rhetoric, it is possible to gradually become just like them. “In a free country everyone can criticise every decision of the government. Everyone criticised has the right to self-defence – the Constitution allows this up to the Chief Court or even Strasbourg court. As a citizen of a free and open Lithuania I would not want to speak in the terms of “urkas” [criminals, Russian], that are being used by R. Karbauskis. In a free society every individual can do anything that the law permits. And if it permits us, why should we move to the terminology of Russian criminals, where they use terms like bribed, sold out or such,” he said.

Tomas Balžekas , manager of 15min, one of the biggest news environments in Lithuania, and of the...

Hoax repeats – made up stories with children (1)