Artūras Dubonis | ldkistorija.lt
aA
The family in the 13th and 14th century Lithuania represented a unit in many senses, from economical and productive to social, organisational, and legal. The average family consisted of five or six people. The remains of a 14th century house in the lower town of Kernavė feature a plank-bed, made of several benches, up to three by 1.7 metres. Since the average human of the time was about 1.65 metres tall, the bed could accommodate the entire family of five to six people. On the other hand, the family also had a broader meaning, the one that covered two or three generations of relatives, such as fathers and mothers, grandfathers and grandmothers, as well as unmarried brothers and sisters. 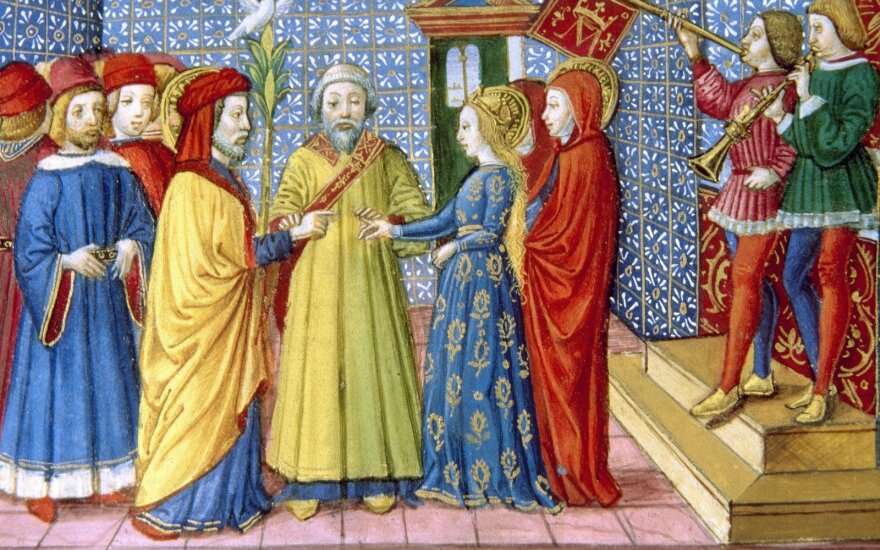 There were no strict differences between the smaller and the broader family as both of them had the same structure and carried out similar economic activity. There was no real-life motive why the larger family would split into several smaller ones because the broader family could more easily afford paying taxes and completing its duties against the ruler. On the other hand, it was the specific tradition of land and other property ownership and inheritance that would keep the broader family glued together. The different sizes of the 14th century houses, from nine square metres to 44 and even 68 square metres, point to the fact that the people of the time used to live both in smaller and broader families.

Related articles
Lithuanian watermills in the 15th and 16th century: a slow technological revolution
Smoking in the Grand Duchy of Lithuania

The pagan Balts, especially Prussians, were accused of polygamy by the Christians in the first half of the 13th century and later. The Lithuanian family, however, was monogamous. The Christian writers behind that kind of accusations could not understand or tolerate certain family customs, such as a pre-marriage payment to the bride's family, the so-called "purchase of a bride", easy divorce and an opportunity to arrange a new marriage, the acquisition of slaves to satisfy carnal desires, the custom of concubinage, and taking care of widows.

The Proprietary Bonds inside the Family

To create a new family, one would not pay much attention to emotions and feelings at the time. The family was a kind of property deal that would often mask broader proprietary, economic and social interests of a family. It was through marriages that families would "exchange" portions of their wealth, usually of equal value, in order not to incur a loss to either side: the bride's dowry would end up in the groom's family, while the groom's family would pay a certain marriage fee to the bride's family. The economic, social and military interests inside the smaller and larger families had for a long time been very close, hence the broader family would usually enjoy a control over the smaller family's possessions under certain circumstances. The broader family could restrict the smaller family's right to sell land and other property to outsiders and had certain rights to repossess the property that had earlier gone to other hands. If the last direct heir died, the family's property would be handed over to other relatives, sometimes quite distant.

In the epoch of the Grand Duchy of Lithuania, men enjoyed considerably wider rights of property management and inheritance compared to women, which clearly points to the fact that this type of customs had been taken over from the pagan times. It was only in the case of absence of brothers in the family that sisters could directly inherit their father's property. The mother's property, however, would be divided equally between all sons and daughters. A sister would get only a certain part, equal with her brothers, of her mother's land if her brother died childless. Before marriage, daughters would receive a quarter of their father's or brothers' movable property as their dowry. The allotment of the dowry, however, was not an obligation for the male part of the family. The dowry brought to her husband's home would entitle the bride to the possession of her own property if the husband allotted her personal possessions, usually a third of the husband's immovable property. This would subsequently become an object of inheritance for her children or, in their absence, for her relatives. A widow would manage the entire possessions of the family and fulfil the requirements of the military service until her children reached the age of adulthood. After that, she could still own a certain part of land from her personal possessions if it had not been assigned by her husband who had no legal obligation to do so. In that case, the dowry would become the husband's property. After becoming a widow, a woman had the right to marry again. In that case, she would repossess her dowry from the deceased husband's family. Without a legally binding will by her late husband, the widow would inherit a third of their mutual property with the remaining two thirds to be shared between their children on equal terms. A childless widow could earmark her possessions to anyone. Without the will, however, her property would be inherited by her and her husband's relatives on the equal terms.

The Head of the Family

The males have clearly dominated both smaller and broader families in Lithuania. That's the fact supported by a number of evidences, such as constrained rights on property possession for women, an undeniably preferred inheritance of movable and immovable property by men, and the relations inside the family that scholars are trying to recover, at least in fragments. The domination of the men is evident back in the first millennium. The anthropological analysis reveals that boys, even just several years of age, enjoyed greater regard in the society while after reaching the age of five to seven, they would leave their mothers and join the group of the contemporaries to start learning the manly skills. From the age of eleven to twelve, youngsters would take on the tasks of becoming men: warriors, farmers or leaders. They would undertake physical training. From the society's point of view, their skills were crucial for survival, hence the men would receive more care than girls. Young men would enjoy better living conditions. After reaching the age of 20, teenagers would become men and marry, usually with younger wives. They would give their first birth early, often at the age of 15, their first attempt often ending in death. That's why men would marry several times. If they had reached the age of 20, men would live several years longer than women. Injuries found on men's bones and joints clearly illustrate their role in the society. Many injuries, especially on right hands, are a result of wide hand motions, such as axing and other hand labour or throwing a spear. The back-bone lesions are related to hard field labour and cattle raising. From the second half of the first millennium, male traumas are becoming more frequent. About two-thirds of them were caused by violent conflicts between other families and societies. The social role of the men was becoming ever more important both in economic and military activity.

While young boys were meant to become warriors and breadwinners, girls were expected to be wives and mothers. Girls would take part in the daily house labour in order to gain basic skills. Women mostly worked in and around homes as the waist-zone lesions discovered by anthropologists reveal. Four to six attempts to give birth was a norm for women in the first millennium but only two or three children would reach adulthood. The ratio went up to three to four children out of six reaching adulthood in the 14th century. Babies and toddlers would be the ones deserving least care and attention in the family. They would usually be the first to be allowed to die not only in the times famine but also because of dire economic situation in the family, freakishness or defective overall appearance. Baby girls would be the very first in the line to be murdered. Both the Christian missionaries and the Church have been trying to fight the infanticide since the earliest days of christening of the Baltic lands.

The remarkable fact is that both men and women would begin to lose their social status after reaching the age of forty, if they managed to live that long at all.