Von Beate Klarsfeld, Benjamin Abtan
aA
In March 2016, Ms. Merkel and Mr. Erdogan reached an agreement on refugees, which would eventually involve all of Europe. Countless refugees, namely Syrians, were trying to reach Europe and in particular Germany, where public opinion slowly started to show signs of opposition to their reception. 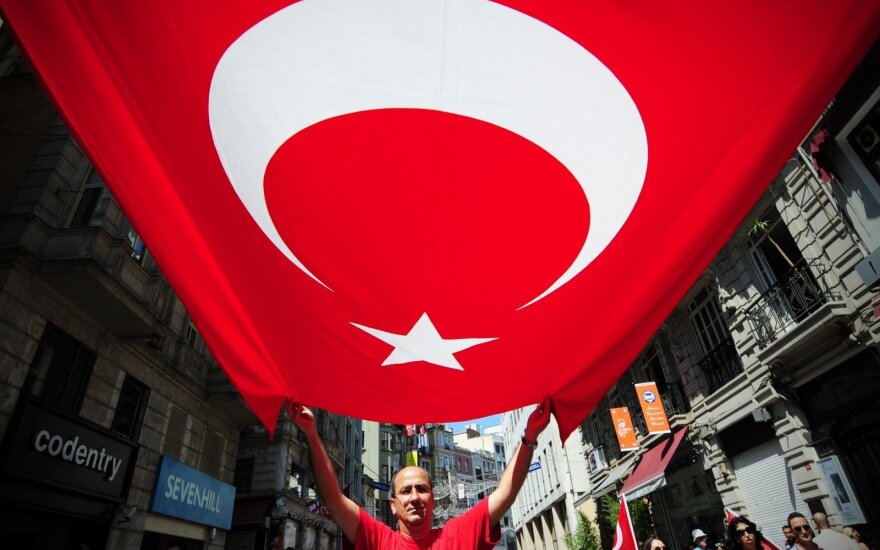 Flag of the Republic of Turkey
© AFP / Scanpix

This agreement, which is still in place, stipulates that Turkey must block refugees in exchange for billions of euros paid annually by Europe.

Let's make it clear: this agreement is useless; it is used by Mr. Erdogan to avoid European pressures as he puts in place an increasingly authoritarian power and fuels nationalism in Europe.

For these reasons, it must be destroyed.

First of all, it is useless.

Since March 2016, Europe has increased considerably the means of control of its borders.

In particular, the EU founded in October 2016 the European Border and Coast Guard Agency, in order to strengthen and better coordinate the control of its external borders. With a budget of more than 300 million euros for 2017, it has more than 400 employees, a rapid response force of 1,500 people, its own equipment and the authority to intervene on the EU's external borders in the event of a crisis.

Whether we want a more open or restrictive policy on the reception of migrants, today Europe depends very little on third States to put in place and have respected its political choices, and will be even less so in the near future. What is true for Turkey is also valid for other States, such as Sudan or Eritrea, which both have dictatorial regimes. To put it succinctly: we do not need them.

Above all, it is not Germany nor Europe that need Mr. Erdogan to prevent refugees from entering Europe. It is Mr. Erdogan that needs the refugees, located in the south-east of Turkey or "Turkish Kurdistan", to use them for his policy of oppression towards the Kurdish national movement.

In the short term, the presence of refugees in the south-east of Turkey allows to exert economic pressure on the Kurdish movement. Their undocumented work represents an indirect competition for the workers of the region. Moreover, it is mainly the Kurdish municipalities that have to provide the budget for the refugee camps.

In the medium and long term, their presence in this region will evoke a transformation of the electoral and political balance of power of the Kurdish movement, namely in favour of the AKP.

Indeed, once they have access to citizenship and therefore the right to vote, the Sunni population with their conservative values, who will have moreover acquired the citizenship through the AKP, will undoubtedly represent a strong electoral support for this party, transforming the balance of power in the ballot boxes in its favour, to the detriment of the Kurdish movement.

This explains why the Sunni refugees benefit from a better administrative status and better access to public services than others, especially the Yazidis, even though the latter are victims of a genocide.

This preferential administrative treatment today could represent the prefiguration of a privileged or even exclusive access to citizenship, and thus to the acquisition of the right to vote in the future.

The oppression of a national movement and the control of the territory through the transformation of the composition of the population is an old tradition of Turkish Nationalism.

This issue was also at the core of the Armenian genocide in 1915 as well as in the massacres and deportations of Dersim-Alevi in 1937-1938.

Welcoming individuals that are escaping war and death is, evidently, incomparable to mass crimes. Nevertheless, the reception of refugees and their settling in the south-east of the country by the Islamists of AKP is the continuation of a fatal tradition of Turkish Nationalism.

Furthermore, this agreement on refugees between Turkey, Germany and Europe allows Mr. Erdogan to blackmail Europeans and to violently put in place more and more authoritarian power structures, without having to fear pressures or sanctions.

Effectively, the repression against all those who are fighting for the promotion of human rights and democracy is increasing: activists, journalists, intellectuals, artists, lawyers, civil servants... Despite this, European pressures are minimal, and the very threats of sanctions are non-existent, even though they are likely to have powerful effects. The Turco-Russian crisis triggered by the shooting down of the Russian aircraft in November 2015 clearly confirms it: after Russia announced it would put in place economic and commercial pressures, which would particularly affect tourism, it took the Turkish president only a few months to apologize to Moscow and to change the tone and policy towards Russia significantly.

Given the strong links between Turkey and Europe, particularly in terms of economy, commerce and tourism, there should be no doubt about the effectiveness of European pressures.

Despite this, Europeans are determined to stay quiet and to not criticize Mr. Erdogan's authoritarian drift, as they fear undermining the agreement on refugees.

With a good diplomatic network and a perfect understanding of the weakness and fears of the Europeans, the Turkish president plays a dishonest game of poker and does it with high finesse. Far from his usual image as an irrational head of State.

He closed a pernicious trap on the Europeans: the absence of European pressures has allowed him to deploy with permissiveness his authoritarian project. In particular, he imposes censorship on the actions of the State, notably of the army, in the south-east of Turkey. This lack of information prevents Europeans from understanding with acuity his relationship of dependency with the refugees in this region. This miscomprehension which permits him to blackmail Europeans regarding the refugee issue and to prevent any possibility of sanction.

Hence, European democracies, of which Germany is at the forefront, show the incomprehension and weakness with regard to what might well be a dictatorial regime just in front of its door. This weakness contrasts with the demonstration of power of this regime. This contributes to the attraction exercised by authoritarian regimes to the detriment of liberal democratic systems, and thus fuels nationalism in Europe.

Implicitly this agreement is a sign of the lack of sovereignty of Europeans who are incapable of justifying their policies without the help of countries like Turkey. This is a key element in the nationalist and anti-European discourse which is only reinforced by the support of this deal. We can see here how the alliance between Islamism and Nationalism, Nationalism that AKP represent, and nationalism in Europe, are mutually reinforcing each other.

Therefore, the agreement with Turkey must be brought to an end.

This suppression must be also accompanied by European pressure to end the persecution of all those who are fighting for democracy and human rights in Turkey. The democrats demand sanctions against their country and the continuation of negotiation with the EU in order to Turkey falling into dictatorship. Let's hear and support their demands.

Germany had a determining role in the negotiation and conclusion of the refugee deal. It also carries a historical responsibility in the struggle against authoritarianism and promotion of democracy. It must therefore lead the way and end this agreement.

This is why we call out for citizens and political parties in Germany to take a clear stand in this direction.

What is at stake is the freedom and the lives of tens of thousands of democrats in Turkey. This is about the future of democracy, there as it is here.

Benjamin Abtan, President of the European Antiracist Movement – EGAM and Coordinator of the Elie Wiesel Network of Parliamentarians for the Prevention of Mass Atrocities and Genocides and Against Genocide Denial.

NOTE: The opinions expressed in this article are solely the authors' and do not represent those of EN.DELFI by the Lithuania Tribune or its staff.

Exceptionally few human decisions will lead to consequences measured in a dozen thousand or a hundred...

Lithuania and another 10 NATO members states, as well as Finland , which is not a member of the...