Andžej Pukšto,
BNS
aA
Posters on bus stops across Vilnius remind us that, this autumn, we are celebrating the 25th anniversary since most countries in the world resumed diplomatic relations with the Republic of Lithuania. The events will probably also celebrate the relations between Lithuania and Poland. Although there is little to celebrate: looking at the last five years, we must state that there has been considerable regress. 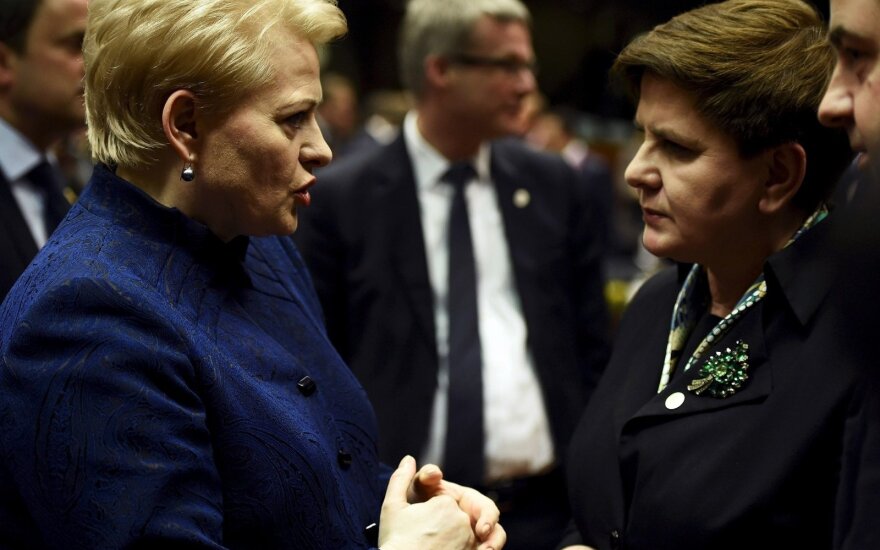 If anyone can celebrate, these are entrepreneurs, traders, people of sciences and arts. Over the last several years, a number of successful business projects have been implemented, joint Lithuanian-Polish companies set up, tourists are travelling in both directions in growing numbers.

Interestingly, Lithuanian and Polish historians have been working particularly closely. Ten years ago, Vytautas Magnus University in Kaunas even hosted a conference about "Middle Lithuania" and the policies of Jozef Pilsudski towards the Republic of Lithuania. Not a year goes by without a joint seminar or a co-authored book presentation in the Lithuanian History Institute in Vilnius or the Polish History Institute in Warsaw.

Stage people in both countries should be particularly proud of their achievements. The culmination of their cooperation is probably the invitation extended to Eimuntas Nekrošius to direct Adam Mickiewicz's "Dziady" at the National Theatre in Warsaw this year.

Unfortunately, the achievements of both countries' political elites do not come even close. There are none to speak of, to be exact. Optimistic predictions from last summer and autumn - that Poland's new conservative government and president might be pursuing more Lithuania-friendly policies - have failed to materialize.

There have been no visits by presidents, prime ministers, foreign ministers. Several years ago, the consulting committee of the two presidents suspended its work, as did the parliamentary assembly of the Polish Sejm and the Lithuanian Seimas, the two governments' cooperation council.

State-run companies PKN Orlen (Poland) and Lietuvos Geležinkeliai (Lithuanian Railways) are settling their disputes in various courts. The cooperation between Lithuanian and Polish national broadcasters could not be rekindled even by the new and very dangerous rounds of Russia's propaganda campaign.

Paradoxically, political leaders at both countries do not seem to regard this as any failure on their part; instead, both speak about the special role that Lithuania or Poland play in the European security architecture, how both are regional leaders.

One cannot fail to appreciate that the foreign policy vision of Poland's current government, run by the conservative Law and Justice party, is much closer to Lithuania's own than that of the former Civic Platform government. Firmer stance on Russia, more NATO and the US in Europe, strengthening coordination among Central and Eastern European countries - from the Baltic to the Adriatic - in defence, energy and politics, speaking in one voice in Brussels. All these points are perfectly aligned to Lithuania's own interests.

Poland's conservatives want to show their opponents that profound and unmistakable changes are brewing in their foreign policy. The successful NATO summit in Warsaw, close relations with David Cameron and, later, Theresa May, visits by President Andrzej Duda and PM Beata Szydlo to Berlin and Paris - all this attests to Poland's aspirations to play in the top league. The Visegrad group has also been revived lately. Warsaw has extended friendly gestures not just to Scandinavia, but to the Baltics as well, although only to Estonia and Latvia.

Poland's conservatives do not have a common position on relations with Lithuania. Essentially, there are two camps. One holds that furthering security requires cooperation despite all obstacles, since any neighbouring ally is important and necessary. The other camp believes that the interests of Lithuania's Polish speaking community cannot be sacrificed for the sake of good relations between Vilnius and Warsaw. The latter conservative camp has a slight lead among Poland's foreign policy makers.

When it comes to Lithuania's policy makers, one could not tell, even if one's life depended on it, who among the ruling Social Democrats or Labour Party members are pushing to solve the "Polish question" and who are impeding the rapprochement between Lithuanians and Poles.

President Dalia Grybauskaitė's position in this context is noteworthy. In the middle of President Bronoslaw Komorowski's term, the two leaders suspended their symbolic exchanges of visits on February 16 (Lithuania's independence day) and November 11 (Poland's independence day). We do not know on whose initiative this was done. President Grybauskaitė then only said that sometimes bilateral relations needed a break. That's it. Is this "break regime" continues under President Duda is quite unclear.

The notorious politician Valdemar Tomaševski quickly stepped in to make use of the political vacuum. On September 1 last year, he hired buses to bring teachers and pupils from Polish schools in Vilnius and Šalčininkai to attend a mass at the Gates of Dawn and protest alleged discrimination of Polish schools under Lithuania's education policies. Moreover, a member of Law and Justice, Marek Kuchcinski, came to support the rally. He was later elected the speaker of the Polish Sejm.

Tomaševski, mind you, keeps updating the "political menu" of his party, the Electoral Action of Poles in Lithuania. The party is running in October's elections together with some controversial figures from the Russian Alliance in its candidate list. That includes a former reporter of the Kremlin's television and a notorious former member of the Kremlin-supported Council of Russian Compatriots.

So in this autumnal political mist, as politicians and diplomats are raising glasses to celebrate the 25th anniversary of Lithuanian-Polish relations, one question remains: What's next between Vilnius and Warsaw?

After the parliament voted down the earlier initiative for a special foundation for development of...

Foreign Minister Linas Linkevicius on Tuesday is taking part in a meeting of foreign ministers of the...