Elmantas Meilus | ldkistorija.lt
In early 1648, a Cossack uprising led by Bogdan Chmelnitsky broke out in Polish-ruled Ukraine, which the country’s leaders did little to suppress. As was usual in the first half of the 17th century, the Grand Duchy of Lithuania did not keep a standing army, only garrison units in Smolensk and Daugpilis. Whenever the threat of war loomed, it had to form a new army from scratch each time, so the private armies of the nobles were always the first to go into war, and were only later joined by conscripts. 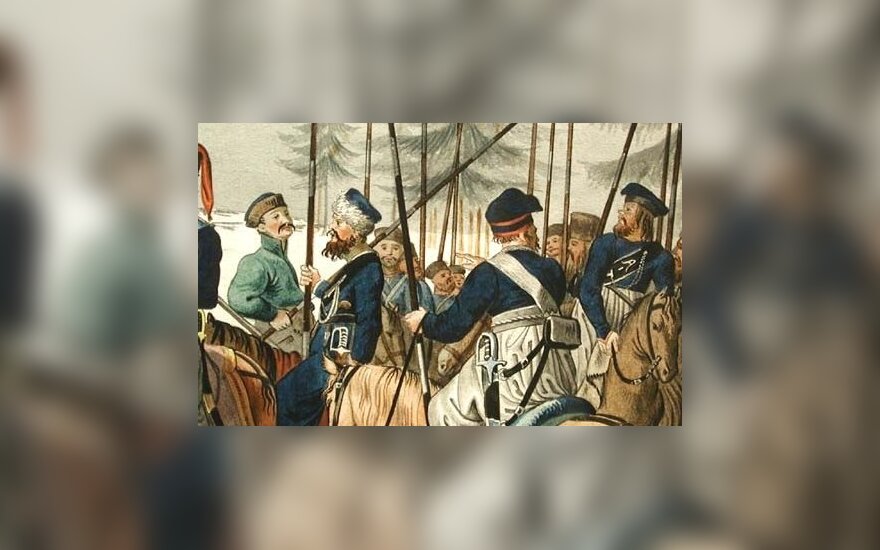 According to the historian Albertas Vijūkas-Kojalavičius, who lived at the time of these events, after the first successes by the rebels in Ukraine, the uprising spread to the eastern lands of the Grand Duchy of Lithuania thanks to the similarities in the religious (Orthodox) and national (Cossack and Belarusian) backgrounds of the rebels and the populations there. The rebels pushed their way into Belarus, where they gathered supporters. A few local nobles used their troops to hold them back along the line of the borders of the Grand Duchy and the Crown lands (roughly along the rivers Pripet and Dnieper).

Since attacking the grand duchy was only of secondary importance to Chmelnitsky, he encouraged unrest there by issuing proclamations to citizens of the grand duchy who were being called up into the army. His few proclamations were aimed at distracting Lithuanian forces, so that they would not go to the aid of the Poles in Ukraine. The Cossack leadership succeeded in this, for the scanty Lithuanian forces were almost unable to help the Poles, in the first two years of the uprising at least. Outbreaks of rebellion broke out in the grand duchy, and the struggle was vicious.

Nobles hired military troops privately in order to resist the first rebels along the country's southern border. Residents of the becalmed Bykhaw and Mahilyow districts supported the local gentry. Together with the gentry of the Orsha district, they defended the grand duchy's Padnieper region successfully, although it was difficult to fight against local peasants supporting the rebels who knew their way around the marshy and forested places.

The forested and marshy Podlesie area was especially convenient to the rebels, so they concentrated their efforts there. Jonušas Radvila, the field marshal of the Grand Duchy of Lithuania, began to assemble his army in order to counter them. This was difficult, due to the empty coffers, for, according to Vijūkas-Kojalavičius, no one wanted to fill the treasury from their own funds, as most wanted to do it from others. The local rebels, who for some time had not received any financial support from Chmelnitsky, were badly armed and badly paid. They looted and hid in marshes and forests in order to avoid confronting the Lithuanian troops.

In the autumn, after the defeat of the Polish regular army at Piliavcais, the rebels spread out along the River Pripet, devastated Brest, Kobrin and other border towns of the grand duchy, and confronted the forces of the grand duchy in several battles. They attacked towns along the River Dnieper again, and destroyed quite a few of them, but soon the troops of the nobles retaliated in several battles. They came to the aid of the local residents, and took several towns, several of which passed from the hands of one side to the other. But late in 1648 and early in 1649, the rebels were expelled from the parts of the grand duchy that lay along the River Dnieper, and at the beginning of October, an expeditionary force was sent from the grand duchy's army to retake the occupied towns along the Pripet. Pinsk was retaken after a bloody battle, and, for its treachery and its refusal to surrender, the town was destroyed and many inhabitants were executed.

In early 1649, fierce battles took place for Homyel and Mazyr, and other towns along the Pripet. Babruysk surrendered, although the Cossacks took refuge in towers in the city and tried to hold out, but they were killed or committed suicide. Nine captured rebel leaders were burnt at the stake, 40 Cossacks were beheaded, and 270 had their right hands cut off. The rebels abandoned Turov as the grand duchy's army was approaching. Eventually they were expelled from Polesie.

Hearing of these victories by Radvila, the rebels withdrew from other parts of the grand duchy: the way to Ukraine was open to the Lithuanians, but the Poles signed a truce with the Cossacks.

Fighting broke out again in the summer of 1649, and the grand duchy was overrun by large rebel forces. Bogdan Chmelnitsky sent his army to Loyew to strengthen the strategic post at the confluence of the rivers Dnieper and Sozh in an attempt to cut off the route of the Lithuanians to Kiev and elsewhere in Ukraine. The Lithuanians wanted to help the Poles: Jonušas Radvila made serious preparations to invade Ukraine, but his army was poorly equipped, and lacked food, gunpowder, money and artillery.

It was not possible to march to Ukraine, and in June and July of 1649, the rebellion broke out again on the left bank of the Pripet, in the district of Mstislavl, and in parts of the Smolensk, Orsha and Homyel areas. It was decided to march towards Kiev, defeating those dug in at Loyew on the way, and the Cossacks who were hurrying to help them. The Cossacks were defeated in a battle near Loyew on 31 July, and hostilities ceased for the time being, thanks to a truce signed with the Cossacks at Zborov.

The year 1650 passed quietly for the Lithuanian army, which concentrated on paying off its debts for service. Hostilites recommenced the next year in the spring. At the end of March, almost 14,000 soldiers had been assembled under the flags of their districts; they did not want to withdraw behind the borders of their areas, claiming that they had to defend their lands.

On 6 July, another battle took place at Loyew, at which the rebel army tried to cut off the road to Kiev, but it was defeated. The Lithuanian army approached the Ukrainian capital, and on 4 August the Cossack troops that were defending it withdrew from the town, persuaded to do so by the frightened inhabitants. A large part of the town was burnt down, and it was plundered. On 23 September, the army of the Kingdom of Poland and the Grand Duchy of Lithuania encountered the rebel army of Bogdan Chmelnitsky and the Tartars at Belaya Tserkov, and the Lithuanians and Poles routed them. They hesitated to attack well-fortified rebel camps, so on 29 September they signed a new treaty with the Cossacks.

Although the war resumed in Ukraine the next year, the army of the Grand Duchy of Lithuania did not take part in military activity (only the troops of individual Lithuanian nobles participated in operations with the Poles in Ukraine), and simply protected the borders of the grand duchy until the beginning of the attack by Muscovy in 1654.