The big 3 Parties after the ELECTIONS – scenarios 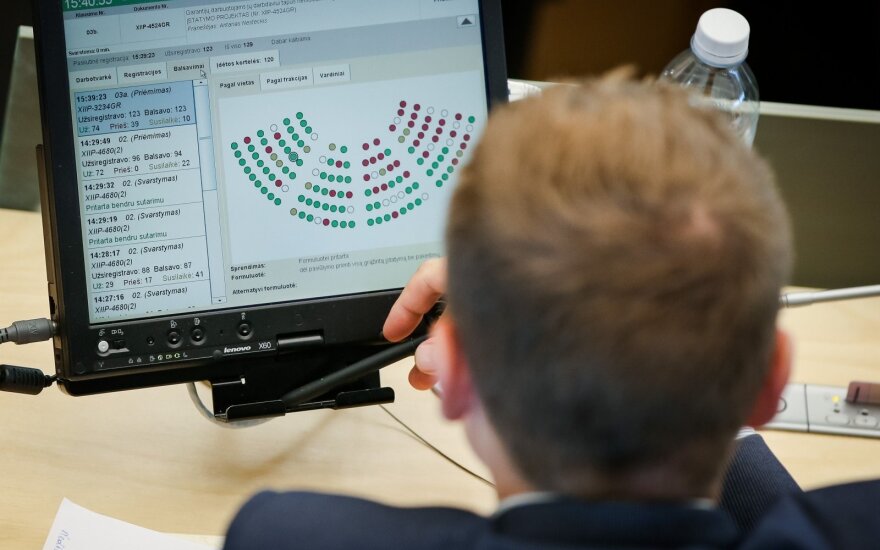 Politicians are eagerly awaiting the elections and keep repeating that regarding the coalition they will only count their chickens when they hatch. That is not quite reflective of reality. All participants in the political process can clearly see that the coalition will be built around the interactions of the currently three most popular parties – the Lithuanian Social Democrat Party (LSDP), the Lithuanian Peasant and Greens Union (LVŽS) and the Homeland Union – Lithuanian Christian Democrats (TS-LKD). And for now it is the newcomers, the “Peasants” who have the most cards in their hand with both older political powers courting them for a future coalition.

The LVŽS may have some friction internally due to this with electoral roll first number Saulius Skvernelis leaning toward the LSDP, while the party Chairman Ramūnas Karbauskis is more inclined to the TS-LKD.

Nevertheless, the LSDP is in the most precarious position. Its leader, PM Algirdas Butkevičius has a very poor relationship with the President Dalia Grybauskaitė, which would make coalition building tough. At the same time he remains the most popular party member, with ratings exceeding the President herself at times until recently. That said Butkevičius has stated that he would resign if his party gets fewer mandates in this election as compared to that of 2012. According to Vytautas Magnus University (VDU) professor Algis Krupavičius this may very well happen.

Furthermore the LVŽS does not belong to Skvernelis which somewhat negates his influence in pushing his party toward the left. The LSDP does not give up hope, with a member noting that similarly to the 2000 elections the initial coalition can simply end up falling apart and as in 2000 the LSDP could return into power following that.

The LSDP remains as the most popular party in the country, with the latest ratings suggesting they could earn as much as 16% of the vote in October. It is not in a simple position however. Being in power leaves it open to criticism, furthermore even party members have to admit that ratings are, in the end, highly mutable.

To make things worse, the party is reeling from a number of scandals, such as the Vijūnėlė scandal or “golden fork” scandal, as well as the party’s controversial support for the new Labour Code.”I also get the feeling that their ratings are mutable, unearned. Of course this could be related to inertia. For example when the Vakarinės Naujienos [Evening News] newspaper ceased printing in Lithuania, people still “read” it for another decade. This is similar,” points out public opinion and market research company Vilmorus Director Vladas Gaidys.

He also notes that the party is disadvantaged by its voter base being the oldest among major parties, surpassing even the Conservatives in this regard. Gaidys notes that this month the TS-LKD will have more youth voting for it than old generation. Another disadvantage he observes is that according to a February poll 55% of its voters will “definitely” come to vote. This is not a bad figure, but for example the Conservative electorate is far more active in this regard.

There are a few different outcomes that can be seen for now:

• A potential victory in the election, but failure to build a coalition government. Instead a coalition between TS-LKD and LVŽS could form.

• A potential victory in the election and coalition with the LVŽS (and perhaps the Liberal Movement), but without Butkevičius (if the President strongly opposes his presence) as PM.

• A potential victory in the election and formed coalition. Furthermore the President is convinced to allow Butkevičius to remain as PM.

• A potential loss in the elections, but forms a coalition later. Either because the TS-LKD – LVŽS coalition falls apart or the LVŽS itself splinters.

• A potential loss in the elections and work in the opposition. This would likely trigger a re-election of party Chairman.

The TS-LKD has had a very static rating recently with little change, hovering at around 9-10% popularity. A. Krupavičius observes a failure of attracting new voters and reliance on current supporters. For example the party has failed to siphon the voters abandoning the Liberal Movement after their major scandal.

Nevertheless the party is in a strong position. First of all it has a very active electorate, it is likely that up to 71% of its supporters will show up at the elections. This combines well with the likely low voter turnout this year due to people being disappointed in the political system after a chain of scandals this year. Furthermore their electorate is increasingly younger.

Nevertheless some of their stated goals will be tough to achieve with the party pushing for its Chairman Gabrielius Landsbergis to become PM, which could be a tough sell due to his lack of politics experience. V. Gaidys also observes that overall the three parties are fairly equally matched right now.

Sociologist V. Gaidys is fairly convinced with the LVŽS’ ratings, which have been hovering at around 12-13%. The expert observes the party accruing both some of the protest vote as well as part of the novelty vote. The protest vote is shared with Naglis Puteikis and Kristupas Krivickas’ Coalition, who are likely to obtain more from this niche, but still need to pass the 7% vote barrier for coalitions.

“This year’s situation is unique in that a major part of society continues to feel dissatisfied with the Conservatives and it is already dissatisfied with the Social Democrats. It could be that people are seeking who to vote for instead and third party candidates could become more appealing. I would not be surprised if “Peasant” candidates do well in the single-mandate electoral districts,” noted VDU professor A. Krupavičius, pointing out that usually new parties struggle in such districts, despite their overall popularity.

The LVŽS is the most likely to be part of a coalition, with it being able to mesh well with both the Conservatives and the Social Democrats.

Unfortunately its candidates for PM are rather weak, with S. Skvernelis, who is pegged to be shadow PM not expressing overly much eagerness for the task. The politician has not quite mastered English and just recently had a birth in the family. That said the Peasant Greens would likely be fairly willing to have a non-partisan candidate for PM which makes for a good opportunity to allow the Presidential Palace to demonstrate initiative.

“Rainbow” coalition
The Chairman of the LVŽS has offered an alternative suggestion of bringing the three major parties into a so-called “rainbow” coalition. This is something the President could get behind. ISM Management and Economics University lecturer Vincentas Vobolevičius finds this to be a bad idea, however. He notes that such coalitions usually occur after bad events such as war or other difficult circumstances.

“If it were possible to build a stable coalition with fewer candidates or with a more modest third brother than the “Peasants”, then it would be doable,” said V. Vobolevičius, stressing that the big three would struggle to agree on posts in the ministerial cabinet, which is typically the most important object of negotiations. Instead the expert believes that if the Liberal Movement manages to pass the 5% vote barrier, it will likely be a part of a coalition with the “Peasants” and either the TS-LKD or the LSDP. He noted that in the end the optimal outcome is as compact a coalition as possible.

ELECTIONS. The most likely coalition governments after elections