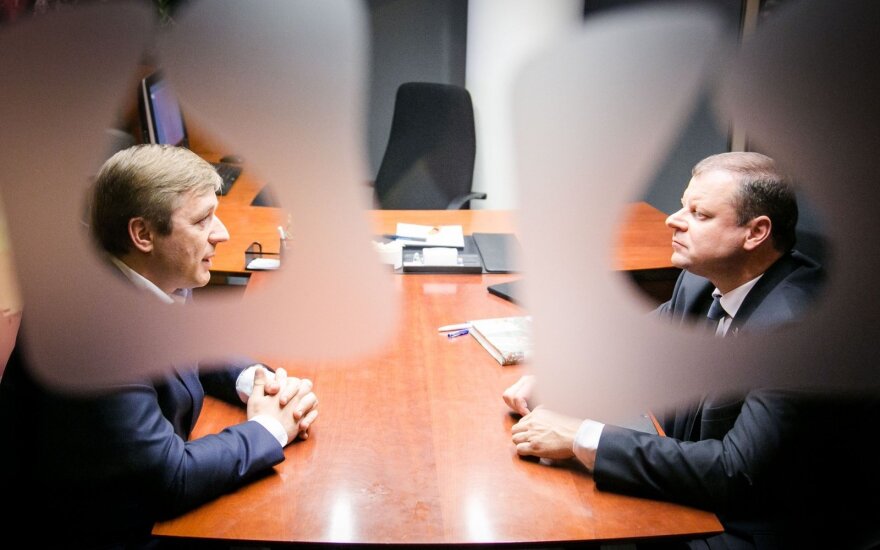 With Seimas beginning a new season of work, it will finally be clear whether Saulius Skvernelis’ cabinet is capable of accomplishing the reforms it promised. For now doubts are cast not only by the lack of specifics provided by the cabinet on reforms, but also disagreements inside the Lithuanian Farmer and Greens Union (LVŽS) and Lithuanian Social Democrat Party (LSDP) coalition, as well as “Farmer” leader Ramūnas Karbauskis’ failed attempts to excuse his colleagues.
The past cabinets of Conservative Andrius Kubilius and Social Democrat Algirdas Butkevičius have shown that they can last both during a time of economic hardship and unpopular reform, as well as a time of economic stability and passive policy. Will the new cabinet and majority also last the full four year term, alfa.lt asks?

Related articles
Survey: new ratings are unfavourable for not only Karbauskis
PM pledges to raise pensions, if economy grows

Kubilius saved by the crisis, Butkevičius – by Uspaskich and Paksas

A. Kubilius‘ majority was the first after the re-establishment of independence to last its full year term. While at the time the country was struck with financial crisis, the government made unpopular decisions and there was a riot next to the Seimas, the opposition did not rush into power at the time because it benefitted more from waiting for the economic downturn to end and the government‘s ratings to fall.

Meanwhile the Butkevičius government which ended its term last year did not even face any major challenges. The coalition headed by the Social Democrats was formed with the Labour Party and Order and Justice, who both lost popularity in the second half of term and strove to maintain the posts they had obtained at all cost. Withdrawal from the coalition would have been disastrous for both the Labourites and Order and Justice, something reaffirmed by the 2016 Seimas elections.
The “Farmers” are in a somewhat different position. No economic hardship is expected for Lithuania in the near future, which means opposition parties will not be deterred from seeking power. Meanwhile their coalition partners, the Social Democrats are unlike the Labour Party and Order and Justice, the favourites in the SocDem’s chairman election Mindaugas Sinkevičius and Gintautas Paluckas have both mentioned intentions of renegotiating the coalition agreement.

What could lead to Karbauskis and Skvernelis’ fall?

R. Karbauskis’ majority and S. Skvernelis’ cabinet’s fall may be hastened by at least a few factors.
Firstly the cabinet would need to be reauthorized by Seimas if it had to change more than half of its ministers. Reauthorisation will be needed after the 2019 presidential election, but up to then there is still a 2.5 year period for the opposition to try its luck in interpellating S. Skvernelis’ ministers. This could happen if the cabinet attempts the reforms it promised, but fails to. On the other hand, even under such circumstances, the authorisation is provided by Seimas, so matters would depend on the political circumstances in it then.

The cabinet and coalition’s work would also be extremely hampered by a Social Democrat withdrawal from the coalition or a fracturing of the “Farmer” Seimas group of sixty parliamentarians. The two factors are related, with a SocDem withdrawal from the coalition, faith in R. Karbauskis’ capacity to maintain authority would wane and members of Seimas would start seeking a safer bet. In reverse, if the “Farmer” group fractures, the SocDems could begin reconsidering remaining in the coalition.

A conflict between R. Karbauskis and S. Skvernelis could also dismantle the majority. For now they are heading two different axes of power, Karbauskis trying to rein in Seimas and S. Skvernelis in control of the cabinet. If Skvernelis chooses to turn away from Karbauskis to pursue greater political ambitions, such as the post of president or just a political career separate from the “Farmers”, it could lead to a conflict which would see Skvernelis’ supporters fleeing to other Seimas groups.

Political scientist – the first 100 days are most important

Political scientist Vincentas Vobolevičius explained to the Alfa.lt portal that the greatest threat to a cabinet and majority to be dismantled is over the first three months. He notes that a cabinet can never relax under parliamentary governance because there is always the chance of the cabinet being dissolved, but the first one hundred days are key because during them it is revealed who are the people interested in initiating reform and prepared to support the coalition; lacking support in the coalition they may look elsewhere.

The expert goes on to explain that after three months such risks decrease because those interested in specific change are either left satisfied or without sufficient strength to change the status quo. Nevertheless external shocks such as economic crises or geopolitical threats, as well as domestic issues between coalition partners can be used by actors interested in changing the status quo.
“This applies equally to democracies and dictatorships – everywhere after the formation of a new government, the first few months are decisive because during them it becomes clear how much important people are involved in government processes and how they react to them,” Vobolevičius explained.

Skvernelis‘ withdrawal would ruin his reputation

The political scientist believes that currently there are two factors that could dissolve the majority and cabinet. Fisrtly it would be clashes of opinion between the “Farmers” and the Social Democrats regarding reforms. Secondly it is important that the “Farmer” and Social Democrat electorates are similar, thus being in the latter’s shadow is harmful to the Social Democrats in the long run, which could prompt the SocDems to withdraw or for a number of its members to do so.

The coalition’s stability is maintained by two factors according to Vobolevičius – the “Farmer” Seimas group’s size and the members’ dependence on R. Karbauskis, as well as S. Skvernelis being unwilling to ruin his reputation.

“The “Farmer” group benefits from its members’ support for R. Karbauskis and the group itself being so large that there is little room for opportunism, at least while the party is at its peak popularity. For now they have no reason to not be the anchor of stability in Seimas.

Meanwhile S. Skvernelis’ position is optimal – he has support in Seimas, he is the Prime Minister and currently he could not win anything more. Even if he wanted to become president, in the short term withdrawing from the position of head of cabinet would only serve to diminish his chances because in the eyes of the people he would lose prestige,” Vobolevičius summarised.

Lithuania's Prime Minister Saulius Skvernelis has restated plans of raising pensions , if the...