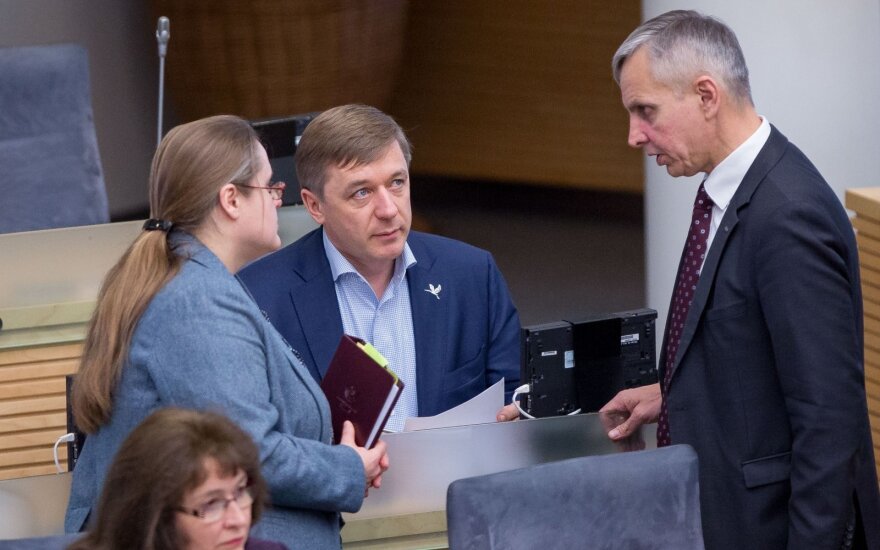 Povilas Urbšys, a member of Farmers and Greens political group in the Parliament spoke openly: a clear division of opinions can be seen in the group on various questions. However, in his opinion, the ones responsible for this is the Conservatives and the Prime Minister Saulius Skvernelis is bending to their influence.

According to P. Ušbšys, the conservatives at first were not pleased with the results of the second part of the Parliament elections and right after baptized S. Skvernelis as a reformer and Ramūnas Karbauskis – the opponent.

Related articles
Half of MPs propose bill to allow non-Lithuanian alphabet in personal documents  (1)
Skvernelis’ test for Karbauskis: signatures have already been gathered

“It would be pointless to look through rose coloured glasses and hide that the situation is serious, there is tension and there are differences amongst a part of the group and the leader of the Government. It is obvious” said P. Urbšys.

This member is stated as a close ally of Ramūnas Karbauskis, the leader of the Farmers and Greens group, who was the one to introduce S. Skvernelis and R. Karbauskis.

On Monday the Farmers and Greens talked about their relations in the Parliament but this did not help. On Tuesday morning S. Skvernelis and R. Karbauskis expressed different opinions on the stopping of emigration. In the afternoon the Prime Minister in the Government met with the leader of Homeland Union – Lithuanian Christian Democrats Gabrielius Landsbergis. P. Urbšys stated that this meeting seemed for show.

During elections the differences helped and now are in the way

The Member of Parliament said that during elections, the differences between R. Karbauskis and S. Skvernelis, alongside the dualism of party members and non-partisan professionals was an advantage. In other words, the voters could have picked Farmers and Greens but everyone saw what they wanted to see: ones the promoters of traditions and others specialists of a break through.
“During the election campaign it was an advantage, people wanted that the talks would be about the parties and not about their problems. This gave the result. However, at this time when talks are going on about what and how it should be done, tensions arise. One way or another, if we analyse the program of the party and the Government, it differs in some cases”, told P. Urbšys.

According to the Member of the Parliament, the Farmers and Greens program was oriented towards social sensitivity and the maintenance of the traditional values.

“Now we see that the environment of S. Skvernelis and his surroundings are more liberal when solving real problems and speaking about things like language, family, Istanbul conference, where social sex is mentioned” said P. Urbšys.

According to him, he does not find it suitable when S. Skvernelis says that a part of the Farmers and Greens political group is not ready for Government reforms.

“In reality that is not true”, said P. Urbšys while emphasizing that the group really want the desired reform results and how they should be achieved but there are differences.

S. Skvernelis demands not a political but a religious attitude?

P. Urbšys reminds that during elections there were talks that the influence should be returned to the Parliament and S. Skvernelis agreed to this. However, the Farmers and Greens now noticed that the Government is not ready to give back the ball to the Parliament.

Not the Government is the one doing the reforms, take responsibility and take the initiative. There is an impression that they want a no-critical view of the Governments initiatives. Practically, the Parliament should be the one to take things in a non-critical way. If it has doubts, it instantly becomes the opposition of the reforms. We have to agree that with this we demand not a political but a religious view: to believe everything for the Government and doubts make you a heretic. I don’t think that that this is fair. If we want a political dialogue, then we need a discussion” said P. Urbšys.

He gave the example of forest enterprise reform, when a part of the group raised a question at how right is it and won’t it be useful for the big business. P. Urbšys said that it is good to raise these questions and the Government made some corrections to the law, put in safeguards to ensure that people would not be fired on a mass scale.

There were talks in the Parliament that the difference of opinions regarding that is more related to the way that Members of Parliament are elected: most single-member opposed the reform, who have close relations to their municipalities and those who were elected from party lists – supported it more.

Another example given by P. Urbšys - the agreement for Vytautas Magnus University and University of Education to merge which was given by the Education and Science Committee led by Eugenijus Jovaiša, even though S. Skvernelis asked to wait for the opinion of working group of the Government. This group is preparing a project for reforming the whole higher education system.
However, P. Urbšys said that E. Jovaiša was the architect behind the education initiatives for the Farmers and Greens election program and formed the opinion that when initiating an education reform we need to base things not on quantitative data but qualitative: in other words first we have to look at university programs and then at the demand for the state and its regions.

According to the Parliament Member the merge is initiated in hopes to save a specialised preparation of educators, even though they admit that the Committee of education and Science may have rushed in advance of the Governments work group. Also, it does not miss a chance that this group has people who have ties to Vilnius University of Kaunas University of Technology.
“It is a difference of opinions that is simplified to a personal interest of E. Jovaiša this is simplification of the problem” explained P. Urbšys.

The blame is being put on the Conservatives just in case

The politician states the situation is explained by the actions of Homeland Union – Lithuanian Christian Democrats. In their view, the conservatives were displeased by election result from the start but that is understandable as the second part the Conservatives’ massively lost to the Farmers and Greens.

After the elections it appeared that they were in discussions for a coalition, but P. Urbšys said that the Conservatives picked a Farmers and Greens “disdain tactics”. In other words, they talked about possible ties between R. Karbauskis and Russia.

“We can now see that the tactics have changed and it is directed towards one thing: separate R. Karbauskis and S. Skvernelis by saying that the first wants reforms and the latter opposes them” said P. Urbšys.

When asked why he thinks that the Prime Minister agrees to this the Member of the Parliament said that he understood that from S. Skvernelis reaction to all the questions or doubts about Parliament suggestions: he would see everything as the suspension of the reforms.

“He does not look at himself critically” said P. Urbšys.

He also said that there are talks that G. Landsbergis has forbidden the political group to criticize S. Skvernelis, which would be unique as Conservatives stand out with their disobedience in the Parliament.

Skvernelis’ test for Karbauskis: signatures have already been gathered

Following disagreements among some of the members of the ruling political group of the Farmers and...