DELFI
aA
Contradictory views on what Germany’s position should be in relation to NATO and Russia in the Baltics surfaced last week ahead of today’s NATO summit but those contradictions may reflect domestic political concerns as much as divergent foreign policy positions. 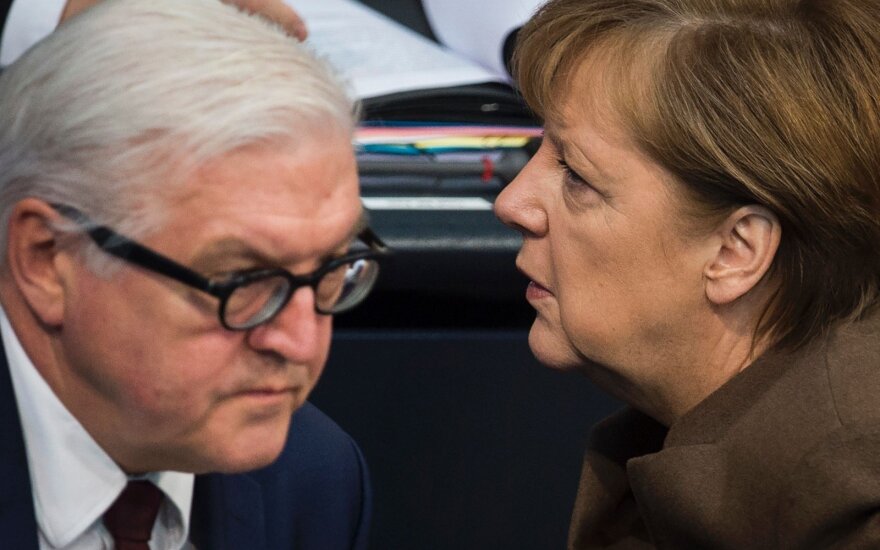 Before the NATO summit meeting in Warsaw, the Baltic States believe a clear message of determination should be sent to Moscow. However, Brexit has forced Europe's Eastern flanks to worry: with the loss of the UK, they have lost one of their most important allies in being critical of Russia, and Germany's Minister of Foreign Affairs Frank Walter Steinmeier's comments about Western warmongering created a political controversy at an inopportune moment.

Members of the German ruling coalition of Christian Democrats saw the Social democrat's words as advocacy for the Kremlin as the Social Democrats have been seen to be lobbying for a softer stance towards the Kremlin.

Minister Steinmeier received enthusiastic support from both extremes of the political spectrum – from the leftist Die Linke party, the right-wing populist AfD, and even the radical right-wing national democrats' party (NPD).

The controversy reignited an old question: what is Germany's position on Europe's security?

During the NATO summit meeting in Warsaw on July 7-8, the priorities to be discussed will include deterring Russia and the defence of the Alliance's eastern flank. In this context, the German minister's criticism of the Alliance's position towards Russia sounded strange – as if he represented not Berlin, but Moscow.

Russian media channels relished in quoting Steinmeier because, according to Friedricj Schmidt, the German newspaper FAZ's correspondent in Moscow, the German minister's words echoed the Kremlin's line of propaganda – that NATO is a spreading threat to Russia. Moscow dismisses NATO's eastern flank's worries of an aggressive Russia as “hysteria,” “Russophobia” and “an absurdity.”

Steinmeier's criticism of NATO sparked an angry response in Germany, especially from the Christian Democrats (CDU).

“In no way should Germany and the minister of foreign affairs raise any doubt as to what is the cause of the current tensions,” said the CDU parliamentary group's representative for foreign affairs. “Russia is rattling its sabres, not NATO.”

Peter Tuaber, the Secretary General of the CDU, said “Steinmeier confused the cause and the effect”. Numerous critics have said that the comments made it seem like Germany was advocating for the Kremlin.

Is Germany advocating for the Kremlin?

In an interview with German media, Steinmeier dismissed the criticism as a conscious attempt to discredit him and said that Germany's position on Russia's policies was no less critical than other countries. However, he stood by his idea that it would be a mistake to use only military means and to rely solely on deterrence policies.

“We need not less dialogue with Russia but more. We live in a conflicted world. But in NATO foreign minister meetings, it sometimes seems like Russia is our only remaining military enemy,” he said.

Other German Social Democrats have made similar statements. Gernot Erler, a Social Democrat and the government's Russia officer, said: “The decision to deploy forces and military operations on both sides is creating a situation, and this is dangerous. This can lead to uncontrollable situations that lead to war.”

Former chancellor Gerhard Schroder pointed out Germany's historical obligation to Russia: he believes that the fact that, on the 75th anniversary of the attack on the Soviet Union, Germany is assuming control of NATO forces on the Russian border belies a total lack of instinct.

It was strange, however, that Schroder associated Germany's obligation only with Russia, bypassing Poland and the Baltic states.

“When looking at history, we must as clearly as possible state that we stand with Poland and the Baltic states,” said Florian Hahn, the Christian Social Union's (CSU) foreign affairs spokesman.

Schroder is urging Germany to change Europe's policy towards Russia: instead of arming Eastern Europe and the Baltics with NATO, Berlin should do everything it can to improve its relationship with Russia.

Unrest in the ruling coalition – a split?

This position on the SPD's part is not surprising nor new. Even during the most politically difficult times, the Social Democrats have tried to maintain a good relationship with Moscow. “In a twin strategy of strengthening defence capabilities and dialogue with Russia, the SPD has always favoured dialogue first,” said Klaus Remme, a commentator at the Deutschlandfunk radio channel.

The Christian Democrats have not rejected dialogue, but they are careful to ensure that dialogue is not seen as obedience to Moscow – especially when “the Baltic states expect clear expressions of solidarity at the NATO summit meeting,” writes the Tagesspiegel newspaper.

“We have always been of one mind – that we must defend NATO's territory not just in theory, but in truth,” said Volker Bouffier, CDU member and minister of the German state of Hesse.

Steinmeier's comments have caused serious tensions in the large ruling coalition. Some have come to the conclusion that, in this way, the Social Democrats are seeking to separate themselves from their governmental partners, the CDU/CSY, and are preparing for a new coalition with the leftist Die Linke and Green parties.

Political scientists unanimously agree that, in a large coalition with a strong CDU leader in Chancellor Angela Merkel, the social democrats lost their political profile. This is part of their explanation for the party's unusually low poll ratings, which barely reach 20%.

However, the Tagesspiegel newspaper believes that the move to the left to recover some popularity is a risky move: “With the pro-Russian and Alliance-skeptical course, the SPD will win nothing. It will only become more similar not just to Die Linke, but to AfD as well. It will distance itself from the political centre. Polls show that 80% of Germans no longer see Russia as a partner. Many want higher defence expenditures.”

Unwelcome support from the far right

The Social Democrats probably did not appreciate the support they received from the far right. Alexander Gauland, one of the leaders of the populist AfD party, was quick to agree with the Minister for Foreign Affairs. He said that Russian deterrence didn't work and only served to provoke the country.

He also criticised the German army's participation in NATO's military exercises in Eastern Europe: “In such a tense situation, Germany should be sending balanced signals in all directions.”

The National Democratic Party (NPD) also expressed solidarity with Steinmeier. There is currently a process underway to dissolve the party due to unconstitutional actions on its part.

“Steinmeier is right: the policy of sanctions and escalation and 'sabre rattling' is turning Europe into a gunpowder barrel and threatens a cold war. You don't have to be a Putin sympathizer to understand that there the policy of surrounding Russia over many years, the thousands of NATO troops being deployed by Russia's borders, and the audacious military exercises that imagine Russia as a military enemy cannot be taken by Moscow as anything other than unacceptable provocation,” said NPD deputy chairman Ronny Zasowk.

Die Welt commentator Berthold Kohler offered a response to such commentators: “The four battalions that are to be deployed don't threaten Russia in any way, which has deployed two division on its side. Steinmeier is right to speak of “symbolic tank parades”. NATO divisions and their exercises have a political goal: to signal to Moscow that the West will not allow itself to be subjected to a surprise attack like Crimea and that an attack against one member of the NATO Alliance is an attack against all of them.”

In a recent article in Foreign Affairs entitled “Germany's New Global Role,” Steinmeier writes about the importance of diplomacy, saying that Germany, especially considering its history, should be prepared to go further than the Alliance in negotiations with Russia.

However, political scientist Oliver Weber noted that without the US, Germany's diplomacy and negotiation would not be enough to secure its interests. He called Germany a security policy user, not a creator.

"A little German diplomacy, negotiation, and goodwill is unlikely to be sufficient to defend themselves and to defend their interests. Again, it becomes clear: Germany continues to be a consumer of security policy, rather than a creator. "

However, Angela Merkel's statement had boosted confidence in Germany's commitment to its own security. After meeting with the head of Poland's government on Wednesday, Merkel announced that Germany would be increasing its defense spending to 2% of GDP, as suggested by NATO, rather than the 1.2% it had spent up until now.

With Great Britain seemingly set to leave the European Union, the weight on Germany to take on a key role in European Security will only increase.

The Kremlin is enjoying the discomfort that Brexit is causing to the European Union. But that does not...

Britain’s historic decision to leave the European Union has exposed big fault lines inside the bloc....