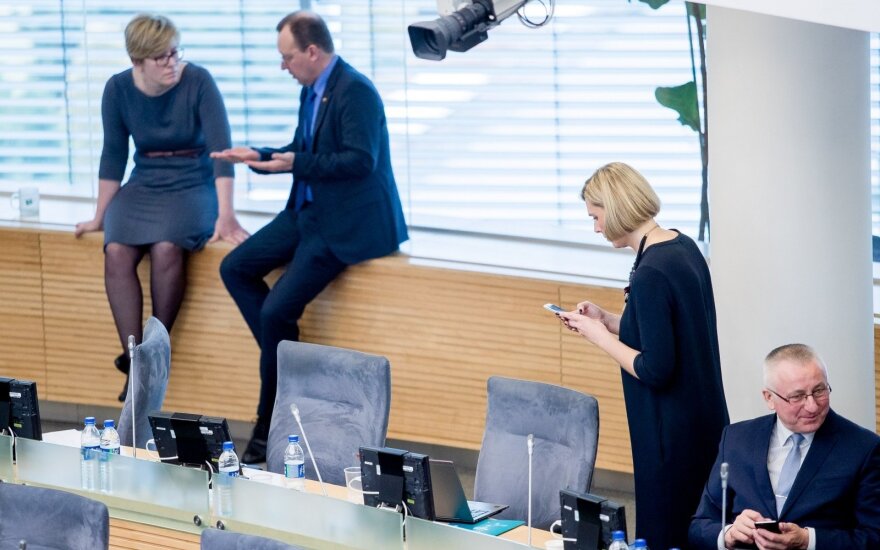 In the Seimas during a plenary session
© DELFI / Domantas Pipas

The Chairman of the Lithuanian Farmer and Greens Union (LVŽS) Ramūnas Karbauskis has some concerns. While his party is the most popular, its ratings are gradually slipping. Last December the party’s popularity reached a peak of 30.7%. The party’s January ratings had dropped to 26.5%, decreasing further to 21.9% in February according to a survey by public pollster company Spinter Tyrimai, commissioned by Delfi in February.

R. Karbauskis himself believes the drop in ratings is due to criticism and premature expectations for achievements. He explains that the Seimas spring session has begun and the expected actions will be made, which will improve ratings. The politician also adds that what the party is planning has not been done for twenty five years, albeit not specifying what sort of things are planned.

On the other hand Karbauskis has also said that there is agreement in Seimas and his party’s Seimas group that currently ratings should be completely disregarded in favour of doing work because there are no important elections up to 2019. This is despite his statements in January that all the critics of the new government will break their teeth because the public does not support them. When asked if he admits he was mistaken then, the politician refused to admit he was wrong, stressing that “No, I was not wrong. You can probably see the percentages, how the public views the news media.”

Farmer popularity on the decline

Based on the survey, R. Karbauskis’ Lithuanian Farmer and Greens Union remains the most popular, but this popularity has decreased by 4.6% over a month, with now 21.9% naming the “Farmers” as their party of choice if elections were to be held this coming weekend.

The next most popular party in Lithuania is the Homeland Union – Lithuanian Christian Democrats, who recently re-elected their Chairman Gabrielius Landsbergis for another term. 12.9% of respondents would vote for the Conservatives, a decrease of 0.5% since January.

Next are the Social Democrats who are poised for their own chairman election. They would receive support from 7.7% of respondents, losing 2.5% popularity since January.

Remigijus Šimašius‘ Liberal Movement remains at the now traditional fourth place, with support from 6.4% of respondents, an increase of 0.3% over the previous month.

The remaining parties would fail to exceed the 5% barrier applied in the multi-mandate electoral district. The Electoral Action of Poles in Lithuania – Christian Families Union would earn 3.9% of the vote, Order and Justice – 3.1% and the Lithuanian Green Party – 2.6%.

Mykolas Romeris University political scientist Rima Urbonaitė states that on one hand the Farmer and Greens’ ratings are nearing the typical boundaries of majority parties, on the other hand they reflect the fact that the new government has not demonstrated what good it intends to achieve over its term. In essence she summarises the situation appears to be a gradual return to form after the “Farmer’s” disruption of typical political proceedings.

The expert highlights two factors to the 8.8% ratings decrease throughout the past two months – R. Karbauskis’ war with the media and the lack of clarity on the government’s goals. She notes that continued communications mistakes and lack of content will accelerate the decline of the party’s ratings; voters gave the party a credit of trust, but the moment when content – specific actions, goals and plans are demanded is nearing. Lacking these or if they are of poor quality, things may turn far worse.

The scandal revolving around Greta Kildišienė also has an impact. While the former member of Seimas withdrew, it is still unclear what finances she lived off of given her declared income of 4367 euro over 2015, with it also being somewhat unclear how the 100 euro monthly lease for the infamous Range Rover was paid.

R. Urbonaitė notes that such events have made people not noted for their blind or irrational trust. R. Karbauskis’ peculiar war against the media, where he presented no proof, only complained about being attacked and the government’s lack of a specific plan up to the point the survey was performed also contributed to the drop in ratings.

With decreasing “Farmer” popularity, the ratings of Prime Minister Saulius Skvernelis have somewhat lessened as well, even if the politician remains vastly popular.

36.8% of survey respondents find him to be the most suited for the post of Prime Minister. His popularity has decreased 3.1% over the past month, however he is still far more popular than former PM Algirdas Butkevičius was at the start of his term in 2013.

Another 9.6% of respondents see Homeland Union – Lithuanian Christian Democrat Chairman Gabrielius Landsbergis as the most suited for the post of PM. His ratings have risen 1.8% over the past month.

A. Butkevičius has also maintained some support, with 4.1% of respondents finding him to be the most suited for the post. This is a decrease of 0.9% since January.

Based on the survey, the month also led to a decrease of cabinet ratings. From a positive reception of 45.8% in January, the cabinet is viewed positively by 38.6% of respondents after February.
Negative or likely negative evaluations reached 40% in January, while in February they reached 49.1%.

While the Liberals flounder, the Conservatives seek to get rid of entrenched stigma