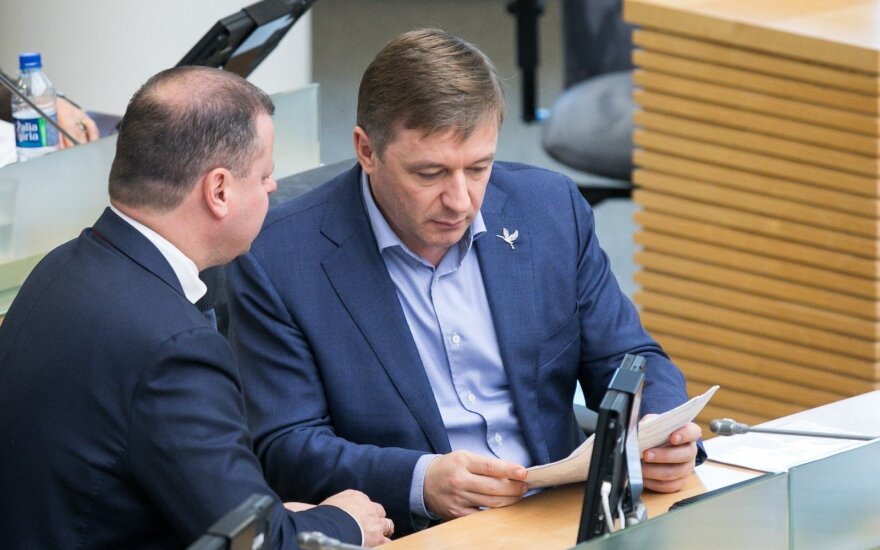 Social issues and tax policy are the two areas portrayed as priorities by the majority, with the most attention dedicated to them. There is talk about children's money, other social benefits, also regarding wage increases expected after tax reform. However according to a Spinter Tyrimai survey commissioned by Delfi, people are not inclined to view the government's work in these areas positively. Evaluations of the Seimas and cabinet are not especially positive either.

Respondents were asked to give the work of the two institutions a score. Based on this, the Seimas' work was evaluated on a ten point scale at 4.62 points, the Seimas' decisions in social policy were rated 4.67 and in tax policy – 4.45. Overall, the Seimas' work and its decisions were typically more favourably received by women, the youngest respondents (18-25 years old), however the latter often did not have an opinion at all, also secondary educated citizens, residents of regional centres.

Meanwhile, the cabinet's evaluation is a little higher – respondents rated this institution's work at 5.09 points, decisions in social policy were rated at 4.85 points, while tax policy – 4.49 points. The most favourable ratings of the cabinet's work and decisions were typically from respondents aged 26-45, middle income representatives, typically from regional centres and rural areas.

Mykolas Romeris University (MRU) political scientist Rima Urbonaitė believes that it would be naïve to hope that both the Seimas and cabinet's work would be evaluated positively.

"We cannot say that there is a large difference between perceptions of the Seimas and the cabinet. You certainly cannot call this Seimas humble, we see many ideas from the cabinet, but also in the Seimas. This Seimas is certainly not passive, of course, it is all overshadowed by internal bickering, but the agendas are rather intensive after all. Thus people see the cabinet and Seimas somewhat working in tandem. (...) There isn't a massive distance between these two institutions," the political scientist believes.

According to R. Urbonaitė, there may be a simple explanation of why women receive the current Seimas better than men – we can see that the Seimas is mostly dealing with social security, education and children's rights questions, which are typically relevant to specifically women.

"There are many initiatives in Seimas, but implementing the initiatives is another matter. When you pass a law, you already see, what will be laid out in it and the cabinet must clearly show, how it will be done. If there are questions and doubts, whether it will work out, there must be discussion on this and the professionalism of MPs comes into play here. Activity for the sake of activity is not good, we must look to the results," the political scientist says.

Regarding the Seimas' evaluation results, Vilnius University (VU) Department of Communications Digital Media Lab head Andrius Šuminas stated that it is hard to tell much from the results because it is unclear, what the respondents are thinking when answering, how they rate the Seimas' work.

"The Seimas' ratings were never high and the Seimas is an institution, where it is not very clear, what exactly people are rating. There is so much in it. Are people rating the majority's good work or the opposition's? More detailed questions are needed for clarity," the expert says.

According to A. Šuminas, in terms of ratings for specific policy areas, the answers could have been decided by the questions themselves.

"On one hand, taxes are viewed as a sort of "evil" here and if you can evade taxes in Lithuania, it is taken as a sign of cunning and wisdom, while if you do pay taxes, you are almost taken for a fool. This is a problem of public maturity. But on the other hand, for common people, tax reforms and tax policy are very distant and hard to understand matters," the communications expert says.

According to him, if people receive tangible matters such as children's money, they can then decide, however in some cases they cannot associate that it is a consequence of tax policy.

"The cabinet faces much criticism from various interest groups, this criticism pours on, a discussion is not even really proceeding so much as criticism and retorting from the cabinet. And once again, the image arises that the cabinet is being attacked here and the prime minister has nothing left to say that yes, we are working, but we get attacked," A. Šuminas believes.

According to him, people often simply do not understand the essence of specific policies, thus they are inclined to rate them lower.

In terms of the tax policy rating, R. Urbonaitė highlighted an earlier survey, from which it was clear that many people simply do not understand it. Thus, according to her, a clearer image should be available at the start of next year when people really experience the tax policy changes.

"Many did not understand the tax policy, especially the "Farmer" voters. This is because those, who have higher education, read more, evaluated further, what changes were made. I believe that a more objective people's stance will be available already from the start of January. (...) There is a lack of messages, which would be easily understandable and people have yet to feel that there has been some sort of major improvement, hence the modest ratings," the MRU political scientist says.

She notes that the somewhat poor Seimas and cabinet work ratings could also be linked to heightened expectations.

Skvernelis' fight with prices may burn his ratings

Lithuania's government plans to collect around 200 million euros in revenue from the shadow economy...

Širinskienė speaks of red lines: politics is the art of dialogue, but I would not forgive Karbauskis for such things