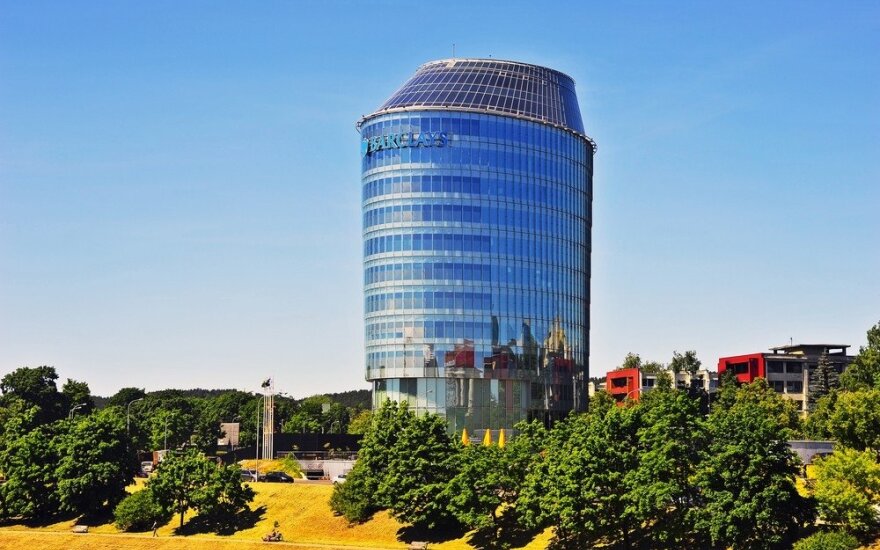 Mobility is a natural trait of the service sector, thus the UK bank Barclays decision to cut the staff count in its technology centre should not be dramatized, economist Gitanas Nausėda told lrt.lt, adding that a bad sign would be the withdrawal of manufacturing investment. "I am more concerned by a drought in our jobs market when investment will cease not due to excessively high wages, but due to radical market measures preventing access to suitable personnel," he spoke on future risks.

The SEB bank president's advisor noted that service centres are a highly mobile business form, which upon changes in circumstance, can quickly migrate to other countries and return again.

"It would appear that the growth of average wages and the opportunities to find suitable employees in the market are the factors, which could change our competitive opportunities. I would suggest to not dramatize it because first of all it is Lithuania moving forward – wages are growing, we should be happy about it. And if certain centres choose to withdraw because of it, I do not believe that the staff, who are in demand on the market, will struggle to find an equivalent job.

As such, it was unnecessary to react so exaggeratedly to the arrival of the service centres and say that the eight miracle of the world occurred in Lithuania. Equally, with them reducing their capacities, we should not come to overly grim conclusions," the economist assured.

The expert noted that Barclays may not be the only company considering a reduction in its staff count or transfers, however fundamental problems would be signalled by the movement of more sedentary businesses.

"Other movements are possible in the service centre sector as well, someone could also think about reducing or transferring its workforce. But it is a natural trait of the sector – it invests little, thus it does not get attached to a location. On the other hand, this sector is expenses oriented, thus very mobile.

When less mobile businesses begin moving, you can start saying that some fundamental shifts have happened and can look, whether the country's investment appeal, business conditions have not deteriorated," G. Nausėda said.

Prime Minister Saulius Skvernelis told lrt.lt that while the decision by Barclays is not good news, the demand for IT specialists in Lithuania is large and will only increase due to the plans of other service centres entering Lithuania.

Alongside its announcement about job cuts, Barclays has already announced that this decision is not linked with the investment environment in Lithuania. Of course, the company's decision is not good news, however the demand for IT specialists in Lithuania is very large and I have no doubt that these highly qualified specialists will soon find new jobs in other companies operating in our country," Prime Minister Saulius Skvernelis told lrt.lt.

Based on Invest Lithuania data, from 2009 when Barclays entered Lithuania, another 50 service centres were founded in the country. Investors such as Booking.com, Centric, NKT and Telia, who will also be entering the country soon, are expected to create over 3 thousand jobs.

According to Invest Lithuania, at the end of 2017, there were 71 service centres in the country and last year another 16 new projects or expansions were announced, leading to an expected 2.6 thousand jobs being created. Western Union, Danske Bank, Nasdaq tech centres currently operate in Vilnius alongside the Swedbank non-financial service centre, as well as other foreign companies' IT and service centres.

With the news surfacing that Barclays is planning a reduction in its staff in Lithuania, a discussion was sparked on social media that Lithuania should perhaps position itself not as a service centre, but high tech production country. However, G. Nausėda is convinced that "we should seek to catch all the fish swimming around."

"However, certain investors, who come here, have reviewed the situation well and know where they are entering. They know that they will find qualified staff here, however equally they know that they will no longer be as affordable as 10-15 years ago. However, the flood of manufacturing investment into our industrial parks and free economic zones is a sign that potential is seen here.

I am less concerned over wage growth – under current conditions it is a completely natural process more concerned by a drought in our jobs market when investment will cease not due to excessively high wages, but due to radical market measures preventing access to suitable personnel," G. Nausėda said.

First Clarion hotel to be opened in Vilnius (1)

International hotel chain Clarion plans to settle in a building being developed by investment...