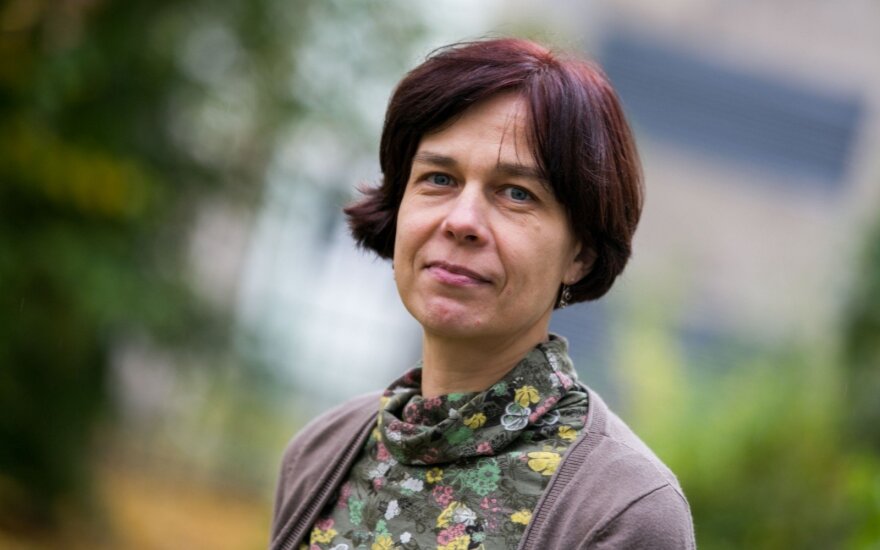 If in independent Lithuania the Soviet nomenclature had been prohibited from occupying positions of authority, we'd be talking about the government in a completely different way. That's what philosopher, writer and public figure Nerija Putinaitė told LRT Radio. She agrees that hardly any former nomenclature believed in the ideas of communism but they did believe in their careers and connections and that the clans that made up the system would create good conditions for themselves and their families.

You've written several books about the search for a Lithuanian national identity. What was the identity of Soviet Lithuania? What are the crucial changes taking place today?

Related articles
“National conscience” Marcinkevičius stirs emotions, national debate from beyond the grave
Lithuanian culture minister: We must defend our identity, not only territory  (1)

In Soviet Lithuania very specific relationships formed with the government and the state as did a very specific type of nationality and the understanding thereof. In talking about a specific relationship with the government and state, I mean that the Lithuanian nomenclature made decisions on lots of things. It did indeed carry out Moscow's orders and was its tool but it did have quite a lot of freedom to decide not only on what to build but also how to suppress and what to suppress. Nevertheless, even though they were national, Lithuanian communists they managed to nurture an understanding that the chief evil originated from Moscow.

That was felt very much during the Sąjūdis coup when Algirdas Brazauskas, who was in actual fact a tool of the totalitarian regime, was able to appear to the people as their leader. He managed to rid the hatred the people had for the regime from the Lithuanian communist nomenclature and transfer it to Moscow. What happened to the Lithuanian communists was one whole hoax that was defined by the relationship with the powers that were.

Even during perestroika for example Russian dissidents would say that there were all sorts of debates to the effect that the national social movements did not in actual fact talk of democratic and anti-totalitarian values but rather of national values. We spoke of national values accepting Mr. Brazauskas and others as national communists already at the start of independence when the state was being created; we back staged those democratic values and the perception that we had to build a state on other non-totalitarian foundations and other governmental and social relationships.

Although Vytautas Landsbergis was always emphasising that there had to be democratic values and that the state had to be created by the people, it seems to me that at the beginning of the state the perception was that we were getting rid of the "Russian yoke" and becoming an independent state. Yet very little was said and understood about the fact that the state and its foundations must be non-authoritarian and non-totalitarian. That's why the communist administration and way of thinking remained in its posts. Everything stayed as it was namely because of a clash in values and structure.

And we hadn't even started thinking differently; we were still thinking in terms of the national paradigm that Lithuanians will not surrender to the Russians. Although, looking back at the democratic paradigm, we have to ask what values are important to us; is there a specific action and a way that we ourselves behave that complies with those values. There's lots of debate taking place but transformation is very slow.

There is sometimes the impression that there are former Soviet nomenclaturists in power. There are their children and wives who knew each other before and now have become the ruling clique. So what we still have now is an independent Soviet Lithuania.

That's a very radical thing to say but the problem is that the former administration (ministries and other governmental systems) consequently moved over into independent Lithuania. I think that it would be a massive act of de-sovietisation if the nomenclaturists were prohibited from occupying positions of authority. Let's suppose that they were permitted to work as specialists but prohibited from taking up leadership positions in ministries and departments; the break would be huge and we'd be talking about state governance in a completely different way.

Why? They probably have experience but their mentality has been shaped and their relationships and clans have not been dissolved. Algirdas Brazauskas was a very important persona for these clans because it was by way of political wisdom that he managed to move the communists over to an independent Lithuania with practically no casualties and adapt them or more precisely adapt independent Lithuania to the communists. This is why he is an important figure to many of those people who depended on his political dexterity

There were hardly any idealistic communists in Lithuania, maybe one or two – and that's very misleading. The former nomenclaturists say that they did not believe in the ideas of communism (hardly anybody did) but they believed in their careers and connections with the system for which they worked and which created good conditions for them and their families. Therein is the evil root of communism. Yet there were no idealistic communists in Lithuania, especially under Leonid Brezhnev.

I believe that even Petras Griškevičius and Antanas Sniečkus wanted Lithuania to be an independent socialist republic but governed by the same principles in that they would be the ones in power. As a result their whole conflict with Moscow, which they have written about superbly in their memoires, are personal conflicts wherein they sought to increase their power in the Lithuanian Soviet Socialist Republic but at the same time governing it with the same totalitarian and authoritarian methods. Sometimes though they presented it as an aspiration for Lithuanian independence.

Consequently there are a lot of interpretations that are muddling and which attempt to confuse and mislead people. As I have said, we'll always be confused if we don't make a stand against totalitarian and authoritarian principles with the principles of democracy and a sovereign nation.

I remember what a storm you caused with your opinion of Justinas Marcinkevičius. Surely we can talk about him objectively?

I think it's been a long time. I don't quite understand why people are linked in such a personal way to the Soviet past. Justinas Marcinkevičius symbolizes how people perceive themselves; it's as if they don't approve of the reality but nevertheless live in it. Justinas Marcinkevičius both in his poetry and poems portrays a very specific self-adaptation to the Soviet reality model: you adapt yourself but you love or adapt yourself and collaborate out of love for Lithuania. For example, Mindaugas is a bastard but everything he does he does for Lithuania.

An image like this I think helps many people think about themselves in the post-soviet reality in that they were never Soviets and that Lithuania is at any rate dear to them. Mr. Marcinkevicius therefore and people who live in the Soviet reality are like a bridge, a reason why they do not have to change and take another look at their own positions and rules. That's now why people don't like it when Mr. Marcinkevicius is questioned or an attempt is made to look at him critically and at the stereotypes that shape his poetry. And that's because to them it looks as if their own laws are being analysed and as if they themselves are being questioned.

I really couldn't be bothered with questioning what someone is; what I'm interested in is how a totalitarian regime that gathered up intellectuals and the talented managed to tame people using a sentimental style with all kinds of national symbols and metaphors for love of nature, the fatherland and the earth so that they wouldn't resist and be productive Soviet citizens. Here Mr. Marcinkevičius is a key figure but the fact that he is being questioned is very painful to people.

Diverging views on poetry has become an issue of a heated debate on history and censorship after...

Lithuanian culture minister: We must defend our identity, not only territory (1)

Lithuanian Culture Minister Šarūnas Birutis has stressed that when it comes to the country's...

When geography is not enough - three Lithuanian paths to Europe

In her latest book, Three Lithuanian Europes: the Nation, Europe, and the EU in Modern Identity ,...

As Lithuania has been a member of a great supranational union for a decade now, Lithuanians are forced...

The 25th anniversary of the Baltic Way gives food for thought about a number of things: the...

For the sixth time in a row, all Lithuanians, in their Homeland and abroad alike, celebrating the...