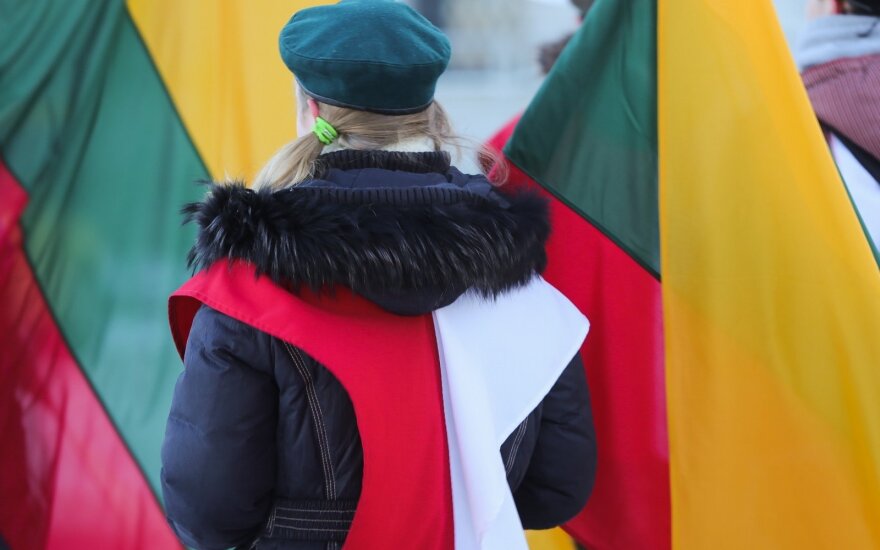 A survey of Southeast Lithuanian gymnasium students performed by the Lithuanian Institute of Cultural Policy (LKPI) revealed that 66% of the youth in the region feel that Lithuania is their homeland, 31% say the same of the Vilnius region and 12% - a different country. “Currently great changes are undergoing in Southeast Lithuania and our country has an opportunity to finally make the area into a real region of Lithuania,” the head of LKPI Antanas Staponkus said. Lietuvos Žinios reported.

Related articles
Seimas not to rush with Natl Minority Law, name-spelling - Speaker
Ažubalis. Will Lithuanian-Polish relations step out of the deadlock?

“When presenting the work done even high state officials were curious how we were accepted into the schools in the region. It is no secret that in the Vilnius region schools you can often hear the position of “do not mind our schools, deal with your own”. But we did not create any antagonism through national language, culture, tradition and Lithuanian national culture. We were most interested in finding out how isolated the region is from others, how well its students know Lithuania and what they associate their future lives with,” Staponkus explained to Lietuvos Žinios.

The wide spectrum research “Analysis and evaluation of Southeast Lithuanian students’ cultural needs” was led by the Lithuanian Academy of Science member, professor Arvydas Virgilijus Matulionis and was performed in April-November last year at 21 schools in the regions of Vilnius, Šalčininkai and Švenčionys. During it 1141 gymnasium students from 19 gymnasiums in the region that teach in Lithuanian, Polish and Russian answered an anonymous survey.

What the Homeland is?

Students who identify themselves as Polish primarily link the concept of Homeland with their area of origin (73%). Lithuania was the first choice of 59%, the Vilnius region – 36%. Only 14% of ethnic Polish students view a different country as their Homeland.

Area of origin was the primary choice (71%) of ethnic Russian students surveyed in East Lithuania. 61% identified Lithuania as their Homeland, the Vilnius region – 19%. 24% of the Russian origin students viewed a different country as their Homeland.

Vytautas Magnus University Centre of Letonics head Dr Alvydas Butkus believes that comparing the results with the flow of negative information about Lithuania which floods toward Southeast Lithuanian inhabitants, including students, we can see a positive trend of perceptions of the country.

“That only 12% of the region’s youth view a different country as their Homeland actually gladdens me. Nevertheless Lithuania should put forth greater efforts to integrate the students of the region, unfortunately it is not being done. There is much talk of civic education in Southeast Lithuania, but in fact education has been left in the hands of municipalities and elderships and we know perfectly well that power in these regions is in the hands of the Polish Electoral Action in Lithuania and we know what views its leaders hold. Currently we are faced with the results of the state’s passivity in the region, something that is reflected in the survey data,” he said.

According to the head of the LKPI it should come as no surprise that more than a fifth of the students who identify themselves as Lithuanian specify a different country as their Homeland. “Children in the region often say they are Lithuanian because they go to a Lithuanian school, despite neither of their parents being Lithuanian in origin. There are numerous children who speak in two, three languages at home. They perhaps view themselves as Lithuanian, but when they have to be specific about their Homeland – they get confused,” A. Staponkus explained.

Due to this, he believes, a number of the students surveyed identified their area of origin or the Vilnius region as their Homeland. “The child would seemingly want to specify their area of origin, but then they see the choice of “Vilnius region”. That concept is very important to them as well (perhaps thanks to teachers). When they see the word “Lithuania”, the students are left wondering once more – they were born and raised in Lithuania, perhaps that is their Homeland? Then they consider that based on origin they are Russia, Polish or Belarussian, perhaps their Homeland is another country? Numerous students faced with such a choice openly admit – “I have no nationality, I do not know what I am.” Admitting this they become sad and feel they have lost something important. Those children need to be helped. Lithuania needs to be opened to them,” the head of LKPI stressed.

Member of Seimas, political scientist Laurynas Kasčiūnas who focuses on the issues of Southeast Lithuania believes that the LKPI research reveals a number of positive trends in the region. “If we are to look at the research on older generations in the region, we would see that many of them see local identity as a strong support to identity (alongside Soviet nostalgia and greater influence of Catholicism). This means that they answered Vilnius region when asked about their Homeland, rather than answering Lithuania. This student survey reveals that though identifying with the Vilnius region remains strong, prevalence is with choosing Lithuania. Of course it is hard to say what they have in mind when they say “Lithuania”, but the state’s duty is exactly to fill this choice with real content,” the political scientist said.

East Lithuanian students’ knowledge linked to an understanding of statehood and nationality is, for now, not exemplary. The researchers asked children about key events in Lithuanian history, about widely known historical and contemporary figures in Lithuanian, Polish, Russian and Belarussian culture who have left a clear mark in the history of the country’s culture.

In terms of Lithuanian history, the survey takers often mentioned Gediminas, Mindaugas and Vytautas, some students spoke of Algirdas Brazauskas, Dalia Grybauskaitė, Vytautas Landsbergis and Justinas Marcinkevičius. Adomas Mickevičius and Jogaila are typically identified as figures from Polish history, a few under 20 entered Józef Piłsudski. In terms of Russian history the students highlighted Vladimir Putin, as well as Czar Peter the Great, Empress Catherine II. Figures from Belarussian history were harder to recall for the survey takers, mostly the name of current head of state Aleksandr Lukashenko was mentioned.

The students also struggled with “guessing” the areas related to 16 listed particularly famous Lithuanian, Polish, Russian and Belarussian individuals. Only 2/3 of the youths knew who Mindaugas was. Only 19% identified Vytautas the Great correctly, 26% - Jonas Basanavičius. 51% answered who Vincas Kudirka was correctly.

According to member of Seimas L. Kasčiūnas, this part of the research reveals the gaps in government work in the Southeast region. “It is clear that the students cannot find personalities that could unite this community with the state of Lithuania. Our goal is to strengthen the link to Lithuania, particularly in terms of youths, that their understanding of Lithuania would be as close as possible to the general perception, while also not losing the identity of the ethnic community. I have long repeated that Mykolas Romeris should have a far greater role in ethnic minority education, having said that “I am a Pole, but a Lithuanian Pole, a patriot of Lithuania,” the member of Seimas said.

According to A. Staponkus, during the research it became apparent that Southeast Lithuania is currently in a transitory stage. The future of the region is unclear, the direction of students, their view of their Homeland, their state – is disorderly. “The children are confused because they do not have a value system to base their civic orientation on. Nevertheless we can state that the students surveyed are already a part of Lithuania. They all speak good Lithuanian, none are hostile to the country. We experienced close interaction. The students were interested in hearing about what they did not know and it would appear uncomfortable with their gaps in knowledge,” the head of LKPI said.

Currently in the Vilnius, Šalčininkai and Švenčionys regions there are 16 Polish, 12 Lithuanian, 1 Russian and 8 mixed gymnasiums that teach in several language. However according to A. Staponkus during the research it was revealed that in this region it is impossible to distinguish schools based on ethnicity. “These are educational institutions in one of the languages taught. Children of various ethnicities study in them and their distribution is hard to explain,” he stated.

Take for example the Švenčionys region Švenčionys Mindaugas gymnasium where the language of instruction is Lithuanian and 94% of those attending are Lithuanian; in the centre of the same region there is the Zigmas Žemaitis gymnasium with only 58% Lithuanian attendees. The Vilnius region Nemenčinė Lithuanian Gediminas gymnasium has 62% Lithuanian students, while the Meilė Lukšienė gymnasium in nearby Marijampolis has fewer than half. In the latter 44% of the student body is comprised of Poles and 15% - of Russians.

“We should strive to ensure that the Lithuanian government does not neglect the region, as it has so far. The Ministry of Education and Science has seemingly distanced itself from the problems because the schools are managed by the municipalities, there are no economic-social projects. In such a context one can only feel sorry for the children. I wish that the government would provide the youth more help, would open wider opportunities and would break down the barriers surrounding them. For this we need to be more active and more professional,” A. Staponkus noted.