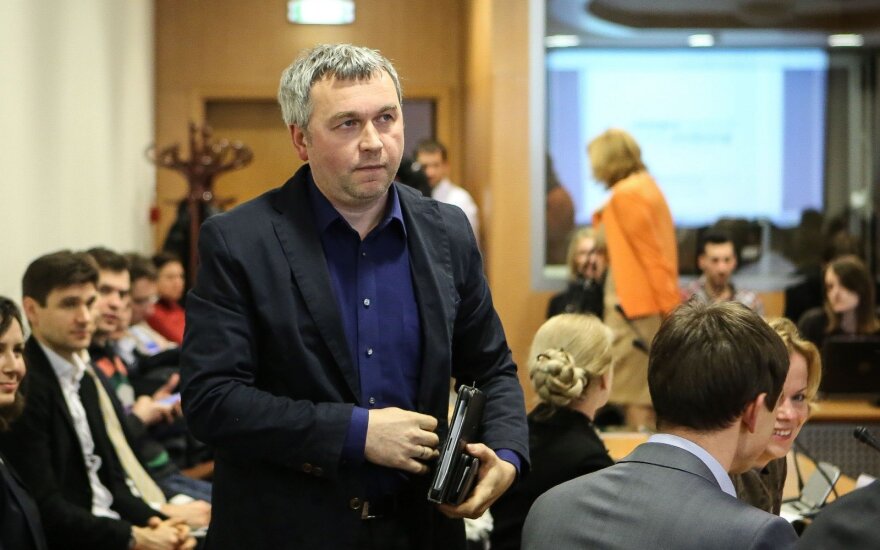 Many of those working freelance have gone up in arms against the coalition government over the rise in SoDra tariffs this year. This has made the government seek ways of easing the fates of authors, sportspeople and performers. Economist Raimondas Kuodis believes that such disputes could have been avoided with a fundamental reform of the state social insurance system.
R. Vainienė agrees that the system needs reforms, but recommends to those working freelance to decide on their own, whether they should pay to SoDra.

Delfi reminds that those working freelance and without other usual labour relations could have been surprised to find out after January 1st that their SoDra tariff rose this year by 1-4%.

Related articles
Review: who were better of in 2016?
Sodra social insurance budget envisages raising pensions by EUR 20 from January

The payment required from those working based on a business permit and others working without a work contract has near doubled from 56 euro to 99.94 euro a month (or 107,54 euro if the individual is accumulating their pension in pension funds on their own).

The outrage has pressured the Lithuanian Peasant and Greens Union (LVŽS) leader to propose amendments that would return the regulations where charges for author contracts (if they are not signed with the employer) would be calculated based on half the sum obtained, not all of it.
There are also proposals to abolish charges for incomes for license agreements.

R. Kuodis says that there are simply too many forms of labour activity in Lithuania and it is inexcusable.

“Economists who create tax systems in other countries employ the concept of “horizontal justice” which means that you cannot discriminate people who are more or less similar in socioeconomic status. This general principle says that it is hopeless to create separate tax systems for a market peddler, a librarian, a teacher and so on. In such a case every profession can try to prove that they are the most important and deserve special tax incentives. It is obvious that this leads to absurdity,” he explained.

Meanwhile “vertical justice” says that if a person manages to earn more during their whole life, then they should pay more, compared to those who have been unfortunate due to circumstances out of their control explains R. Kuodis.

“Perhaps it is time to come to our senses that diverting from Western principles is inexcusable and creates an animal farm. There are privileged tax (non)payer or partial payer groups which defend their status in various ways by attempting to prove that it is them that deserve tax incentives. As a result we have a situation where the majority of taxes are paid by people who work based on regular labour contracts which are taxed 55%, while a massive army of people pay on average 4%,” says the economist.

According to R. Kuodis such a gap is demoralising and unstable.

“This injustice should in my opinion be abolished through a transparent tax system which would change this current animal farm, which currently generates the lowest budget in the European Union,” he told Delfi.

In R. Kuodis’ 2013 presentation “Lithuanian tax (non)system reform directions” it is stated that a good tax system is based on five principles – the aforementioned horizontal and vertical justice, maximum efficiency, low cost administration, transparency and flexibility.

Based on these principles he proposed to turn the majority of the Sodra tax into a savings account for old age.

In his 2016 presentation “How to non-cosmetically reform SoDra” R. Kuodis explained that a transparent instrument of retirement savings could significantly reduce labour taxation, would hamstring the black market, would suitably react to the issues of aging and labour market contraction as well as creating a social credit system.

The economist mused that only by beginning to work could citizens borrow from SoDra. So to say “withdraw” from their account, if it were needed to fund studies or parenthood.

Such an account could also be charged as a disciplinary measure for those avoiding to pay alimony or fines.

1. Firstly wages “on paper” should, via legislation, be raised 31% (the employer’s SoDra charge). This significantly reduces incentives to take under the counter payments. Such an intention has been expressed by the LVŽS as well.

3. Earlier employee payments to SoDra are converted to euros based on a special algorithm. No more mystical “points” are accumulated, personal accounts accumulate euros (akin to banks).

4. The presence of euros in accounts enables the creation of a social credit system.

5. The state budget funds base pensions.

6. SoDra is integrated into the state budget and ceases absurd “borrowing” from the government, that is the Ministry of Finance, thus removing ambiguity for its future.

7. Extra pension contributions are paid by SoDra based on the principle “however much you contribute during your life is how much you take back”.

This removes the problems of work experience calculations with those who emigrated, returned, emigrated again, while also essentially depoliticising pension decisions.

8. A defined pension age ceases to be because the citizen works as much as they want and are capable, can retire if the situation in the labour market worsens and can return from retirement if the labour market improves.

9. Incentives for early retirement disappear and in the future labour will be scarce anyway. Furthermore in any case Lithuania has to rein in the ratio of those employed to retirees.

10. Citizens are encouraged to work longer because they gather more and use less of their fund. Finally SoDra could pay interest for gathered funds, depending on labour efficiency, the changes in the ratio of retirees to employees.

11. Such a reform would prevent injustices where those not contributing to SoDra still demand benefits from the state.

12. SoDra payment ceiling established at the level of four or five insurable incomes (1.9 to 2.4 thousand euro in 2017).

13. Second stage pension funds become redundant and Lithuania ceases to send significant sums of funds abroad, which has been harmful to the economy.

This begins to leverage one of the advantages of SoDra, when savings are essentially returned back into the economy (pension payments to current retirees), while administrative costs are minor due to the lack of “investment” necessity.

14. A SoDra council should be created with its own actuaries and pension economics specialists.

15. Gradual recreation of the reserve fund intended for the reduction of the influence of major economic fluctuations on the pension system.

A situation with no way out?

Economist Rūta Vainienė has different thoughts about the payments of freelancers to SoDra. She views Karbauskis’ intention to return the 50% income base positively, but agrees that the system needs reform.

R. Vainienė says that it is necessary to review the social insurance taxation of individuals who create their own workplace because they receive incomes irregularly.

“It works so that people will not necessarily receive payments when they pay charges. Not parenthood, not illness, not pension. Because you need to gather a social insurance seniority, which is calculated with even greater requirements for them.

You have to earn three wages for it to be identified as one. It is far harder for them to gather 30 years of labour time than for those who work based on a work contract. Specifically due to this reason the Sodra participation of all freelancers should be reviewed,” the economist told Delfi.
R. Vainienė is thinking of two options of how this could be done.

Firstly – to remove charges altogether. The second – individuals choose themselves.

“I am in favour of the second because some authors earlier even cried that they have no social guarantees. They should be given the choice – either you pay charges and receive guarantees or you pay nothing and receive no guarantees,” she said.

Vainienė says that if the latter had something happen to them and they asked a pharmacy for help, the social welfare system would turn on.

“But with these people the likelihood that they will come begging is far lower just because they have already displayed their initiative and activity. They create their workplace themselves,” said R. Vainienė.

The economist explained that it is impossible to abolish extra requirements for those receiving irregular incomes because then SoDra would not achieve balance.

“Because after paying 5 euro you will have the right to 80 euro income, then SoDra will not be balanced. That is how we get a situation with no way out. If you want to make SoDra good for those who are working freelance, then you balance Sodra and if you balance SoDra then those working freelance will receive requirements, which will be impossible for many of them,” she said.

The average old-pension should go up by about 20 euros starting early 2017, which is 5 euros more than...