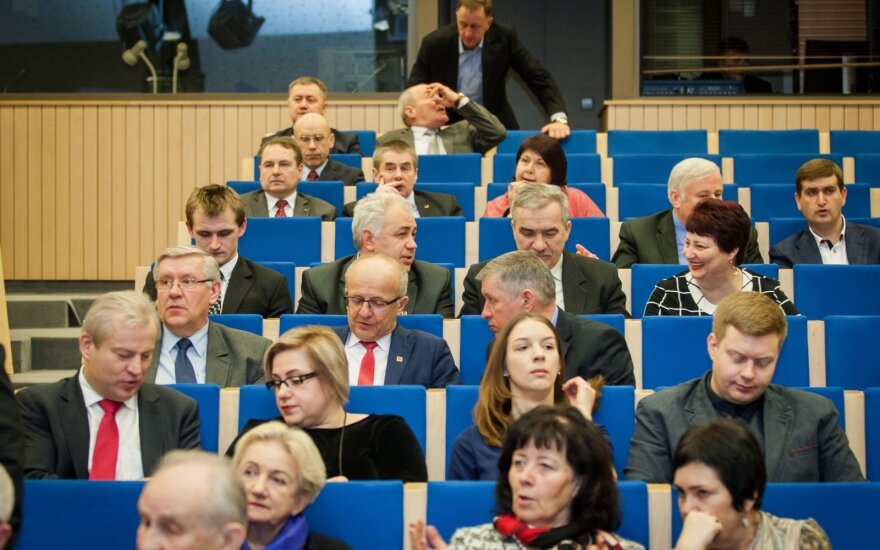 Consultations between coalition partners are normal practice which is established in coalition agreements. It would appear the criticism bore fruit – Prime Minister Saulius Skvernelis has already invited the Social Democrats to a meeting.

A. Butkevičius says he has also spoken to R. Karbauskis that the “Farmers” and Social Democrats should consult regarding this at the group prefect level.

However coalition council meetings were not organised, thus the SocDems opted for an alternative tactic, they started inviting S. Skvernelis’ cabinet ministers to their group.

For example on Tuesday the Minister of Healthcare Aurelijus Veryga was invited to the Social Democrat group.

“Since they are not organising coalition council meetings, as experienced politicians working in the coalition we wish to hear when the cabinet’s priorities will be presented and what legislative projects have to be presented in order to accomplish them. You know, we cannot be left in the dark for a long time because March 10th is nearing. After my statement in the presidium meeting yesterday I received information that the Prime Minister is inviting me and our group prefect to the cabinet on February 27, the government programme implementation plan will be presented. Looks like they hurried up,” A. Butkevičius said.

According to the Social Democrat leader, he and some of his group’s people will also meet with S. Skvernelis on Tuesday, February 21. But Social Democrat group prefect I. Šiaulienė stated that this meeting was planned earlier and is not related to the criticisms levied during the presidium hearing regarding a lack of joint discussions.

“We as a party and as a group are accused of sitting and waiting, enjoying being in the majority. We were not elected for that. This is why we are inviting the ministers and inquiring them, so that they would present what they have prepared for their sphere in the government programme implementation plan. Because it is shameful. If someone asks you as a politician what the first, second and third priority will be accomplished, by what means and when, then what sort of politician are you?” A. Butkevičius said.

Delfi reminds that the Farmer and Greens Union won the Seimas elections and formed a coalition with the Social Democrats. However the Social Democrats are complaining that they are in an information vacuum – they are not informed about planned reforms and planned legislation.
I. Šiaulienė says that in essence they can only be happy that PM Skvernelis has planned meetings, albeit she is not confident that this is a response to the Social Democrats’ dissatisfaction.

“We lack information,” I. Šiaulienė said.

Press representative for PM Skvernelis, Tomas Beržinskas told Delfi that the head of the ministerial cabient constantly communicates with the coalition partners.

“Perhaps it is not strictly periodical, but it is happening in one shape or another. The Prime Minister invites both the coalition partners and the opposition,” T. Beržinskas said.

However the PM’s representative was unable to comment on the “Farmer” and Social Democrat communications at the Seimas group level.

Delfi was unable to contact the Farmer and Greens Union chairman and group prefect R. Karbauskis or his deputy Aušrinė Norkienė.