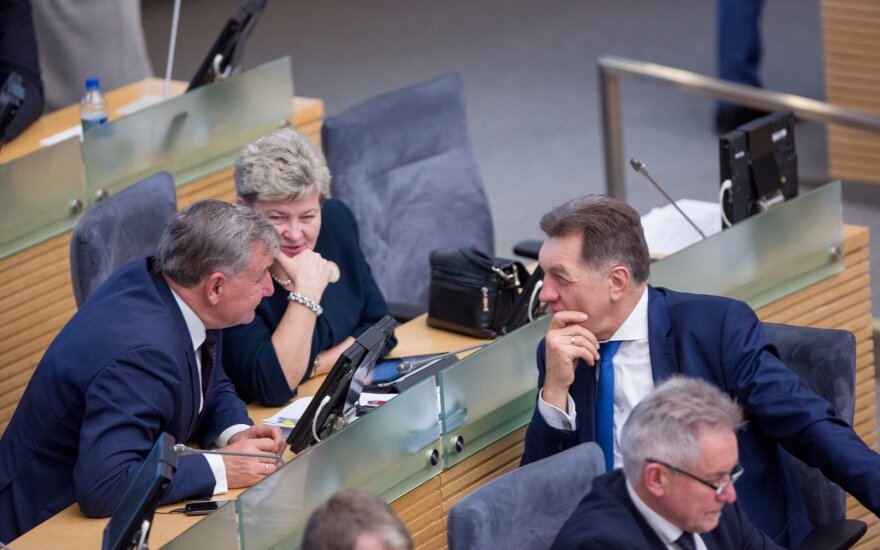 “We are trapped. I have no doubt that our coalition partners’ strategy is to keep is silent and low, with no ideas or initiative. The current relations do not satisfy us,” Gintautas Paluckas, a candidate for the post of Social Democrat Party chairman, said. That being in the coalition under current conditions is a mistake is also echoed by Andrius Palionis and Zigmantas Balčytis who are both in the race for the same office. According to Palionis the coalition with the Peasant and Greens Union is just paper and the coalition mechanisms are non-functional, the Social Democrats are simply an add-on to something.

The upcoming Social Democrat Party chairman election, the crisis in the party and the future of the coalition government were discussed with the four candidates who have received the most support from party branches – Mindaugas Sinkevičius, Gintautas Paluckas, Andrius Palionis and Zigmantas Balčytis.

- Mr. Sinkevičius, your party’s Honorary Chairman Vytenis Andriukaitis has said that the party was left in crisis after the elections. Do you agree? What would you do as party chairman to resolve this crisis?

M. Sinkevičius: I agree the party is experiencing crisis. It is not deadly, but we can all see its symptoms. It has clearly deepened after the elections.

It is clear that there is a lack of leadership and movement out of the crisis.

We hope that during the upcoming party elections we will find the best answer.

I believe that firstly we should dedicate some time for analysis, we should perhaps listen in to public opinion. We should then come to some conclusions.

My goal is to not only take the party out of crisis, but also win a minimum of three elections – party chairman, municipal and European Parliament.

- Mr. Paluckas, what will you focus on in your campaign for the post of party chairman?

G. Paluckas: I will focus on renewal, changing our senior fellows with new ones. The voters have told us they want new faces.

I would also focus on identity reform. Today everyone is discussing income inequality, social segregation, it is being done both by the Conservatives and the Peasant Greens.

Today many Social Democrats say we should take from the rich and redistribute to the poor. Meanwhile the Scandinavian Social Democracy is noted for its principle of solidarity – everyone pays and everyone receives. I believe this principle will allow to not antagonise society. Currently the public is antagonised, the Peasant Greens are doing so very successfully.

- Mr. Palionis, are you firmly committed to going all the way in pursuit of the post of party chairman?

What message will you bring for fellow members and the part of the public which supports the Social Democrats?
A. Palionis: I am firmly dedicated. Just as the other candidates I am familiar with the situation in the party. There is a crisis, many party members are awaiting the chairman election with concern.
During meetings with fellow members in branches I stress that we need fundamental change. Management has to change, we have to listen to the branches, what they are saying, what the periphery needs. Currently the party management does not hear the signals.

- Mr. Balčytis, what message are you sending party members and Social Democrat supporters?

Z. Balčytis: I have been in the Social Democrat Party for 17 years now, I have experience and I can clearly say that if the situation in the party is not overturned, if a person does not appear with a team, the future looks grim.

A leader has to appear, one who would put the party back on track. It has to be modern, contemporary, have means to reach it. We have to listen to not only our voters, but also to our fellow members.

For the past 17 years it was hard to find a government which did not feature the Social Demcorats. But now it is the opposite – there are almost no governments formed of Social Democrats. As such we need to fundamentally review the system of governance.

- Everyone is talking about renewal, the pursuit of new leaders. You are one of the most experienced Social Democrats. Can renewal and a new direction be associated with you?

Z. Balčytis: I am 63 years old, I have experience and a certain political weight. Sometimes when making decisions on party reform you also need experience and wisdom. I am glad to see a number of young colleagues participating in the election, I see them as future members of my team. I believe we are capable of stepping over this barrier, putting an end to the grievances of the past and have a leftist party in Lithuania which would return to the values it declares. We have beautiful slogans, we present them to the people, but on entering government or in coalitions we are unable to implement them.

- Mr. Paluckas, what do you think about the current situation in the party? Do you disagree there is a crisis?

G. Paluckas: We have agreed with Vilija Blinkevičiūtė to not use the word “crisis”. We are speaking of the dead end we have ended up in. This did not happen immediately. It is a systematic issue we were headed to for two years. We could see where we are going, but were not making any conclusions.

- You have long criticised party management and are one of the most vocal critics. In your opinion what are the core reasons behind the current situation?

G. Paluckas: I believe the main reason is distance from the public. It was due to harsh mistakes made in party policy, strategy and communication.

In 2016 the party leader explained that prices were not rising though peoples’ wallets were being emptied. The gap became massive and this resulted in the negative results in the Seimas elections.
The reasons were obvious, but some stayed silent about it too loudly, while others spoke of it too silently. The elections to Seimas were nearing and no-one in the party wanted to confront the chairman.

- Mr. Sinkevičius, what do you think about it? What caused the current situation in the party?

M. Sinkevičius: It is clear we have all made mistakes. All the colleagues here are from various managing posts in the party.

I believe that we must take responsibility and not claim that mistakes were made by someone else. It is time for self-analysis, lament and apology.

There were definitely mistakes made, we got derailed and lost social sensitivity, too often the government was putting out fires rather than trying to conceptually review what things look like through the prism of a leftist party.

Now we will definitely find time to discuss how we should get out of this situation. However one person cannot do everything. It is obvious we have not nurtured a second Brazauskas, thus we will have team-based leadership.

- Mr. Palionis, what do you think about the Social Democrat presence in a coalition with the Peasant Greens currently and under current conditions? Is it a mistake?

A. Palionis: If we look at the conditions, then yes, it is a mistake. Under such conditions the Social Democrats should not be in a coalition.

- Mr. Paluckas, what is your opinion? Is being in the coalition beneficial to the Social Democrats?

G. Paluckas: We are trapped, I have said so. I have no doubt that our coalition partners’ strategy is to keep us silent and low, with no ideas or initiative.

The current relations are definitely not satisfactory. I do not know who will win the party chairman elections, but I will put in all possible effort into us renegotiating with the Peasant Greens. Such conditions simply do not satisfy us.

- If you are elected party chairman, will you cancel the current coalition agreement and seek to change it?

G. Paluckas: I am not seeking to cancel, I am seeking to change. We want a greater role in managing public problems. Our current role does not satisfy us.

We are Social Democrats and it is very odd that we are not solving social, healthcare and education issues, those which are currently most pertinent in Lithuania.

- Mr. Sinkevičius, your situation is difficult, you became Minister of Economy when the Ministry of Social Security and Labour was traded for the Ministry of Economy. What is your position on being in government with the “Peasants” under such conditions as you have now?

I remember that in the party council all three of us said that we would like to enter a coalition with the Peasant Greens, however at the time the negotiation results were unclear.

We negotiated, but the negotiations were done poorly, I admit that. However I do not feel as a hostage of this situation. I believe that we can talk and renegotiate. We can also slam the door and leave, but what would this mean for the country?

The “Peasants” and the Conservatives? A “rainbow” with the opposition? Thinking of such alternatives I think the current situation is not the worst. Furthermore if we are to talk about renegotiating, it is not just the party chairman’s decision; it has to be accepted by the whole party.

- However a new chairman elected in a general election will have such a strong mandate that they will definitely be able to make decisions on a new round of negotiations. Mr. Balčytis, what are you thinking about the current coalition and conditions?

Z. Balčytis: I believe there is no factual coalition. It is a paper coalition because not a single coalition mechanism is working. There is no coalition council or it does not assemble, the coalition partners do not discuss with us. We are left as an add-on to something, one that supports their government programme.

If I were elected party chairman, naturally I would have to initiate discussions in the party on continued presence in this coalition.

I agree that we can renegotiate, I believe that it could work, but we have to raise a goal for ourselves to be normal coalition partners. That we would be negotiated with and spoken to on various questions.

G. Paluckas: The question of coalition is a core one. We, the Social Democrats, also want to show what we can do. We will seek to renegotiate. I am speaking in the name of the party branches I have spoken to, not only my own.

M. Sinkevičius: We can always negotiate and discuss, but the tone of negotiation has to be respectful toward our partners.

I believe the Social Democrats have input for issues beyond the social, healthcare and education spheres. 14 ministries should definitely not be identified as Social Democrat or otherwise.