Skvernelis was warned regarding meetings with Landsbergis: he might get in trouble 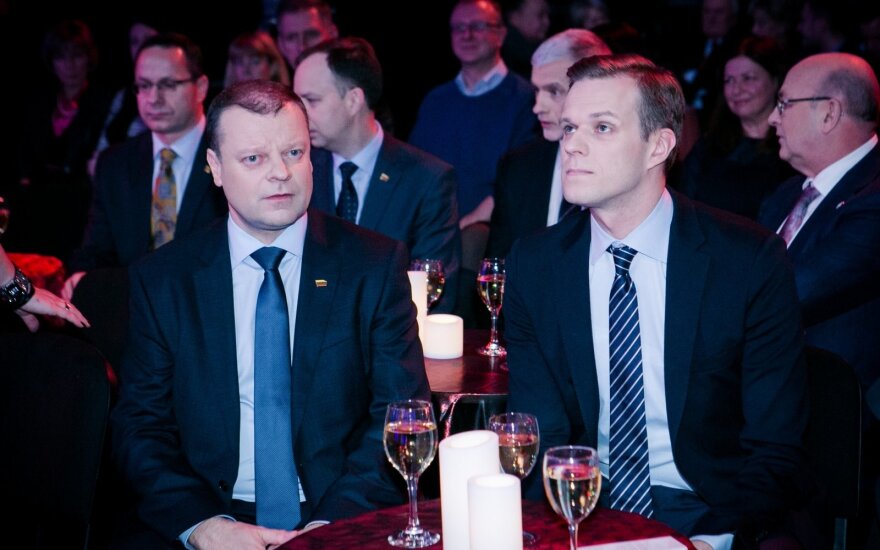 The meetings between the Prime Minister Saulius Skvernelis and Conservative leader Gabrielius Landsbergis, whose content is unknown to the Farmers may lead to a larger gap in the coalition with the Social democrats or even cause it to fall apart, LRT.lt reported.

Also, S. Skvernelis is risking his political future. This is stated to LRT.lt by representatives of “farmers” and political scientists.

This week S. Skvernelis and G. Landsbergis had another meeting not announced to the public. Both the leader of the opposition and the representative of the Prime Minister stated that the main topic was emigration.

Related articles
What would happen if Skvernelis and Karbauskis went in different way?
PM says he sees no conflict with Farmers in Seimas

Exactly a month ago, both of them had an unannounced meeting at the Government. Then the leader of the Conservatives (TS-LKD) joked after the discussion that they talked about the Prime Ministers attendance in the TS-LKD convention and the selection of “Eurovision”, even though the analysts guessed that they probably talked about support on certain projects. How to evaluate meetings like this?

G. Kirkilas: “farmers” may be doomed by the voters

The vice-leader of the Parliament and the Lithuanian Social Democrat party (LSDP) Gediminas Kirkilas think that meetings like these are strange.

“The opposing party to make themselves important, politicize. Also, I believe that the Conservatives are not pleased that they did not into the ruling coalition and what they do certain things. When I led the minority government, I did have meetings with the opposition, but it was a minority Government. Maybe S. Skvernelis feels like in a minority government, but that is not this case. However, meetings are happening and they seem odd to me” G. Kirkilas commented to LRT.lt.

G. Kirkilas thinks that the ones who suffer from these meetings the most are Lithuanians’ farmers and Greens Union (LVŽS) in the eyes of their voters because they are anti-conservative. “But that is their problem. The opposition always rocks the boat, but the results may be opposite – it may strengthen the coalition. I don’t see any problems there at the time. I think that all politicians understand what is going on” – explained the vice-leader of the Parliament.

Simonas Gentvilas, a member of Litberal Movement political group, reminded that S. Slvernelis has a non-partisian status an is free: „he does not have a prty ticket, was free and close to the „order“, so who will be loyal to? In the public opinion and the majority, who will support him. There is a posibility that he will separate from „farmers“. Everyone has a righ to meet in politics but the context is clear – S. Skvernelis is in conflict with Ramūnas Karbauskis.

According to S. Gentvilas, it is clear that G. Landsbergis is trying to fracture LVŽS and S. Skvernelis is surrendering to that. “Maybe S. Skvernelis is being led by his own interests, or maybe there are other reasons. But if he does not want to fracture the group, he would not meet G. Landsbergis, because the prime Minister have the majority in the Parliament. He would work with them. I think that this is the interest of S. Skvernelis himself: to fracture a little and meet other leaders of opposition”, said a member of LS group to LRT.lt.

“Farmer” Eugenijus Jovaiša to the representatives of LRT.lt claimed that while the Prime Minister has a right to not only meet with members of the opposition but also the right to speak with other political parties. If the interest discussed between the parties and the Prime Minister are not related to the interest of the state, it raises questions.

“I don’t know, what they were discussing together, nor what problems were solved. Furthermore, I don’t know the context of the conversation. […] For the voter this might seem strange. There, should be clarity and transparency. In order to reveal the nature of the meetings. Then there will be no doubts” – E. Jovaiša stated.

In turn the LŽVS political group member in the Parliament Povilas Urbšys stated that several members of Social Democrats have expressed their negative feelings in regards to the treatment of them as coalition partners and the lack of cooperation, thus further tensions could arise from the demonstration of close relations with the members of the opposition.

“For further bill proposals, related with making essential changes, you really need to look for support from all the political groups in Parliament. But, it’s another thing when political opponents want to raise tensions. This can lead to further tensions with the Social Democrats, which would be beneficial to no one else, but the conservatives. The tensions can also increase within the LŽVS political group, as currently G. Landsbergis demonstrates support for all initiatives coming from the Government. As if almost trying to drive a wedge between S. and R. Skvernelio Karbauskis." - P. Urbšys said.

He could not answer the question, regarding with whose initiative where the meetings between S. Skvernelis and Mr Landsbergis held, but the Conservatives themselves exploit differences of opinion between the “Farmers” and often take the side of the Prime Minister. “It’s normal that the exchange of opinions occurs and a political compromise is sought after. However, some political opponents are beginning to indulge in the “juggle” and differences in opinions, in an attempt for it to grown in a conflict which would not be productive for us” - P. Urbšys continued.

To the question whether, the politicians asked whether he knows about the content of these meetings, P. Urbšys stated: “That the content is one thing, and what is presented is another. I am in favor of finding political support not only from the ruling coalition, but also from the opposition. However, we must bear in mind that we cannot become tools in the in hands of the opponents. Everything can lead to an attempt to highlight disagreements, differences of opinion, which will ultimately lead to the interest in fragmenting the political group. We have to do what we can to strengthen, not weaken it”

Political scientists: the coalition ship is being rocked

“The answer is simple – the boat of the coalition is being rocked, stated the Vytautas Magnus Universities (VDU) political scientist Algis Krupavičius to LRT.lt. – I think that there are personal negotiations and setting up strategies at the top. However, a small part of TS-LKD and “Farmers” are either informed or somehow included.

According to the political scientist usually this is not how people behave and it lacks political experience. “Yes, the leader of the party himself does not go and knock on the door of the Prime Minister. These things have to be public – it will help to avoid conflicts. However, very little time has passed since when they started working. It would not be perspective to change players in the game. All in all, S. Skvernelis raises a lot of questions with his actions. It is doubtful if the trust inside the party could increase. I would say that inside he is putting a high risk on his political future” explained the political scientist.

Political analyst Ginas Dabašinskas said that these meetings are making a way for the configuration of the next governing majority.

“One solution does not exist in politics and a lot depend on the situation, but a few directions are chosen now. One – work with Social Democrats and see what can be done in implementing the governments’ program. Another direction – gather the Governments supporters – some projects are signed by certain members of the Parliament who could make up a political group. A third more radical road – change the configuration of the majority in power. This is the road being taken in my opinion” guessed G. Dabašinskas.

According to the analyst, it is not clear whether the third option will be implemented but the Conservatives are interested in being in the governing majority.

G. Dabašinskas stated that it is clear that the divide between position and opposition in Lithuania has not formed yet. Everyone can work with each other and only in rare cases politicians’ state that they will not deal with a certain political power.

“I agree that for a person who participated in the elections and who wants to see only coalition partners in the government may have questions regarding these meetings. He can say: you said that you were going to work with only one part, but are working with all of them. But policy cokes closer to a person only during the elections. And after that drifts away” – G. Dabašinskas told LRT.lt.

What would happen if Skvernelis and Karbauskis went in different way?

PM says he sees no conflict with Farmers in Seimas

Lithuanian Prime Minister Saulius Skvernelis says he sees no conflict with the political group of...