Edmundas Jakilaitis
Prime Minister Saulius Skvernelis, who is running for president, presented his vision on Wednesday. Its main accents are social justice and transparency. He also presented certain members of his team. 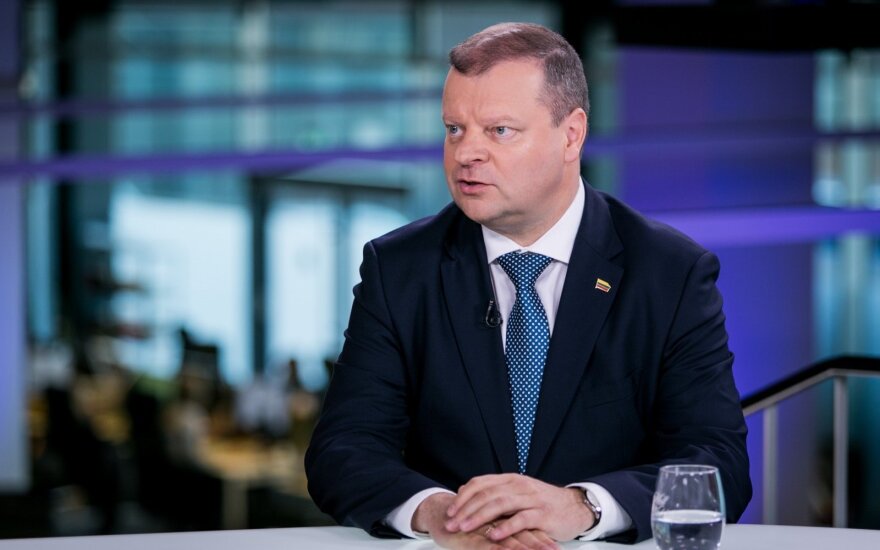 The prime minister has faced criticism for his cabinet now lacking female representation, but when questioned if his featuring of three women when presenting his team was a sort of response to the criticism, he remarked that the focus was on Vytautas Bakas, who was introduced as the leader of his electoral headquarters and that each of the women introduced was chosen as a representative of core components of his programme. S. Skvernelis also stresses that while his cabinet featured the largest number of female ministers of any prior government and the emphasis on the current lack of representation is more a fact that is being focused on by political opponents.

Recent surveys from Spinter Tyrimai have shown that despite Visvaldas Matijošaitis choosing to not run for president, S. Skvernelis' ratings have only increased by one percent, with the top three currently being Gitanas Nausėda (28% support), Ingrida Šimonytė (22%) and S. Skvernelis in third with 15%. Nevertheless, the PM is confident that the ratings will change and notes that his campaign only starts now.

"Let's wait... I believe the first real comment will be possible on May 12th. That's when the question "how do you view the results?" will truly be relevant. And not solely to me," S. Skvernelis said.

In terms of expected vote percentages, the PM solely noted that support for him should only rise and believes a good result would be entry into the second round of presidential elections. As for concrete numbers, he was unwilling to make any predictions.

When asked about a potential replacement for himself in case he is elected, S. Skvernelis responded that there have been discussions of this, but the elections need to be won first and potential candidates to replace him will be named only in April, when according to him the real campaigning begins. The prime minister emphasises that the proposed candidates will definitely be capable of taking the office. Furthermore, according to S. Skvernelis, party affiliation is not to be taken into consideration, just formal and professional traits. Nevertheless, he did not deny that potential candidates could be found within the party as well.

S. Skvernelis does not believe that "Farmer" leader Ramūnas Karbauskis could end up in the office of prime minister. At the same time denies that if he wins the presidential elections, the political situation in Lithuania could become akin to Poland where a single party has delegated the president and also controls both cabinet and parliament, but the leader watches the process from the side. The prime minister explains that the two situations cannot be compared because the decision on who will become president will be made not by the parties, but by the Lithuanian people, just as occurred with the Seimas.

Responding to concerns that R. Karbauskis could end up controlling the Presidential Palace, cabinet and Seimas, the PM responded, "Today he is absolutely not controlling the cabinet, not interfering and never has, instead he is doing an important job and I say this with all responsibility. In Seimas there is a large Seimas group with different people, experiences and opinions and it is Karbauskis' job to unite the group, which is a key factor. He does not interfere with either Seimas management questions, nor with cabinet matters. Yes, we maintain a close connection to the Seimas group, but it is natural because no cabinet decision can pass without support in Seimas."

Turning to Brexit, S. Skvernelis expressed concern that a no deal scenario could emerge. He states that preparations are in place and legislative projects have been submitted to soften the impact and defend the interests of both Lithuanian and British citizens, who live in Lithuania. In regard to proposals from French President Emmanuel Macron, S. Skvernelis remarked he is very sceptical of a united EU budget, or joint financial official.

"I do not believe that this office would contribute to maintaining EU unity. Many countries have such an office. This, I believe is a key matter because it is linked with financial prospects. I could also say that I am sceptical of proposals regarding a common European military," S. Skvernelis said, pointing out that the proposals coming from some of the major European capitals often conceal their real goals, which lead to groups in Lithuania, such as the logistics sector or farmers feeling discriminated.

The prime minister has stated that for his first visit, he would travel to Poland if he were elected. He believes this is a logical and acceptable step in regard to current relations with Poland. He points out that he was presented with the Man of the Year award in Poland's Krynica Economic Forum for a reason. Furthermore, he notes, the two countries maintain strategic partnership in a variety of spheres ranging from economics to infrastructure and defence.

In regard to Astravyets Nuclear Power Plant, the prime minister has faced criticism over his proposal to Belarus to change the plant's project to a gas-powered one. He emphasises that this was not a move made without consultation and was discussed with the minister of energy and his ministry.

"It is a realistic proposal, which employs almost 70% of the infrastructure where you could convert the nuclear plant into a gas-powered one. There are similar examples even in Belarus and across the Atlantic. [...] This proposal is a very pragmatic signal to our neighbouring state – are you building an unsafe power plant in order to diversify energy resource supply to Belarus, to solve energy problems or is it after all a tool of political pressure and not even an independent project, which we suspect? We will see what they answer. Our proposal is truly rational – ensure the supply of cheap gas, have a safe generation system, not depend on Russian gas. This would be a true signal for warming bilateral relations," S. Skvernelis stated, confident in his proposal's chances despite Astravyets NPP's contractor Rosatom not building gas plants.

A number of opposition Seimas groups with presidential candidate Ingrida Šimonytė at their head at...