LT Daily, Media Briefing
aA
Seimas accepted Saulius Skvernelis‘ appointment as PM on Tuesday. The first tasks awaiting the new Prime Minister over the next couple of weeks are to form a new cabinet and prepare a government programme. S. Skvernelis spoke on these issues in the show Dėmesio Centre on LRT. 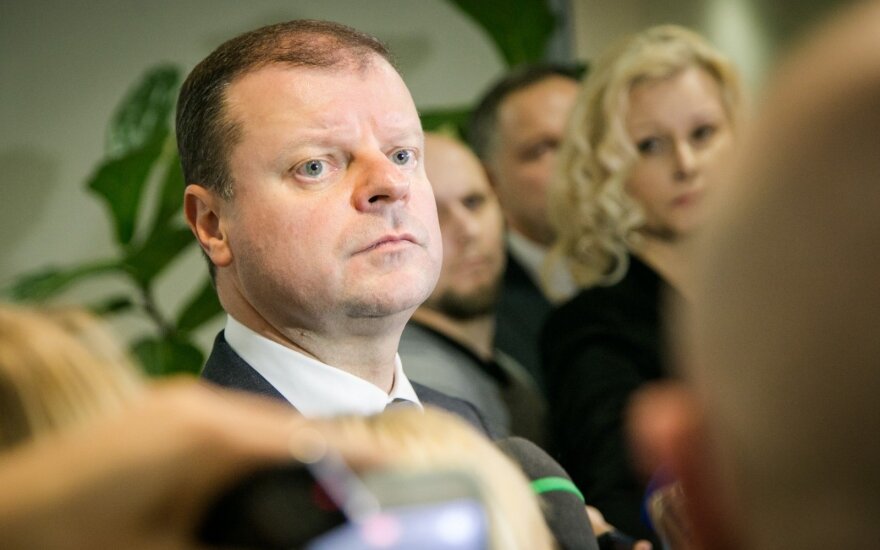 - - You intend to reform such a vast number of different areas to the point of bursting. Briefly, what change will you seek?

I hope we won’t burst because I am gathering a team that will share responsibility and work.

- The impression is that all areas will experience reform.

There is no need to use the word reform. Today in Seimas we saw that there are definitely a number of areas where smaller or larger changes are needed. When the government programme is approved it will be necessary to make a plan of implementation and identify priority topics to begin with.

- What are those key moments? In what areas will change be the most important for you over the next four years?

I can straightforwardly identify the reduction of poverty and social stratification. We understand that it is a massive problem and we have to attempt to resolve it somehow. We also cannot ignore the demographic situation – both emigration and birth rates. If we want to have a future and the future is our children and youth, we have to make changes in education reform. If we are to speak of the areas most receptive to finance, we will see that the healthcare system has reached a stage where it needs changes. It is paradoxical, but in this system all of its participants are dissatisfied, both the patients and the doctors themselves. Same applies to social security. If we make no breakthroughs, nurture people who are rather unwilling, incapable or simply have no interest in integrating into the labour market or are already programmed generation by generation to be on social security payments. In the public sector we have the same situation – the sector is large, rigid, dissatisfaction is present on both sides – both users and employees. Individuals who are capable of generating ideas, who can do real work are becoming hard to employ into state service due to the uncompetitive wages. These are key areas which will need change in the near future.

- How do you see your own political future? How capable and willing will you be to make unpopular decisions, thinking about the future?

Once, when I was becoming a minister, I was asked what I will do next. Today I view it as a massive responsibility. It is definitely not a planned career change.

- Are you surprised by the changes of the last 12 months?

More so over the last 24 months. A little more than two years ago I was the Police Chief Commissioner. I decided to participate in the Seimas elections and thought I would work in the legislative branch of government. It is new to me and I was oriented to it. Today the situation is different, the trust of the people set me on course for executive government. I am unafraid of making unpopular decisions. Just that they need to be made based on common sense, rational calculation, seeking results, rather than doing it radically, through revolution. If the decisions need to be made, I will go ahead without thinking of the future. I don’t want to jinx it, but it could be the last stage of me serving the state. I have served the state for 24 years and the current mission I see the same…

- Internal disagreements have already sprung up. You were not supported by one comrade – Dovilė Šakalienė. How would you explain her decision?

I would rather not talk for her, perhaps there were certain ambitions. I do not know, you would have to ask her. I view it normally, it is good that people have a position, it is not a secret vote. I respect the decision of every member of Seimas.

The people who entered the LPGU, particularly the non-partisan part, are brave people. It is important to be unafraid of expressing your opinion. I value what is said and done, not what is spoken behind one’s back.

- Why did she obtain nothing that she expected, nor what was, most likely, promised to her – neither the post of Minister of Social Security and Labour, nor chairmanship of the Human Rights Committee, nor Social Affairs and Labour. She did not even become a member in the committees she was interested in. What happened? She will work in the foreign affairs committee though she has little in common with it.

I would rather not speak of those details. My work now is more concentrated on the future cabinet. What proportions the distribution of positions in Seimas took I cannot say, I was not particularly actively participant in it. Regarding capabilities, the choice to run for office in the Naujamiestis electoral district and participate in debates with expat Lithuanians that is an excellent position for the Foreign Affairs Committee. As far as I know, she will also be offered to participate in a key commission in Seimas, which is related to expats.

- And what of Stasys Jakeliūnas? He was publicly viewed as a candidate for the post of Minister of Finance. What are the reasons that he is no longer proposed as minister?

If Stasys had said that he does not see himself anywhere else than the position of minister, he would be proposed and I have no doubt also appointed. But then there is the Seimas Budget and Finance Committee. Today we have to admit the fact that a financial analyst is needed who is familiar with the topic. It was not simple finding such an individual. In the cabinet we have opportunities to select alternatives, even invite individuals who are not members of Seimas. You cannot do that for the post of Seimas committee chairman. This committee is particularly important, it has the greatest political power in terms of responsibility.

- Has Vilius Šapoka already answered your proposal to become Minister of Finance?

I am keeping to the same position. This week you will find out about the remaining candidates, then I will comment.

- The candidacy of V. Šapoka has been mentioned before. A few years ago he was also brought up. Why this candidate?

For every minister candidate I propose, I will provide detailed comments on what basis I chose their candidacies. Let us not forget, at this stage a law enforcement review is very important. That information is varied and sometimes has nothing to do with illegal activity, as many may think. Information from various institutions is reviewed, not just the SIS [Special Investigation Service]. It is also taxes and the Chief Official Ethics Commission, as well as the police and the security department. If there are certain doubts, the employers evaluates whether the circumstances allow them to take the position or not. For this a certain respect has to be maintained for those who agree to be appointed.

- Today an entire 90 members of Seimas supported your appointment as PM. How would you explain that?

I expected greater support. Both in cooperating in earlier positions and during the campaigning period I declared that I am not viewing people at a partisan level and many political rivals received my personal support. I did not hide it and said that I want those people in Seimas. Today during the vote some tried to merge two topics that the PM would be ok, but the government programme wouldn’t. Don’t fool yourselves. The government programme will be approved with a different vote. These are two different stages.

- Do you feel cheated?

Definitely not. The vote shows how people hold to their declared values, how they talk, how they act. I understand that the opposition finds it hard to make itself vote for a majority candidate. That has to be understood, but I respect the decision of every member of Seimas. I am prepared to constructively cooperate with everyone. Truth be told, I did not even look at who voted and how.

- You were supported neither by the Liberals, nor the Homeland Union – Lithuanian Christian Democrats.

I was hoping for the work relations we had through years of working together in various positions. At least that is how I would act regardless of whether the person belongs in the majority or minority. If I respect someone, I know what the individual’s professional traits are, so I would not hide it and would support. Perhaps that will be the case in the future.

- Let us not talk surnames, but pray tell, what percentage of independents who were invited to be ministers that were your first choice agreed?

I believe around 80 percent. I am not gathering a team of stars, but people who are known in their subject areas and have done something. Perhaps the names which will be announced won’t say much at first glance, but if you work in the area of social security, you will definitely identify the person, that he is an expert in the area, has all the competences needed to do the job.

- So you already know all 14 candidates?

- You are awaiting the law enforcement review, preliminary opinions from the President and then, as was usual before, will bring the whole cabinet line-up to the President?

I hope that I will be able to present all 14 ministers. If there are any obstructions, then an incomplete cabinet will be presented, but I believe that perhaps that can be avoided.

Šakalienė after a meeting with Karbauskis – I would act differently now

Having entered Seimas under the banner of the Lithuanian Peasant and Green s Union (LPGU), human...

Vilius Šapoka , the candidate to take the post of finance minister in Lithuania's new government, is...