Skvernelis: I apologise for jealousy scene was caused by Landsbergis 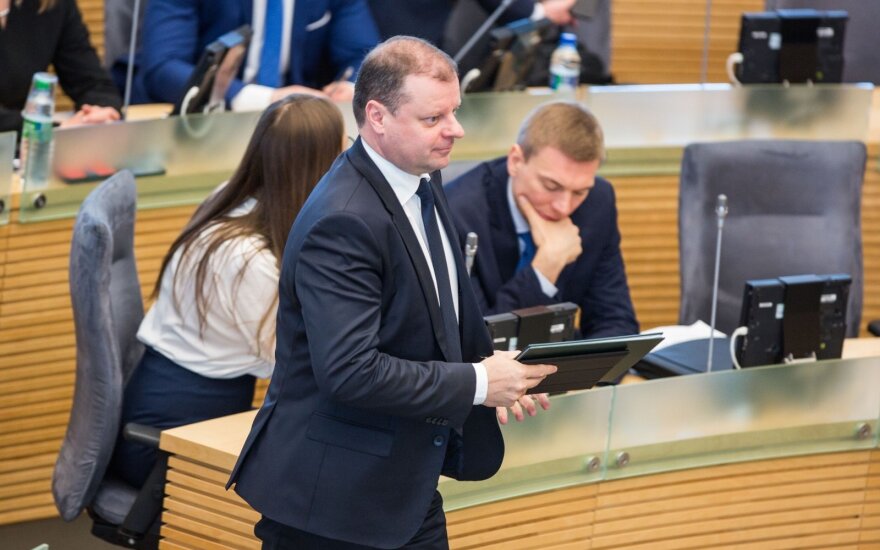 When Algirdas Sysas, a Social Democrat, said that the Prime Minister (PM) "missed his chance to stay silent" and he will meet the new chairman of the Social democrats when he comes back to reality. The PM Saulius Skvernelis retorted that Social Democrats were the ones that missed that chance. However, not to stay silent, but to elect Gintautas Paluckas to the Parliament. „We can't stay silent, when we did, it was bad as well. We need to communicate. I think, that they missed their chance by leaving G. Paluckas with No. 41 in their party list to the Parliament. They needed to look forward. I think, that today the communication would be totally different, if G. Paluckas was a Parliament Member (MP). He would finally know what's going on"– said the PM. About this and other political issues, a discussion in the show „At the centre of attention".

Mr. Skvernelis, lately businessmen are worried about the intentions to change the Alcohol Control Law. There is a proposition for more restrictions to sell alcohol in some places, like outside cafes. Do you agree with these restrictions yourself?

You have to be precise in here. It is popular to say that the PM has nothing to do with this. This project was initiated by 50 thousand Lithuanian citizens.

Yes, it was the idea from the "For sober" initiative. One of its representatives was Aurelijus Veryga, who is now a Minister.

This project received conclusions from the Government, like the other 25 Parliament members. There was a compromise and they managed to find a balance, because the bill is quite radical. When we talk about outside cafes, it was stated that they can be near the stationary ones. Pavilions and tables might appear next to them, etc. We talk about restricting the temporary licenses, that are given or the season. For those that are not stationary and are often at the beach.

There are pavilions in the beach zones and in some cities that are not directly linked to a stationary café. You agree that the use of alcohol should decrease in outside cafes?

The Government did not disapprove of this point.

Because that is how we kept a balance between radical restrictions by seeking to maintain the interest of business and the people, who think that alcohol is too accessible in the country.

Evalda Šiškauskienė, who is he chairman of Hotel and restaurant association, says that 45 seasonal cafes will disappear in the capital alone. Let alone near the sea, where those seasonal cafes are the main source of income. Also, there will be less jobs, students, who can work only in summer, will lose their temporary employment. Aurelijus Kinas, the manager of incoming tourism, said that these restrictions may not affect tourist from abroad but local tourism, celebrations and festivals will take a hit. What do you think?

Festivals have no reason to worry. The Government found a compromise – these decisions will be left for municipalities. No one restricts the activities of non-stationary cafes and pavilions, just the trade in alcohol. If their main goal is to sell alcohol, then it is one view, and the other – to provide food services, selling soft drinks, and other things that are needed by the people who are on holiday at the beach. We understand that outside cafes are equal to a liquor selling point and we see nothing else.

When we know the issues with easy access to alcohol, the number of licenses – it does not look like that. What you mentioned about associations, we heard similar arguments when the GDP exemptions for hotels were discussed. It was said that if it was adopted, the prices wold decrease, it would be easier to stay there, etc, but we did not see that happen. Half the work is done. The Government balanced this as much as possible.

You don't believe the association out of principle? Are they liars?

I have heard similar arguments that gas stations would close if we forbade them to sell alcohol. It is natural. Now the discussions moved to the Parliament. It will be the jobs of MPs'. They will decide if they hear different arguments.

Arūnas Dulkys, Government Controller, after introducing the audit of companies in the state and municipalities stated that they are managed ineffectively, their return is low, and official planned economy is still present in the country. "The least economic company" was called the state itself as there is a lack of order, who is responsible for what. These are sad conclusions, aren't they?

This is the reality that was seen when forming the Government. One of the main questions were state companies. There are a lot of them. They were already depoliticized, management and board formation principles were changed. Eventually, it was decided to separate those who work for profit and the non-profit or public administration ones. We did these without waiting for conclusions. It only confirmed the things that we saw. We have old issues, when we went back to planned economy and even the Soviet times. The next step is Lithuanian forest enterprises, roads, the restructuration and increasing the size of those companies. It is a top priority, and it is directly connected to our opportunity in becoming the members of OECD.

How many years do we need for the state not to manage bookstores, pharmacies, sanatoriums, camping facilities, boar renting places, accommodation, etc.?

I think that legal means will be created this year, and form the 1st of January we will see it change, at least in state companies. Also, the number is impressive in regards of how much the state is disposing them. A process has already started here as well. We cannot be as effected in municipality companies.

One out of ten take part in activities that have nothing to do with self-governance.

We understand how they work, who works there, etc. They don't bring profit, don't pay dividends or only work to stay afloat. We inherited this. This year it will be changed, and next, I hope, we will at least take care of the state company networks.

You did not find time to meet the new chairman of the Social Democrats. Looking at you schedule, it seems that your new best friend is Gabrielius Landsbergis?

I am sorry about his political jealousy scene. We are colleagues, who work in the Parliament. We met three times today in passing, going into the office, saying hello.

I am asking about planned meetings.

I meet all the party leaders and chairmen. And in regards to the newly elected Social democrat chairman, is seems that the elections were tough, especially for the final candidates. There were a lot of emotional talks, and we patiently and silently waited. The Government was criticized, there were doubts about the necessity of the coalition. The elections are over. Not they need to figure out inside the group: what are the needs, what has to be prioritized without preconditions. And it never leads to any good.

Were you angered by this?

Nothing did. I was simply surprised, that Farmer and Greens Union has such demands that should make way for talks. They are doubting the need for a coalition. There are talks that the Government program has to be changed, plan of instruments as well, and etc. it can be discussed without preconditions. And it is even better when you find out about an unplanned meeting on a Monday morning, one that you never knew about. I know G. Paluckas really well, we can talk on the phone in person, write to each other and even meet if necessary. The meeting wold happen but we can' start our talks with ultimatums or conditions instantly. I get it, the election is over, and it is euphoric.

Even though it was for the party chairman and not the Parliament, it is the issue inside the party. Now it is talked about like they had won a majority and are creating a coalition. That is not the reality. Gintautas can feel the mood. I think that he will have a communication scheme for the group, the management will be formed and then their position will be clear. The meeting will happen eventually. Maybe even this week, it does not have to be made into a huge deal. Paluckas says that we don't communicate. Those two meetings per week were hard to set in the coalition. We have joint group meetings. We talk about main issues. Social Democrats could have taken upon themselves to be involved in what matters to them (social questions – LRT.lt).

Some prominent social democrats were displeased with your statement that S. Skvernemlis missed his chance to stay silent.

I would like to respond to Algidas Sysas. We can't be silent, it was bed when we did that. I think that the Social Democrats missed their chance when they left G. Paluckas with No. 41 on their party list to the Parliament. They needed to look forward. I think, that today the communication would be totally different, if G. Paluckas was a Parliament Member (MP). He would finally know what's going on. Judging from his statements about the schedule of the Government and their priorities – those are the actions that are being done and have to be completed this year.

Don't you think that you overreacted? Maybe your reaction was too set? Do you get angry when you're criticized?

Absolutely not. I have no basis for that. It is not a criticism. It's only a position that the new chairman is giving final conditions. It should not be done like this but there is no anger. It was only a statement to go back to reality and start communicating clearly and simply, not in ultimatums – who can and cannot be met or that they will not be an obedient party. It was never like that and never will be. We see Social Democrats as equal partners, but there are proportions. The program of Social Democrats and Farmers is not 50/50, there are more provisions from our election program. Finally, they refused the opportunity to take the social issues, refused this Ministry and exchanged it for the misery of Economy.

President gives no comment on Skvernelis-Paluckas "exchange of rhetoric"

Lithuania's President Dalia Grybauskaitė has dismissed as "exchange of rhetoric" the public...

After rejecting Paluckas, PM Skvernelis found some time for Landsbergis

The Social Democrats will no longer be "easy, accessible and obedient partners who have no...

PM calls on new SocDem leader to 'return to reality'

Prime Minister Saulius Skvernelis says that he does not plan to meet with Gintautas Paluckas in...