Šimašius on Guoga moving to Conservatives and competition with TS-LKD 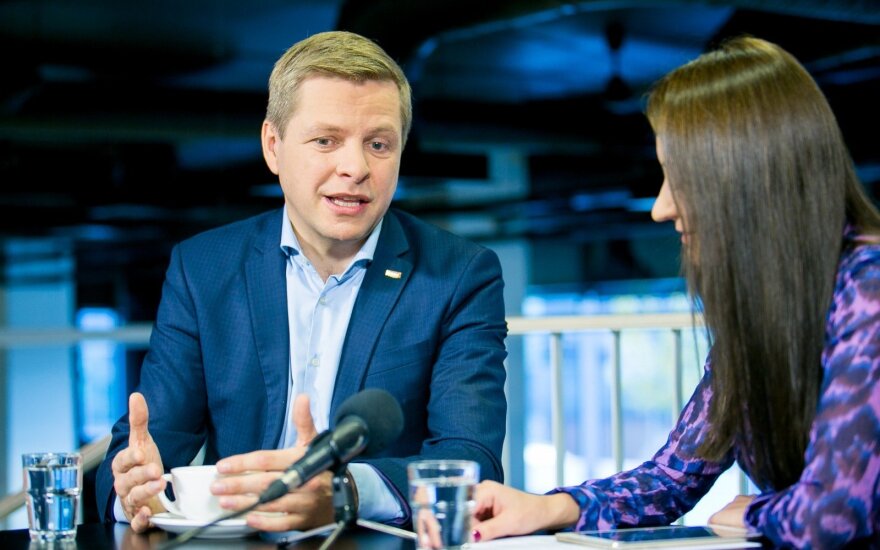 Liberal Movement Chairman, Vilnius Mayor Remigijus Šimašius admits that a year ago and later there were talks of a potential coalition with the Peasant and Greens Union, however the Liberal Movement chose to remain in the opposition due to the incompatibility between the two parties which was uncovered prior to the second round of voting in this year‘s Seimas election.

“Up till then there were attempts at discussion, fairly abstract ones a year or more ago. A little was started. As I’ve said, politicians speak to one another all the time. Truly, a few months ago we would have been unable to pass up the opportunity of working together, but the situation was very different,” R. Šimašius said in a Delfi conference.

Related articles
On Landsbergis and Šimašius‘ conflict
Liberals frustrated with Conservatives – thanks, but no thanks

Complete opposition to the Peasant Greens

Prior to the election, Homeland Union – Lithuanian Christian Democrat (TS-LKD) Chairman Gabrielius Landsbergis often described a vision of a three party coalition – the Conservatives, Liberals and Peasant Greens. The Liberals were not openly against this, but after the election refused to form a common bloc with the Conservatives.

After the second round, which was massively successful for the “Peasants,” but unsuccessful for the TS-LKD, the Conservatives spoke of a coalition with the Peasant Greens and demanded the Liberals be entered into the negotiation as well.

The Liberal Movement, however, firmly denied having anything to do with such a demand. According to R. Šimašius, this Conservative position was not coordinated with the Liberals.
The Peasant and Greens Union (LVŽS) was also unwilling to work with the Liberals. Currently the LVŽS is negotiating with the Lithuanian Social Democrat Party (LSDP).

“Why do we not see any chances of working with the Peasant and Greens Union, who won the most seats? It, by the way, does not want us either and I understand why. Our programme proposals are different in many regards. If we are pro-choice in human rights, they wish to regulate, what is family, women’s right to abortion and other things. Everywhere we see interference with private life. Meanwhile we are the opposite. Speaking of economic freedoms everything is the same. We stress competition, reduced taxation, reduced regulation, while from the victors we hear of more regulation, more monopolies. Naturally there are few opportunities to come to terms,” stated R. Šimašius.

Why did the Liberals not see the Peasant and Greens Union programme proposals and only opened their eyes after the election? According to Šimašius, the programme did not contain any clear and firm proposals, the kind that LVŽS Chairman R. Karbauskis speaks of now. For example the implementation of state-owned pharmacies appears to be a misunderstanding to Šimašius – according to him it is ineffective and won’t help reduce prices.

“Our politics is such that the government interferes everywhere possible. Into people’s beds, into economic relations – interfering everywhere. We want the government to take up a suitable role and resolve that, which it is supposed to. On a national scale – ensuring national and private security, social security and fix the healthcare system, while not interfering with the definitions of family and not creating state-owned monopolies,” R. Šimašius outlined the differences between his Liberal Movement and the “Peasants” as well as the Conservatives.

Why talks with S. Skvernelis failed

Prior to the 2016 Seimas election, the Liberal Movement tried various paths to fortune. It is no secret that the current Peasant and Greens Union candidate to the seat of Prime Minister S. Skvernelis, while he was still the minister of the interior, spoke of cooperation with both the Liberal Movement and the Social Democrats.

Why did things not work out between the Liberals and Skvernelis? “Truth be told, I cannot really comment because I was not the chairman when the talks happened,” admitted Šimašius.
Journalist Kristupas Krivickas, who later joined Naglis Puteikis in forming the so-called Anti-Corruption Coalition, was also close to joining the Liberal Movement. “Let’s put it this way – K. Krivickas understood how to present some things as a proposal,” explained Šimašius.

“Perhaps Krivickas is a good person, but I definitely know he is no liberal,” added the leader of the Liberal Movement, having been unwilling to have the journalist join the party.

Why did Virgilijus Alekna, who almost became a Social Democrat candidate in Vilnius, end up with the Liberals?

“Let us be honest – the Liberals have much in common with other parties, but also many differences. There are people who view themselves as attached to the political left, but they are close to the Liberals because to them the main focus is human rights,” said Šimašius, who highlighted that based on the manobalsas.lt project, V. Alekna‘s responses were clearly liberal.

Relations with the Conservatives and A. Guoga

The TS-LKD and the Liberal Movement are seen as natural partners, but experts stress that in the future the two parties may become competitors, particularly if the Conservatives turn toward liberalism and not Christian democracy.

Regarding relations with the Conservatives, R. Šimašius stressed multiple times that the Homeland Union – Lithuanian Christian Democrat’s stances are often unclear to him, a criticism he levies toward other parties as well.

“I can only with the Homeland Union and every other party to extract just what the party is, what it is for and what it is against, so that voters wouldn’t be buying a cat in a bag, when election day arrives. Today I see such a problem. Where it is not present, it is with the Liberals that you do not have such an issue because you know what you get. You may like some things, dislike other, some like freedom in private relations, no interference on what family is, others perhaps don’t, some like a more liberal Labour Code, others don’t, but in principle everything is clear. Meanwhile in many other parties, Homeland Union included, double signals are being broadcast,” said Šimašius.

The politician believes that this often results in voters waking up after the election and seeing that it is not the party they voted for that has entered power, which he believes is unfair toward voters.
“It is clear that the Homeland Union tried to show that it represents the liberal wing. Did they succeed? Perhaps this is where voters decided. I think they were not very successful. But it is clear that there are those who think in more liberal terms than others,” said the chairman of the Liberal Movement.

Former Liberal, MEP Antanas Guoga entered the European People’s Party (Christian Democrat) fraction in the European Parliament. This fraction contains Lithuanian representatives for the TS-LKD as well. How does R. Šimašius view this?

“I remember how A. Guoga entered the Liberal Movement once and let loose a phrase that “If I were perfect, I would be a Conservative.” That’s how I see it – he must have become perfect and a Conservative,” quipped Šimašius.