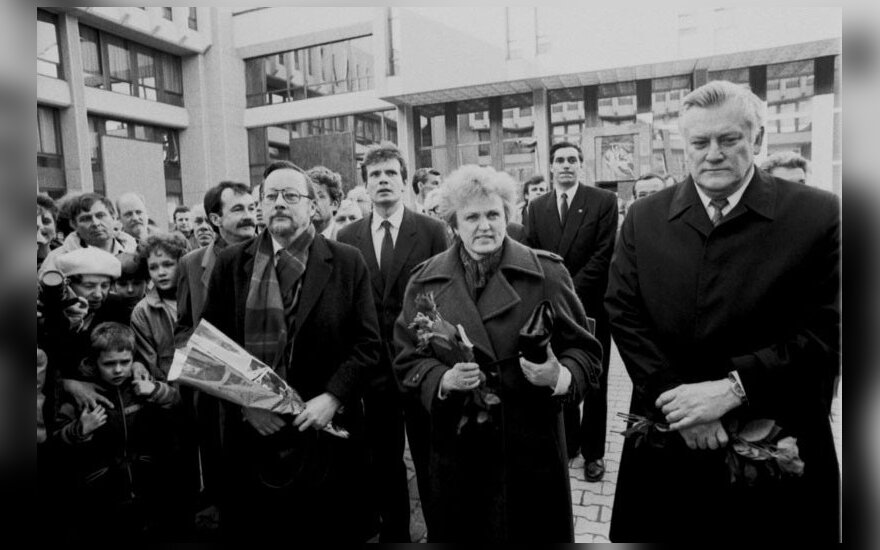 Conflicts in the Parliament between Prime Minister Saulius Skvernelis and Lithuanian Farmer and Greens Union (LVŽS) leader Ramūnas Karbauskis are becoming more frequent. The two main leaders of the ruling majority did not agree on the reform of forest enterprises, and are now arguing for a merger of universities, a national agreement to deal with the emigration is a necessity, the spelling of names and surnames with non-Lithuanian letters.

Tensions in LVŽS are not hidden by other Parliament members as well. Last week, the representative of the Farmers of the Parliament Povilas Urbšys said that disagreements can be promoted by Homeland Union-Lithuanian Christian Democrats, Conservatives but they would not have the opportunity if the tensions weren’t real.

S. Skvernelis and R. Karbauskis disagreements are not new in Lithuanian policy - similar conflicts have already been seen more than once, and they almost always ended with one of the sides in defeat. If this time will be similar in the long run or S. Skverneliui or R. Karbauskiui will have to withdraw.

The first conflict: Prunskienė against the Supreme Council of Landsbergis

The current conflict between S. Skvernelis and R. Karbauskis controlled government by most reminiscent of the first restoration of Lithuania Kazimira Prunskienė the government's relations with the then-Supreme Council Restorative Parliament. That day, less than a year after the start of in the office K.Prunskiene started a dispute with the Parliament of Vytautas Landsbergis.

The conflict reached its peak when the Government and its decision to raise food prices gave an excuse for a group to inspire an unrest, in which an invasion of the Reconstituent Parliament was the main goal. This attempt to carry out an independent policy from the parliamentary K.Prunskiene cost the office, and Lithuania soon had to stand against Soviet aggression organized during January 13 events.

After the conflict with the Movement the Supreme Council controlled by K. Prunskiene did not last long. After implementing the independence of Lithuania, the strong political disagreements were V in the Parliament, which ended in early elections and the ex-communist Lithuanian Democratic Labor Party (LDDP) victory. K. Prunskienė later took command of the current LVŽS predecessor, which, by the way, left the office in the event of conflict with R. Karbauskis.

The latter is blamed for restraint and representation of farmers' hypocrisy with regard to the voters. "Just before the end of the political career, the first Prime Minister has managed to establish a new political force - Lithuanian folk movement, one of whose goals was to get closer to Russia, Belarus and Kazakhstan.

Ex-communists, the Conservatives and the premiere Lithuania

The return of ex-communist LDDP, political power center again slowly began to move into the Government, which since 1993 began to be managed by Mister Adolfas Šleževičius who was called five percent. His reign was remembered by the banking crisis, which ended ex-communist era and formally A. Šleževičius political career burned when it became clear that his assistant, from the Lithuanian Equity Innovation Bank whose activities had stopped, withdrew money. Then, after a long conflict in the beginning of 1996, then president Algirdas Brazauskas submitted a proposal to the Parliament to retire A. Šleževičius compulsorily.

In October of the same year the Parliamentary elections were held where Conservatives and Christian Democrats triumphed, and the Prime Minister chair for the second time went to Gediminas Vagnorius. He, like the earlier K. Prunskienė and A. Šleževičius again tried to consolidate power in the hands of the Government, but its management has been popular in society. G. Vagnorius was opposed on tax policy ideas to compensate for ruble deposits, beginning of the privatization of Mažeikiai Oil, corruption ties and other things.

At the same time Lithuania began to strengthen the other political vector - presidency. In 1998 Head of State elected Valdas Adamkus who gradually began to strengthen his positions and to confront G. Vagnorius. Finally, in February of 1999,V. Adamkus publicly demanded the resignation of G. Vagnorius, which lingered for awhile, but after a few months, admitted defeat and withdrew from the post of Prime Minister.

The sunset and revival of Presidential Lithuania

Soon V. Adamkus and took another step further and after the 2000 Parliament elections successfully formed the "new policy" coalition of liberal Rolandas Paksas and his former rival in the presidential election Artūras Paulauskas "New Union". This marked the golden age of Adamkus and Lithuanian domestic politics.

This period did not last long, and already in 2001, in agreement with A. Paulauskas political power, the center of power from the President's Office returned to the Government of A. Brazauskas. His era of domination of the country continued for five years. During this period V. Adamkus had to gradually move the activity from domestic to foreign policy, it has also been completed by R. Paksas attempt to challenge the state's political system. A. Brazauskas resigned in 2006 after conflicts with Labour Party leader Viktor Uspaskich, when it appeared that the Government can no longer work and making its prospects uncertain. So we can say that A. Brazauskas era of being a Pime Minister ultimately did not withstand the trends of cracking political forces.

Later the duo of Social Democrat Gediminas Kirkilas and Prime Minister Andrius Kubilius, were fact for the Governments’ power reductions and higher centre of gravity to be transferred to the Parliament, which ended when President in 2009 Dalia Grybauskaitė was elected. The latter relationships during the period 2008-2012 reigning Conservative Prime Minister A. Kubilius was ambiguous.

The President did not have her own political force, which could she could lean on in the Parliament but was popular, but A. Kubilius on the contrary - although difficult, however, with the Government and the Parliament, but at that time carried out tax reform, pension and wage cutting, was ambitious to build a new nuclear power plant and was very unpopular. This allowed D. Grybauskaitė, within limits, to press A. Kubilius Government on important issues, and the latter because of the low popularity often had to descend the President will, until 2012 voters returned the Social Democrats to power.

The new governing of leaders Algirdas Butkevičius and D. Grybauskaitė was not as harmonious as the previous Government of times. Although A. Butkevičius, as well as its predecessor, the controlled the Government and Parliament, he had an uneasy relationship with the presidency. The latter is constantly used to find ways to bite Social Democratic Prime Minister of the Government. Nevertheless, the first three years of A. Butkevičius, the Government did not hint to anything wrong - it completed important strategic projects and the country's economy didn’t decline. However, later the Prime Minister began to make mistakes: the Social Democrats began to ride a series of scandals, actualized in topics of rising prices, just before the elections A. Butkevičius rushed liberalization of labor relations project. All this has led to D. Grybauskaite's victory over the competitor.

The new struggle between Parliament and the Government: key lessons

The new peasants' government has been clarifying the same dilemmas that were more relevant to the early independence. So far, S. Skvernelis proposed Government reforms are opposed by R. Karbauskis controlled majority in the Parliament and vice versa - the Prime Minister does not avoid offense for most ideas belonging to the Farmer Parliament members.

Similar to D. Grybauskaitė or K. Prunskienė S. Skvernelis has no anchor in the Parliament - analysts speculated that there mey be about a third of all LVŽS group that is loyal to him, which currently consists of 56 members. On the other hand, as the current president, S. Skvernelis is particularly popular in society: according to a Vilmorus survey in March, he is positively seen by more than 70 percent of voters, alfa.lt reported.

Parliament dominated most majority of R. Karbauskis situation is not unambiguous. R. Karbauskis cannot compete with the nation's sympathy to S. Skvernelis, while he is not so unpopular - it gets about 38 percent of voters, and Farmer party’s rankings are still far ahead of other political forces. On the other hand, R. Karbauskis cannot be sure of the loyalty of his group members, as most of them are not tightly bound to LVŽS, are not party members, do not have a long cooperation with Farmer history, and coalition partners the Social Democrats also constantly upgrading their requirements. In any case, the previous Governments’ action review leads to at least a few conclusions.

Number one, the popularity eases policy options to press their rivals, and the unpopularity complicates the ability to resist such pressure. Unpopular offices of G. Vagnoriaus and A. Šleževičiaus allowed their competitors to change them. A. Kubilius unpopularity did not stop him staying in power, but his relationship with the other part of power - President D. Grybauskaite - was not openly hostile. Today, the country's most popular politician is S. Skvernelis, but it is unclear how much of his popularity is sustainable in the long term.

Number two, errors and unpopular decisions are the most direct path to defeat. K.Prunskiene, A. Šleževičius, G. Vagnoriaus, Rolandas Paksas, A. Butkevičius erroneous or even malignant solutions discredited their offices and mobilized their political opponents. Currently, more mistakes are being done by R. Karbauskis Parliament farmer group, which constantly draws public attention to themselves by strange initiatives, but they can be done by S. Skvernelis himself because the government is closely linked with the outside things, and hence the electorate monetary affairs.

Number three, in the conflict the Government and the Parliament the President's position is important. The evolving role of the President helped parliament to translate the post of state power and the successor to G. Vagnoris, it must be assumed that it had a material impact on A. Butkevičius appearance in the elections. However, so far it is not clear which side President D. Grybauskaitė will take today. Looking at the history of her actions, it is likely she it will support S. Skvernels if he would give up a partnership with R. Karbauskis and converted it into a new coalition with the Conservatives.

How Lithuania's political landscape has changed

Lithuania's political landscape has changed radically since the last time voters went to the polls...

The biggest loser in this Seimas election has been the Labour Party , having failed to pass the 5%...