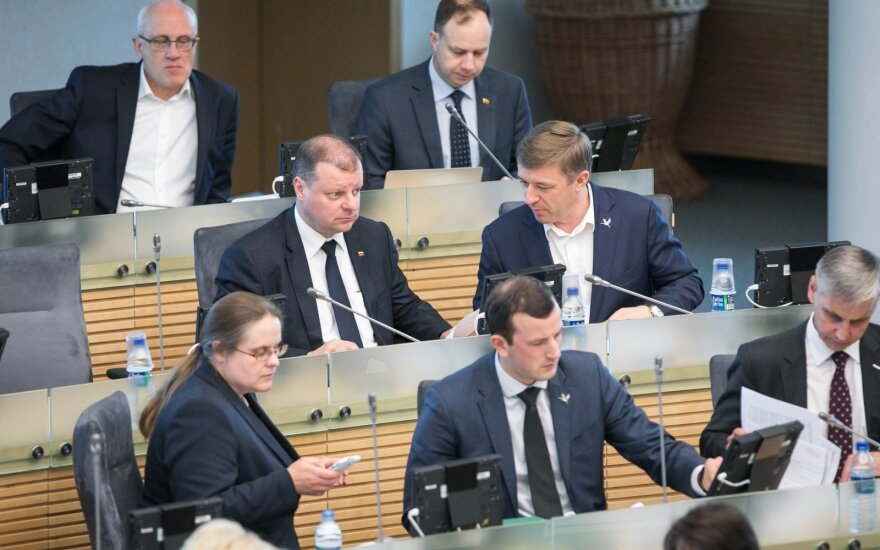 The majority Lithuanian Farmer and Greens Union (LVŽS) group is in a bad mood. With reforms delayed, decreasing ratings and rising divisions, the example of former members who migrated away is becoming ever more appealing. In the near future this may be repeated with another three or four members.

LVŽS group members are not looking forward to the nearing conclusion of the Seimas spring session and upcoming break. In unofficial discussions they admit that for a time now the party leader and group prefect Ramūnas Karbauskis' word holds less authority than before, thus it is becoming ever harder to align opinions and make decisions. This is perhaps why R. Karbauskis is seen in Seimas less and less. There are mentioned that angers are spiking in the group due to the constant lack of tangible results from the cabinet despite continued confidence in Saulius Skvernelis' pledges.

Related articles
A secret “Farmer” meeting in Seimas – a rebellion against R. Karbauskis?
Karbauskis’ vision: strengthened workers will be more in charge of their wages

Another source of discontent is the decline in LVŽS ratings. There are concerns that the party will suffer the same fate as Arūnas Valinskas' National Resurrection Party. In 2009, after a good half-year, said party lost its ratings and collapsed following internal disputes. Furthermore the case of Dovilė Šakalienė who left the LVŽS group last week may prove to be contagious.

According to Lietuvos Žinios sources, some LVŽS group member have already stated looking where they could find shelter after departing the "farmer" ranks. The opposition Homeland Union – Lithuanian Christian Democrats (TS-LKD) ranks are named as the most appealing option. Some "farmers" have already come to agreement with the group's leaders and will begin the autumn session in the conservative ranks. Others find the mixed Seimas group more appealing, where the first LVŽS "migrant" Bronislovas Matelis has been working since January.

The TS-LKD leader and Seimas group prefect Gabrielius Landsbergis did not hide that certain discussions, according to him at the initiative of "farmers" themselves, are happening. "However we are not luring anyone ourselves. Our doors are open and we have much goodwill," he told Lietuvos Žinios.

Furthermore if the breakdown of the LVŽS were to occur, according to the politician the ones to hurry to the TS-LKD first would be those to win. In such a case they could be offered posts in Seimas committees or commissions, later – in electoral districts.

The increase in size for the TS-LKD group would benefit the Conservatives – G. Landsbergis could become opposition leader. He is lacking only one or two more votes for it.

One of the LVŽS members who, according to Lietuvos Žinios sources, could migrate to the Conservatives is Raimundas Martinėlis. "Life is varied. You can never know how things will develop," the politician remained reticent on his future plans. During the Seimas elections he participated as an independent candidate. "I am independent from any party affairs," Martinėlis claims.

Currently he is creating a civil movement in Rokiškis, his electoral district, and is not thinking about any party, albeit admitting that he is of more liberal views, even if he sees good ideas both among the Conservatives and Social Democrats.

The prefect of the opposition Liberal Movement group Eugenijus Gentvilas admitted he has heard there is discontent among the "Farmers". "But we are not talking to anyone. Truth be told, I do not even know whether we want to accept the discontented ones. Such things should not happen automatically, we should seriously discuss it," the liberal stated. Things progressed faster with D. Šakalienė because, Gentvilas explains, the decision to offer her a place in the Liberal Movement group was made already at the beginning of term.

LVŽS group member Povilas Urbšys assured that the situation in the group is normal. "Yes, there are differing opinions, but this does not grow into conflict that could be viewed as fracturing. For now I see no signs of it," he told Lietuvos Žinios.

On the other hand the politician also believes that the intentions of some group members to spread their wings is a normal process. "There are never monolithic groups in Seimas. Furthermore the LVŽS group was formed based on the principle of values and competences, not a party. A large number of its members are not party members," Urbšys reminded.

He cautioned that the problem of "migrants" may become more acute with the Seimas elections nearing. At that point those who entered the "Farmer's" ranks for political benefit "may want to go to other groups that would ensure them a certain political stability."

So far two people – B. Matelis and D. Šakalienė, abandoned the LVŽS group, while Greta Kildišienė relinquished her Seimas member mandate due to a scandal. According to P. Urbšys, the group's members have reacted to the party's falling ratings very differently. "Some think that this is how it should be and I agree with this because reforms always antagonize the public, particularly with entrenched problems. Others are concerned with the ratings," P. Urbšys explained.

Nevertheless, according to him, it is important to adhere to one's program when enacting reform. "We formed our identity to voters as one of a socially sensitive and based on traditional values power. If we are to retreat from the program in certain questions and try to liberalize it, it will nevertheless be a problem," the politician said. Supposedly if the LVŽS yields to liberalism, voters will punish the "Farmers" even more than the Conservatives and Social Democrats.

A secret “Farmer” meeting in Seimas – a rebellion against R. Karbauskis?