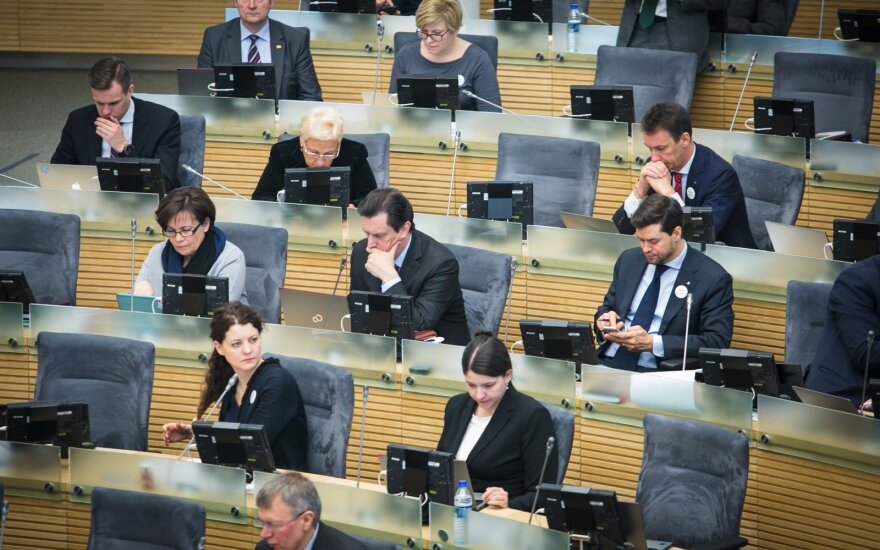 The first hundred days of the new Seimas which sparked hopes for change have been marked more by scandals and not by work. However political scientists note that three months is too brief a time period for the new Seimas to show its true face. Nevertheless some of its traits are already causing concern Lzinios.lt reported.

With Seimas concluding its romantic initial work period, it will have to face the reality of life in March. Experts believe that the parliamentarians will reveal themselves in all their glory when Saulius Skvernelis’ cabinet’s legislative projects reach the Seimas plenary session hall at the beginning of the spring session. A lack of them has so far not allowed either the coalition – the Lithuanian Farmer and Greens Union (LVŽS) and the Lithuanian Social Democrat Party (LSDP), or the opposition to present themselves.

Related articles
Why are the Social Democrats fighting forestry reform?
Landsbergis no longer needs the post of opposition leader, he has other plans

A coalition without a strategy

According to Vytautas Magnus University professor Lauras Bielinis every new member of Seimas and cabinet has to understand their new role, acclimatise and arrange mutual competences and interests. Thus it is hardly possible to demand Seimas to work effectively from day one. “A different question is what can we expect afterward? The core problem of the majority is that it does not have any real strategy. There are several statements that sound like principles, however the path to implementing them is undefined, the methods to achieve goals are unclear. The same goes for the resources to be used in implementing the plans,” the political scientist told Lietuvos Žinios.

According to him effective actions by the Seimas can only really be expected from autumn.
L. Bielinis did not dismiss the possibility that the current majority could collapse. According to him the Social Democrats have already sent such a signal. “Truth be told the LSDP has been side-lined in this coalition, you could say that their role is to guarantee a majority in votes. Can their place be taken by someone else? Theoretically – yes. However talks about the Conservatives, who would like to somewhat near the “Farmers” are actually premature. For now the Conservatives’ hints at supporting the cabinet are just at the level of public relations,” Bielinis said.

He noted that the largest Seimas group, LVŽS, may not avoid breaking apart either. “We can see two clearly defined groups. One’s representatives gather around S. Skvernelis, the others’ – around Ramūnas Karbauskis,” the political scientist said. He notes that the situation in the LVŽS depends on how the two leaders manage to align their personal principles and the two groups’ programme interests.

Vilnius University Institute of International Relations and Political Science professor Tomas Janeliūnas notes that it was expected that having propagated such grand ideas, the Seimas will immediately take up implementing them. The Seimas did manage to efficiently create a new cabinet and confirmed the new budget fairly smoothly. “The start was fairly good. And if not for the scandals which attracted public attention it would be possible to say that the Seimas started work fairly smoothly. Particularly given that the majority of the members of Seimas are newcomers,” Janeliūnas stated. He predicted that the greatest challenges will hit the parliamentarians when the time to pass cabinet presented projects comes. At that point both the majority and the opposition will be on full display.

The political scientist said that he currently sees no signs of the coalition breaking apart. “The Social Democrats are invisible, however they understand their situation themselves. First they have to resolve their internal issues. Only then, when the LSDP elect their chairman, will we see whether the party has a programme that can make it more notable,” the expert said. He also does not believe that the opposition Homeland Union – Lithuanian Christian Democrats could be aiming on embarking the majority boat.

“The Conservatives are currently better off criticising and waiting for the LVŽS to slip up. On the other hand the TS-LKD have no reasons to criticise the cabinet which they partially view as separate from the Seimas majority,” Janeliūnas noted. He warned that the TS-LKD leader Gabrielius Landsbergis expressed support for the Skvernelis cabinet’s projects. Perhaps the Conservatives hope that even being a part of the coalition government S. Skvernelis will “be able to balance or create a counterweight to R. Karbauskis and his initiatives”.

Political analyst Rimvydas Valatka pointed out that this Seimas, particularly the “Farmers” promised far more transparency and professionalism. “However the most ardent professor of this, Ramūnas Karbauskis, has, in essence, not demonstrated it. There were so many lies that sometimes it was awkward for the liar themselves. Overall the word “value” is devalued in Lithuania. In my village they used to say – if a person always talks about something, that means they do not have it, it is their most painful place,” he spoke.

According to R. Valatka, 60-70 of the current members of Seimas have no idea what political work is and upon seeing a journalist – flee. “Around the world politicians who see a journalist try to approach them. Our members of Seimas will also understand this over four years, but this is time lost for Lithuania. Seimas should not be primary school, primary political education should be obtained before arriving,” Valatka said. He expressed concern that this Seimas is unlikely to be able to prepare for 2020 when Lithuania will have to begin living without EU funding.

“Seimas should be only thinking about how to improve business conditions, so that Lithuania would become a money producer and not a spender. However currently everything is linked to certain pharmacies, warring with wining and preaching. This is not how money is found. The most important thing is to put the economy in order and ensure that Lithuania would be a cosy place to live. Prohibitions, preaching and claiming that everyone is an alcoholic, this will hardly contribute,” R. Valatka said. He predicted that the “current map of Seimas” may hold to the end of the term. “It will all depend on the rate of maturing. Looking at many of the “Farmers”, it does not appear that they would be capable of rapidly learning. If they cannot do so, then we shouldn’t expect any big changes in the majority either,” the analyst said.