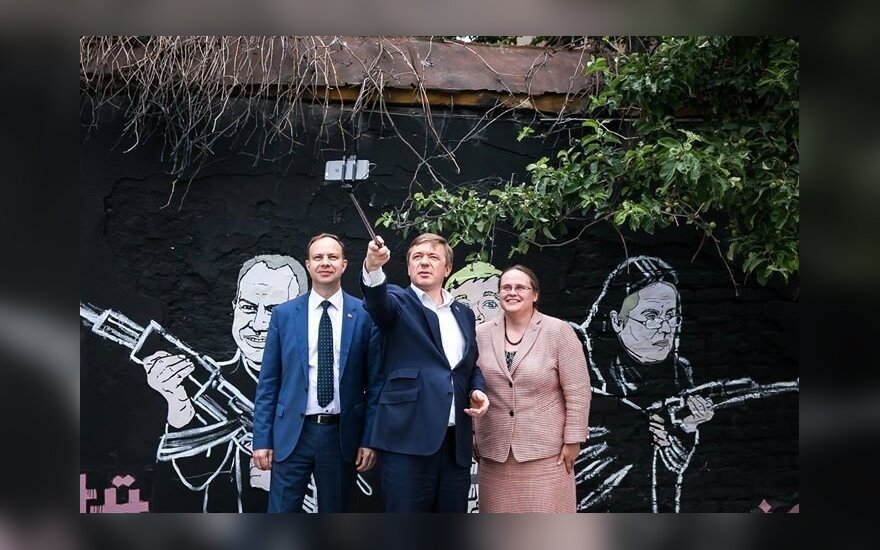 Over the half year since the Seimas elections, the Lithuanian Farmer and Greens Union (LVŽS) ranks increased by a little over a hundred new members, however a third of the largest Seimas group remain non-partisan. Political scientists explain that this situation is currently favourable to the party leadership, but bears risks Lietuvos žinios reported.

With eight months in power now, Ramūnas Karbauskis' "Farmers" appear to see party affairs as secondary. The LVŽS expanded only a little. According to official data, since October last year to March this year, the party expanded by only 111 members. Only a few of them are members of Seimas who had maintained a non-partisan status in the "Farmer" Seimas group.

The Seimas LVŽS group started off with 58 representatives, with 25 of them also being LVŽS members at the time. In January this year, the number of party members in the group expanded by seven more parliamentarians. Furthermore, during the party congress where R. Karbauskis handed the new members their member certificates, he spoke of "party building", strengthening the branches, preparing for the next election and attracting new people.

However this year there have been no more group members joining the party proper. This was confirmed to Lietuvos Žinios by group prefect R. Karbauskis. "So far there has not been an event during which we could urge those who have decided that they would join and that we could accept them. There have been no further encouragements. When the opportunity presents itself, we will address the group members, remind them, ask if any wish to join the party," he said.

Having spoken already in January that he "really wants many to want to join the party," R. Karbauskis now explains that the LVŽS is careful in its member selection, which is why their numbers are so small. Furthermore, according to him, the party does not provide any privilege or protection to its members, does not employ them. Supposedly this could lead to a comparably small member count.

Off by several hundred

Based on data by the Ministry of Justice, on March 1, 2017, the LVŽS had 3790 members. Comparing with the data from October 1, 2016, this is an increase of 111 people. That said, at the end of spring this year the LVŽS presented the Central Electoral Commission (VRK) with an explanatory statement claiming that at the end of 2016 the party had 4014 members.

The Ministry of Justice reviews party member lists relative to the data of the Citizen Register and data from other parties, thus it is justified to rely on specifically the ministry's data. This is how R. Karbauskis responded about it – "Our party member count changes and rises based on specifically people, who are truly idealists and want to work for the country and not themselves."

Of the parties in Seimas, only the Polish Electoral Action in Lithuania – Christian Families Union has fewer members, totalling 2182.

LVŽS has delegated influential heads of Seimas committees and a number of ministers, who have still not signed on with a party. An exception is Virginijus Sinkevičius, who leads the Seimas Committee of Economics. He joined the party at the beginning of the year and became the deputy prefect of the Seimas group a few months later.

"I can work for the group without being a party member. The group benefits from having non-partisan members. I am not considering the possibility of joining the LVŽS, but this is not insurance or wishing to avoid something or receive something. Loyalty to the group or party is not measured in party certificates. I am not fleeing responsibility in this question," argued A. Širinskienė.

LVŽS group member Stasys Jakeliūnas, last term the advisor to the then Prime Minister, social democrat Algirdas Butkevičius and now the head of the Committee of Budget and Finance, also admitted he currently has no plans of joining the party.

"I have not had a party certificate before, do not have one now, nor any intention of joining. I do not recall anyone clearly and directly proposing to do so. Yes, there were general talks and thoughts, but no specific proposals from either me or the party," S. Jakeliūnas told Lietuvos Žinios.

Secretariat without a head

Every party's finances, organisation of activities, procurement affairs and employment is typically handled by the executive secretary. It is thought that all political powers must have this post. The LVŽS is exceptional in this regard. The post is outlined in its bylaws, but the position remains empty. Based on the LVŽS bylaws, the executive secretary should head the secretariat, but it has neither a leader, nor staff.

It is exactly the executive secretary, according to LVŽS bylaws, that manages the party member register. "We are working fairly well without this position. Currently we definitely do not have the funds to hire [an executive secretary]," R. Karbauskis explained to Lietuvos Žinios.

The LVŽS management, it would appear, is satisfied with the current situation and is not paying much attention to more active party activity due to it. Furthermore the party did step into the elections with the slogan of non-partisan professionals.

Vilnius University Institute of International Relations and Political Science professor Tomas Janeliūnas stressed that the LVŽS activity centre has shifted to the Seimas, thus there is an unsurprisingly reduced amount of attention to the regions and party structure. Furthermore the LVŽS management did not declare it was seeking to turn into a mass party. According to Janeliūnas, the party was not inclined to accent partisanship during the elections either.

"Member counts do not necessarily indicate a party's political capacities or perspectives. With a rising member count It becomes harder to control them, diverging positions increase, it takes more time and resources to consolidate them. It could be that is what the party leadership wants to avoid. It is inclined to demonstrate personal leadership, concentrate party control in few hands," mused T. Janeliūnas.

On the other hand the fact that more than a third of the LVŽS group members do not belong to the party is testament of a certain caution. "Their separation from the party indicates an unwillingness to declare loyalty to it, they maintain a freer opportunity to depart the group and join others, as they are less constrained than party members. Thus the LVŽS group retains a significant risk factor," the political scientist predicted.

While the functioning of a party organisation is an important factor during elections, sometimes even the most numerous forces of members, branches and secretariat may not be enough to win. For example the Labour Party could boast of a well-developed number of branches, large number of staff, but lost in the last Seimas elections.

Member counts for parties in parliament

The popularity of Lithuania's Prime Minister Saulius Skvernelis and his government is declining, shows...

Benefits to both city and countryside: are the Peasants applying double standards?