Seimas bulldozing in obligations for business 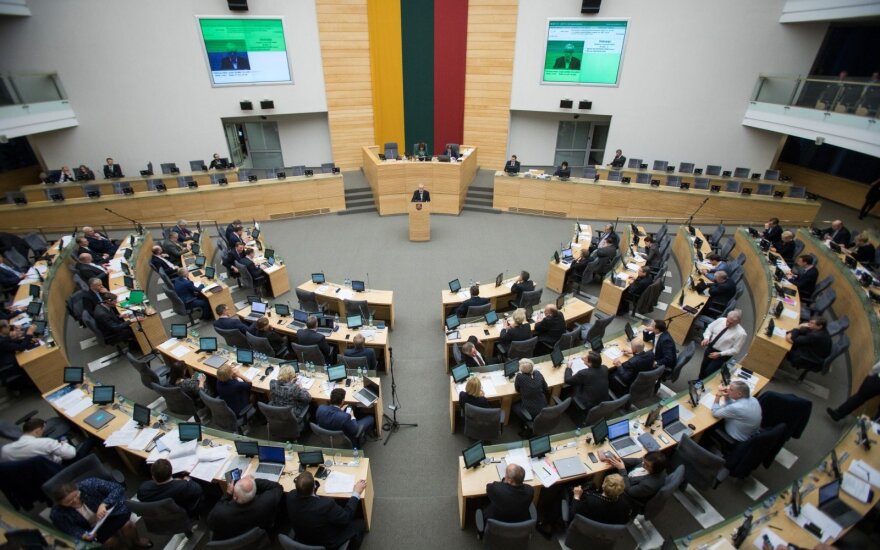 The answer to the question whether Lithuanian politicians wish to interfere with the business transactions of private companies is becoming clear. The Seimas Committee of Economy voted for the strategic company regulation legislative project to retain the companies Achema, Orlen Lietuva and Telia Lietuva. The document which may oppose the Constitution and European Union law is to go to the Seimas plenary hall, Lietuvos Žinios writes.

The Seimas committee supported the companies and equipment of strategic significance to national security, as well as other companies of import to national security legislative project. The new minister of economy, former Seimas Committee of Economy chairman Virginijus Sinkevičius expects the legislation will be passed in parliament already in this autumn session which has been extended to January 12.

According to these amendments, three private companies – Achema, Orlen Lietuva and Telia Lietuva are identified as companies unto which the state can apply special oversight just as to strategic state companies. A government commission will be able to review all business transactions (halt them or influence them) which exceed 10% of the company's income.

Minister of Economy V. Sinkevičius will present the legislative amendments in the Seimas plenary meeting. Several weeks ago he presented an amendment to scrap reviews of private companies, but since changed his opinion. Nevertheless the minister did not change his earlier attitude that the legislative project is weak. MP Virgilijus Poderys has also observed the project is poorly prepared. He also stressed this at the Seimas Committee of Economy meeting. The MPs hope that the poorly prepared project will be improved by the Seimas. "The legislation was prepared poorly, but it is necessary. After long discussions proposals were approve which are acceptable for both businesses and the State Security Department (VSD). Let us not forget that this is just the opinion of the Seimas Committee of Economy, the final decision will have to be made by Seimas," V. Sinkevičius said after the meeting.

The minister withdrew his proposal for the requirement for private companies to provide information on transactions which exceed 10% of their annual income to be scrapped. The requirement remains in the project, as well as the possibility for a commission formed from various state institutions to object to such a transaction and finally, after various delaying procedures – to halt it.

Lietuvos Žinios has written a number of times that due to the officials' right to interfere with the transactions of private companies, they may experience massive losses, take the matters to court and if it turns out that the transaction was halted without justification, the state would be fined, with the fines being financed by tax payers.

"The State Security Department excellently presented arguments why those companies remain on the list. Currently it is a limit of 10%, but those percentages can be reviewed when passing the legislation. There is a requirement by the OECD to pass strategic national security company legislation. The OECD delegation visited Lithuania and emphasised the importance of passing such legislation," V. Sinkevičius explained.

Gas and fertiliser to blame

In an earlier Seimas Committee of Economy meeting, a VSD representative revealed that Achema is under extra scrutiny because the company is a major consumer of natural gas. Neither the minister of economy, nor the VSD representative explained to what extent this is linked with Achema's commitments to contribute to the maintenance of the liquefied natural gas (LNG) terminal.

The trade unions also have the opinion on these regulations. "Perhaps it is a desire to ruin the fertiliser production business in Lithuania?" the chairwoman of the Achema employees' trade union Birutė Daškevičienė said. She was uninclined to seek conspiracy theories, just inquired whether the MPs setting further commitments for Achema have considered the roughly two and a half thousand citizens of Jonava town and region, who will be directly impacted by the decisions to halt or freeze the company's transfers.

"We are completely opposed to politicians holding control of transfers. If they suspect that a deal may harm national security, the company will no longer be supplied with raw materials. This means that 2500 employees will lose their jobs. The whole town of Jonava and its region depend on the results of Achema. If things are going well for Achema, things are going well for its employees," the trade union chair emphasised.

She also highlighted that trade union positions suffer when the company is burdened with further commitments. "Every time when costs for the LNG terminal maintenance are raised, we are unable to obtain conditions for salary increases for the staff. And the staff are greatly discontent," B. Daškevičienė said. According to the trade union representative, the staff are not going to silently watch the Seimas bulldoze in legislation they disapprove of. "We will discuss it yet, but we are prepared to gather at the Seimas and express our position. We do not know what this legislation aims for. Perhaps it aims to press us to seek other employment?" the Achema staff trade union chair mused.

A project that may spark disputes between neighbours