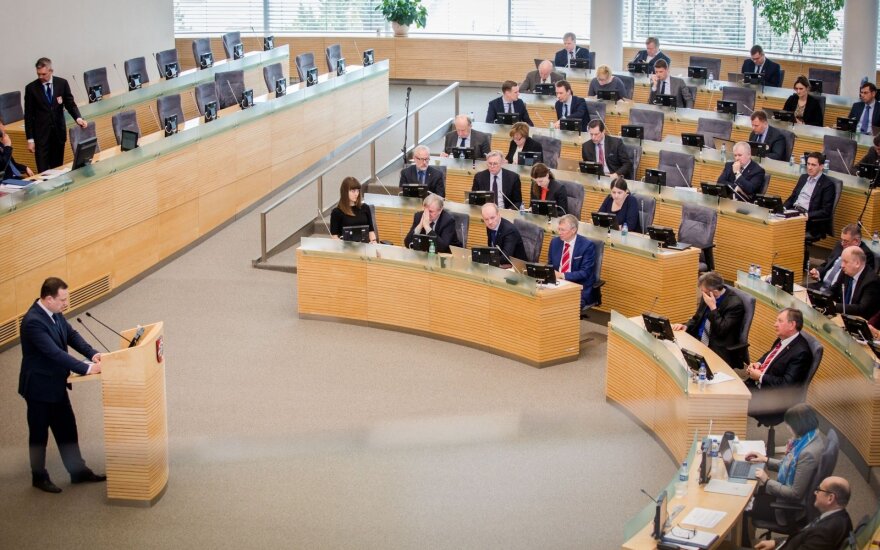 Party representatives vigorously call to investigate suspicious activities of their opponents, but when their own colleagues are sinking in suspicions and scandal begin to consider that perhaps the opponents are trying to cover up their own problems and suspicious activity by the problems of others.

"Recently, the Parliament formed a majority on certain issues and is escalating them. Who could deny that liberals seek noise, which would cover their legal process? For me it looks strange when the National Security and Defence Committee votes on Mindaugas Bastys ties with the criminal world representatives and representatives of the political parties, whose leaders or former members of the groups allege, vote confidently as if nothing happened, "- outraged MP Juozas Olekas who is a Social Democrat.

At that time, one of the Liberal leaders, Anticorruption Commission of the Parliament, leader Vitalijus Gailius asks maybe his Liberal colleague Gintaras Steponavičius accusations for allegedly illegally obtained financing is linked to attempts to cover up the governing bodies problems?
J. Olekas also notes that, by initiating impeachment of his fellow party member M. Bastys, very actively manifested not only in the Liberal and Conservative representatives, but also the ruling coalition partners, "farmers".

Moreover, after the National Security and Defence Committee, which had the status of the Special Commission, supported presented accusations for M. Bastys of dangerous state of communication with the representatives of the Russian energy and the criminal world players, the chairman Viktoras Pranckietis suggested that the investigation has to be continued and explanations from Social activities.

The Social Democrats will seek the truth

When asked whether the Parliament Social Democratic Party group determined to defend M. Bastys, J. Olekas claimed that primarily truth should be sought.

"We encouraged him that, if guilty, let him take responsibility. But for the facts that have been presented to the committee, it is possible to conclude that some of the links are doubtful, but they are no match for the operation against the interests of the state ", - said J. Olekas.

He criticized V. Pranckietis initiative to continue the investigation - perhaps even the creation of another commission - on the other representatives of the Social Democratic activities.

J. Olekas is convinced that similar studies need to be initiated on the other parliamentary parties: "But does this have to be done y the Parliament? If there is suspicion of unauthorized communication between party representatives, or acts, that such things should be interested in law enforcement, but no MPs."

The scandal covered up by other scandals?

The MP, the party‘s Order and Justice chairman Remigijus Žemaitaitis in Wednesdays testimony on Kestutis Pūkas activities of the Seimas Commission, marvelled that ought to talk about things that are not seen or heard.

"When the noise was on K. Pūkas treatment of women, I have suggested to him to leave the group and think about wanting to retreat from Parliament. He explained to me that he did not harass them, but the presence of women talked. That I was able to tell the committee, but I do not understand why I have been questioned about what I do not know. Why then not invite the commission to interview the mayor of Kaunas Visvaldas Matijošaitis, who had strict statements on K. Pūkas and made it clear he had some information about it? Why not invite a journalist, who has done research about his behavior? "- discussed R. Žemaitaitis.

He was annoyed that the Parliament, instead of addressing sensitive problems of the country and adopting important legislation, engaged in endless studies that have nothing to do with what the government parties promised before the election.

"Why nobody cares about the firefighter problem? No one sought to find out why the Constitutional Court's decision of 2013 on the salaries of medics is not carried out. Nobody talks that today district hospitals are being closed or how in the future pensions will be calculated and paid. One gets the impression that M. Bastys and K. Pūkas inflated scandals are usefull to someone. Based on them, impeachment should be initited and to Andrius Kubilius, and Ramūnas Karbauskis for being wrongly declared of car use ", - said R. Žemaitaitis.

He also said he had a suspicion that the liberals themselves seek to sway with M. Bastys and K. Pūkas related scandals that hidde their own problems in connection with allegations of bribery with the former leader Eligijus Masiulis and is now raising the fore the scandal on G. Steponavičisus related business activity.

"I find it also very strange that the Commission's findings on K. Pūkas activities required to provide to the Parliament already before the 1st of May. After all, even the prosecution cannot solve cases so quickly ", - discussed R. Žemaitaitis.
|
"Farmers" - innocent

"The information about the behavior of K. Pūkas behaviour with women, with „MG Baltic“ concern TV is involved. It is perhaps possible to assume as liberals themselves are trying to cover up? But What the farmers have to do with it?" - wondered "farmer" Parliament spokesman Povilas Urbšys.
He said he tends to believe that the various conspiracy theories are absolutely illogical and unreasonable. According to P. Urbšys, it means that the State Security Department issued M. Bastys permission to handle classified information, that is hidden under the liberal shaken scandals and concern „MG Baltic“, sent journalists to create reports for the benefit of the Liberals and even peasants.

Liberals have their own suspicions

"And we just thought that G. Steponavičius scandal was thrown out so that it would cover the investigations into K. Bastys and M. Pūkas. I no longer understand the conspiracy theories, "- said members of the Liberal Movement group Eugenijus Gentvilas.

His colleague V. Gailius recalled that the investigation into the activities of M. Bastys were initiated by the leader of the Parliament, the farmers representative V. Pranckietis and liberals had no initiative on this issue.

"Maybe in the time the scandal emerged, everything was vice versa? Maybe G. Steponavičius scandal is required in order to underevaluate M. Bastys and K. Pūkas history? But I have nothing to do with all those stories and just try to carry out their work ", - assured V. Gailius.

The Lithuanian Social Democratic Party (LSDP), the junior partner in the ruling coalition, will not...