BNS EN
aA
On the 9-year anniversary of the Russia-Georgia war, Georgia's then leader Mikheil Saakashvili said in Vilnius that Belarus would be Moscow's next target. 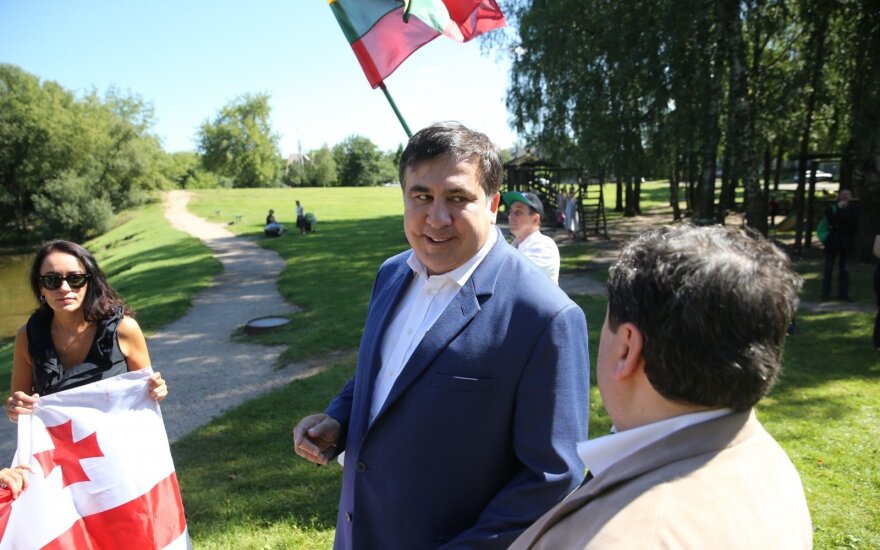 "I believe Russia is preparing to take over and annex Belarus," Saakashvili said in an interview to BNS in Lithuania.

In his words, NATO currently views the Moscow threat more realistically, therefore, the threat the Baltic states are faced now is smaller than it was a few years ago, however, the risk of betrayal on the side of the Western world remains.

Saakashvili, 49, is currently a person without citizenship. He had his Ukrainian citizenship revoked by Ukraine's President Petro Poroshenko last month. Saakashvili told BNS that the Ukrainian president took the step in fears of his growing popularity.

BNS: Do you expect Lithuania and other EU nations to put pressure on Ukraine authorities regarding your citizenship?

Saakashvili: The only thing I am asking for is not put pressure on Ukraine but allow me to go back and defend my rights in the court. There are so many materials that even in the Ukrainian court, which is fully controlled by Poroshenko people, it's very hard to protect his decrees. It was based on fake signatures, it was based on fake premises, it was against Constitution, it was against laws.

I want to go to Ukrainian court to defend my rights, that's all I am asking for, and Lithuanian foreign minister already supported this. He said that I should be given right to go to Ukraine and defend myself in the court.

BNS: What do you think was the real reason for Mr. Poroshenko to take your citizenship?

Saakashvili: The real reason is that I become too big of an opponent. His popularity is very low, my popularity was rapidly growing. Together with other opposition leaders we start to find common grounds. No person since Yushchenko campaign or early before his presidency had gathered so many crowds that I gathered in Ukraine lately, lots of public support. And he got nervous, he got jealous and he decided in this way to get rid of his opponent.

BNS: After Russian invasion of Georgia, an anniversary you marked today by Russian embassy in Vilnius, also after Crimea annexation some politicians and observers expressed concern Baltic states could be next, if Russia is not stopped. Do you see now a threat for the Baltic states?

Saakashvili: Yes, of course. What Ukraine has done very heroically, Ukrainian soldiers, they stopped Russians, contained them in Donbass. If that had not been the case, I think the Baltic countries would be directly under threat. What we see now in Belarus, I think Russia is preparing for takeover and annexation of Belarus. The military exercise will bring in infrastructure... so the threat is not gone, the threat is growing. I think just for time being Ukrainians contained this threat on their borders.

BNS: Do you think that the NATO presence is enough in the Baltic states?

Saakashvili: I think more now than several years ago. I'd say in 2008 NATO wouldn't have done much to protect the Baltic countries but now I think they are more aware of the Russian threat and so I still think Russia cannot get away. They're more and more aware who Russians are.

The problem is that Article Five exists but there was also obligation to protect Poland during World War Two but it didn't work. So we know there is a long history of betrayal by the Western countries, on the other hand, now they have their own issues with the Russians, so I think Baltic countries are at better situation than a few years ago.

BNS: My final question: what are your personal next steps now, where are you flying and when are you returning to Ukraine?

Saakashvili: I am now touring Europe. I am leaving Lithuania today, but I am going to several European countries and then I am preparing together with my supporters for return and for my day in Ukrainian court. It will depend upon the judicial terms, so when I should go to the court and when the session will be appointed, and then I together with my supporters members of parliament and members of Ukrainian public go back to Kiev to to fight in the court.

Saakashvili came to power in Georgia during the 2003 Rose Revolution, which overturned earlier president Eduard Shevardnadze, formerly a foreign minister of the Soviet Union.

He was praised for conducting modernizing reforms during the decade in power, which brought Georgia away from economic downturn and curbed deep-rooted corruption, however, his actions during the 2008 war with Russia are viewed controversially. After the fighting, Russia recognized independence of the breakaway regions of South Ossetia and Abkhazia, bringing in troops, however, the remaining international community views them as occupied territories of Georgia.

Saakashvili was forced to leave the country in 2013 after prosecutors issued an arrest warrant, accusing him of abusing his powers.

He supported Ukraine's pro-European revolution of 2014 that overturned Russia-supported president and turned Ukraine in the direction of the West. He served as Odessa governor for 18 months but resigned last year, stating he was being held back from fighting corruption.

In the past months, disagreements between him and the circle of Ukraine's president, Poroshenko, heightened. He was often accused of excessive political ambitions.

Georgia's former president Mikheil Saakashvili said in Vilnius on Tuesday he would not apply for...

A protest action against occupation of Georgia's territories was held in a square in front of the...

More than half of respondents in the United States think that the US should send troops to defend...

President Dalia Grybauskaite on Friday congratulated Ukrainians on the start of visa-free travel to...