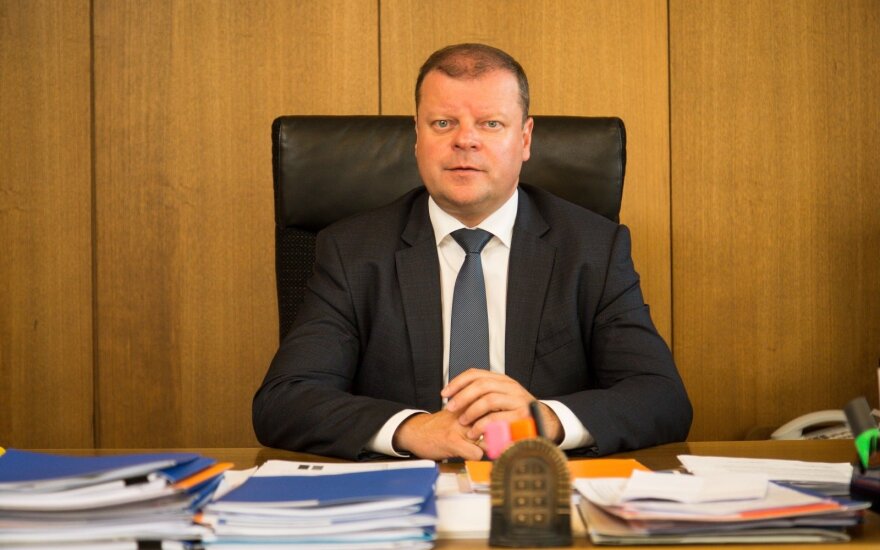 Prime Minister Saulius Skvernelis' ratings are plummeting because he is not fulfilling the Farmer Greens' pledges to turn to the people, states Mykolas Romeris University docent, political scientist Virgis Valentinavičius.

Meanwhile the Prime Minister's advisor Skirmantas Malinauskas pointed out that maintaining popularity is a difficult task for all Prime Ministers.

"We can take a look at the heads of former cabinets and among the former Prime Ministers few managed to take wins in single mandate districts. Of course some of them chose difficult single mandate districts, but the trend is rather clear – when you enter power you sometimes have to make unpopular decisions, certain limitations appear, while the people wait for fairly rapid and easy decisions," S. Malinauskas said on Thursday during a discussion on the Žinių Radijas show Atviras Pokalbis.

The PM's advisor compared the situation over moods in the society to a family.

"This is like a family where the children await candy from the father, but when the father comes, he says they should wait for it and that he needs to make sure there is enough money for the candy and perhaps they should start by getting the kids shoes. The children begin thinking that perhaps things aren't as good as hoped," S. Malinauskas said.

"I wanted to propose to talk about today's weather which appears to have more optimistic prospects than the Prime Minister's ratings which are plummeting downward. If Vladas Gaidys [a prominent sociologist] suggests drawing a line, then around the presidential elections those ratings should be completely negative. Currently there is still one surprising thing, it is that there still are fairly numerous positive ratings despite the negative ones rising dramatically," V. Valentinavičius spoke.

The political scientist highlights that when comparing the three most recent heads of cabinet, conservative Andrius Kubilius never was popular – not before, not during and not after the elections. "People simply don't like him," V. Valentinavičius, who has worked on A. Kubilius' team, said.

Meanwhile social democrat Algirdas Butkevičius, the political scientist points out, was popular for three and a half years, no matter what he did.

"People do not evaluate based on "love – don't love", but based on what is actually being done. A. Kubilius was forced to tighten belts and save the country from an economic crisis. He did it at the cost of popularity he never had. He did not become more popular through his tenure as Prime Minister. Butkevičius simply did nothing for 3.5 years and was fortunate that the economy stabilised and grew, it was possible to reap benefits at the cost of the previous government," V. Valentinavičius said.

According to the political scientist, A. Butkevičius' troubles began due to the Vijūnėlė Manor scandal and the Labour Code.

"Vijūnėlė displayed that cabinet's lordly style, that these are lords who care not about the people, only their palaces. The Labour Code is the second issue," V. Valentinavičius said.

According to him, S. Skvernelis' ratings are declining due to the policy being implemented – "breaking the primary Farmer and Greens pledge to turn to the people".

"In implementing "Farmer" and Ramūnas Karbauskis' policy, one could claim he is R. Karbauskis' protégé, so S. Skvernelis should theoretically be implementing policy which turns to the people, but practically he is doing the opposite," V. Valentinavičius said.

He bases his position on the example of the Labour Code, which he notes passed only with cosmetic changes.

"This way S. Skvernelis is continuing the policies implemented by A. Butkevičius in his last half year. What the Labour Code is, one of the main major business lobbyists Valdas Sutkus has clearly stated: the Labour Code is prepared scientifically, we took metrics from Doing Business and arranged the Labour Code so that it would be better. It is not based on some document called "Doing Welfare", so namely not improving people's welfare, but improving business conditions," V. Valentinavičius said.

The expert believes that the major moments of S. Skvernelis' policy linked with the Labour Code and tax policy are business oriented.

"This is why the people are punishing him and I believe they are justified in it," V. Valentinavičius said.

Not a protégé of R. Karbauskis

Political analyst Tomas Dapkus does not agree that S. Skvernelis could be R. Karbauskis' protégé.

"After all the scandals going on with Mr. Karbauskis, his melodrama regarding Greta Kildišienė and others, it is a question who has more influence in the Seimas group, Seimas overall and politics in general – Mr. Karbauskis or Mr. Skvernelis," T. Dapkus said.

According to the analyst, R. Karbauskis is "simply too occupied by various scandals to worry about matters of state."

"Sometimes he comments on something and that's it. If he is willing to comment at all because finding him is very difficult," T. Dapkus adds.

However the analyst notes that the cabinet has had some achievements – Lithuanian railway, Centre of Registers reforms, forestry and pharmacy reforms.

"On the other hand it is known that a number of cabinet members, ministers do not propose any particular reforms. It is clear that the Prime Minister needs to strengthen his team in the cabinet," T. Dapkus said.

According to the analyst, a number of things do not change, regardless of who is in the post of Prime Minister.

"The Ministry of Finance, it is never reformed. Clans have formed there, they both make all sorts of proposals and have links to associations, business groups, attorney offices and do what they will," T. Dapkus said.

Prime Minister's ratings on the decline

S. Skvernelis was at the peak of his popularity in November 2016 when he became Prime Minister, peaking at 74% positive evaluations and 17% - negative. The ratings of other political and public opinion leaders have declined as well.